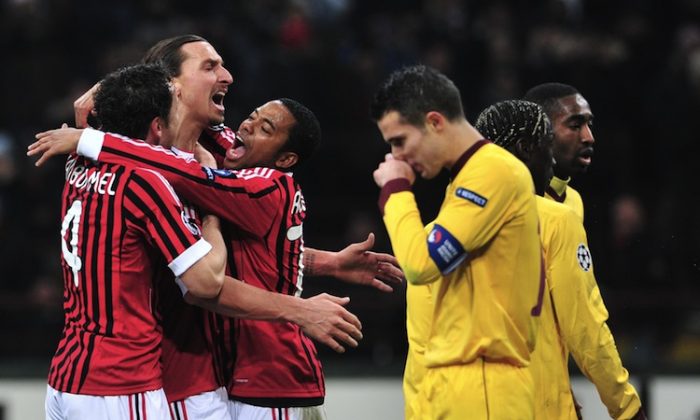 AC Milan demolished Arsenal 4–0 in their Champions League Round of 16 first leg match at the San Siro on Wednesday. In a performance that turned the clock back to the club’s glory days of the 1990s when the Rossoneri was the dominant force in world club football, Arsenal were denied even an away goal that might have given the London club a glimmer of hope for the second leg.

As it is, AC Milan is virtually assured of a place in the last eight of the competition, barring a miracle performance from Arsenal in the return fixture on March 6.

No English club had defeated Milan at the San Siro until Arsenal’s 2–0 triumph there in 2008. Since then, Milan has bowed out of the competition at the first knockout stage in three of the last four seasons.

Recent history then was encouraging for the Gunners who were also boosted by the return of Kieran Gibbs for his first appearance since October following groin surgery. Thomas Vermaelen moved inside to partner Laurent Koscielny, and with Bacary Sagna at right back, Arsene Wenger could field what is probably his first choice back four for the first time in months.

The experience of Tomas Rosicky was preferred to the youthful flair of Alex Oxlade-Chamberlain, who started on the bench.

Although serving a three-match domestic ban, Zlatan Ibrahimovic was fresh and available to lead the line for AC Milan who also welcomed back the exciting Kevin-Prince Boateng from injury.

Indeed it was not long before the Ghana international made his mark. On 15 minutes, lurking in the right-hand corner of the penalty area, he received a chipped pass on his chest, allowed the ball to bounce once before hammering an unstoppable volley into the Arsenal net. For anyone but an Arsenal supporter it was a delight to watch.

Milan appeared to have suffered an early setback just three minutes earlier when the highly experienced Clarence Seedorf was forced to call it a night with a strained hamstring.

However, Milan was clearly in the mood, and even without their skipper, had no trouble establishing their authority. Arsenal had plenty of possession, but too many passes went square or backwards as Milan constantly put pressure on the ball. By contrast, when the home team had the ball, Arsenal’s players were inclined to drop off and allow the opposition to go forward at will.

It came as no surprise therefore, when on 38 minutes, Ibrahimovic was put through on the left side, reached the byline and pulled back an inviting diagonal cross for Robinho who headed firmly downward past Wojciech Szcezsny to give his team a two-goal cushion.

Aware that an away goal would completely alter the complexion of the tie, Arsenal fans remained confident as the teams re-emerged for the second half with Thierry Henry replacing the ineffectual Theo Walcott.

However, just as in the first period, it was at the Arsenal end where most of the action took place. Ibrahimovic was proving to be a real handful for the Arsenal back line and on 49 minutes the Swede wrong-footed a couple of defenders before finding Robinho just outside the area.

The Brazilian lashed the ball just inside Szcezsny’s right hand post for his second of the night, effectively quieting those critics who had been saying he was not scoring enough goals.

Robin van Persie did carve out three opportunities to snatch that vital away goal, but Milan keeper Christian Abbiati, who rejected a move to Arsenal back in 2003, foiled the Dutch master on each occasion with two of the three saves being absolutely top drawer.

With 12 minutes to go, the game (and likely the tie) was finally put out of Arsenal’s reach when Ibrahimovic went down in the box under the challenge of Johan Djourou and a penalty was awarded.

It was arguably a soft call, but there is no denying that the Swedish international had contributed a sterling performance on the night and certainly deserved a goal.

Szcezsny got his fingertips to the ball but there was not enough contact to deflect Ibrahimovic’s powerful kick and Arsenal’s drubbing was complete.

It was a disappointing end for Henry’s loan stint for Arsenal, but on this day, AC Milan was clearly superior.