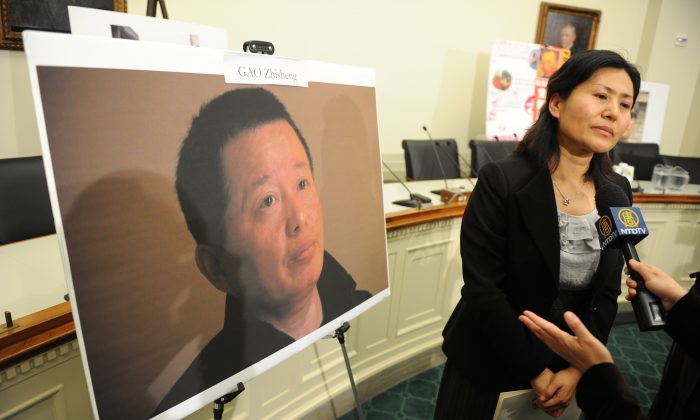 The persecuted Chinese human rights lawyer Gao Zhisheng has told his wife, Geng He, who is based in California, not to participate in a meeting with top U.S. officials because of America’s failure to take a public and principled stance on rights abuses in China.

Geng He, along with the families of other Chinese political prisoners, was set to meet U.S. Deputy Secretary of State Tony Blinken on Sept. 23.

But she canceled her flight to Washington D.C., and posted Gao’s letter, according to posts to her Twitter account on Sept. 22.

“They haven’t talked to us in five years, for all the time we’ve been here, so why should we attend a meeting now?” Geng told The Associated Press from her home in Cupertino.

In Gao’s letter, a translation of which was published by China Change, a website that tracks human rights activists in China, the 51 year-old lawyer began: “Dear wife, when I first heard that you were going to meet the Deputy Secretary of State in private on the 23rd, I thought it was very inappropriate. Forgive me for being blunt: I strongly oppose this.”

Private meetings, Gao implied, are only for those with a guilty conscience, “Why go about it so secretly? What is there to be afraid of? Who’s the one afraid? Who doesn’t want to be seen in the light of day holding the meeting?”

He continued that a meeting with U.S. officials, including the president, is “not what we need right now … especially at a time like now, when the Chinese Communist Party head is rubbing shoulders and celebrating with American politicians.” Gao is referring to Chinese leader Xi Jinping’s formal state visit from Sept. 22 to Sept. 28, which includes a black-tie dinner at the White House with President Barack Obama, and a 21-gun salute.

“Western politicians as a whole have a long history of getting along with evil regimes for their own selfish and greedy ends,” Gao wrote, citing Western colonial powers’ collaboration with the Manchu rulers of the Qing Dynasty, and America selling raw materials to an imperial Japan that was conducting a bloody invasion of China in 1941.

“Since the Clinton era, the American political class has disregarded the basic calls of humanity and muddied itself by getting so close to the sinister Communist Party,” he added. “When these politicians raise their glasses together, justice, and human dignity and conscience are all given a price tag.”

Gao concluded the letter by expressing a hope to be reunited with his family in Beijing, and thanked his wife Geng He for her “unfailing strength in shouldering all responsibilities.”

“I think talk about trade, economic relations cannot be separated from human rights,” Geng told the AP. China and the United States “should put human rights at the front of the conversation, but I don’t think they are willing to do that,” Geng added.

Once hailed as one of China’s top 10 lawyers by the Ministry of Justice, Gao Zhisheng was detained for long periods of time from 2006 to 2014 after he provided legal assistance to practitioners of Falun Gong, a spiritual discipline that has been persecuted by the communist regime since July 1999.

Gao, a native of the northwestern China province of Shaanxi, was brutally tortured in prison, according to letters he wrote. Police inserted toothpicks into his genitals, knocked his teeth loose, and tormented him to the point of temporary memory and speech loss. He was eventually released from detention on Aug. 7, 2014, and today remains under a form of house arrest.

His wife, Geng He, and their two children escaped from China in 2009, and currently reside in California.

Correction: An earlier version of the article said that Gao was first detained in 2005; Gao was initially taken by Chinese security forces in Aug. 2006.