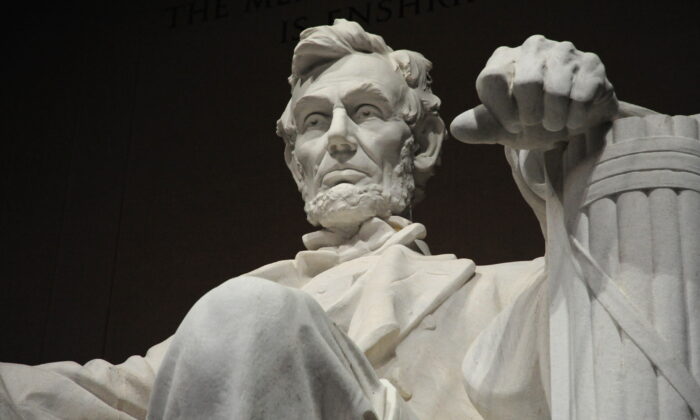 The statue of the 16th President of the United States Abraham Lincoln is seen inside the Lincoln Memorial in Washington on Feb. 12, 2009. (Karen Bleier/AFP via Getty Images)
US News

A bust of President Abraham Lincoln and a plaque of the Gettysburg Address have been removed from a Cornell University Library following a complaint, according to reports.

Randy Wayne, a professor of biology at Cornell, said the library had removed the display, after “someone complained,” according to the higher education news website, College Fix.

The bust of Lincoln and the bronzed plaque of the Gettysburg Address, one of the most revered and widely quoted speeches in American history, had been displayed in the Ivy League school’s Kroch Library since 2013.

Abraham Lincoln’s famous speech was first delivered in 1863 at the dedication of the Soldiers’ National Cemetery in Gettysburg, Pennsylvania, the site of one of the bloodiest and most decisive battles of the American Civil War.

The battle claimed the lives of over 7,000 soldiers from July 1 to July 3 and injured 50,000 more, more than in any other battle of the war.

Wayne told College Fix in an interview that he frequently visited the library and had noticed several weeks ago that both the bust and plaque were no longer on display.

“It’s been there since I can remember,” he said, adding that librarians could not explain why the two historic pieces had been removed when he asked, but they said a complaint had been made about them.

“The Gettysburg Address is an incredible speech,” he said.”We have a handwritten copy in Lincoln’s hand. It is known as the Bancroft Copy. It comes with an envelope signed by Lincoln (using his franking privilege), and a letter to Bancroft, thanking him for requesting a copy of the address to put in a book to be sold for charity.”

“I show these documents to my class, as well as the heavy iron manacles worn by slaves. Yes, we have a Lincoln legacy that has been inspirational to me and my students. To take his words (and bust) out of the hallway says something about our love of liberty.”

Photos that Wayne shared with The Fix showed that there is now a blank white space in the library where the objects used to sit.

A Cornell communications member has said that the Lincoln display was “temporary”.

“President Lincoln’s bust was part of a temporary exhibit on the 150th anniversary of the Gettysburg Address. The bust was on display in the Rare and Manuscript Collections from 2013 to 2021,” Rebecca Valli, director of media relations at Cornell University, told Fox News Digital in a statement on Tuesday.

“Cornell proudly possesses one of five known copies of the Gettysburg Address in Lincoln’s hand. The original is safely sequestered, with a digital facsimile on permanent display. Additionally, five electronic Lincoln exhibitions are available for 24/7 viewing online,” Valli added.

During the protests and riots of summer 2020 following the death of George Floyd while in the custody of Minneapolis police officers, a number of statues and exhibits honoring historical American figures were attacked or defaced.

According to a survey conducted by the Montgomery, Ala.-based Southern Poverty Law Center, a total of 168 Confederate symbols were removed across the United States in 2020 following the demonstrations.

The Epoch Times has contacted Cornell University for comment.