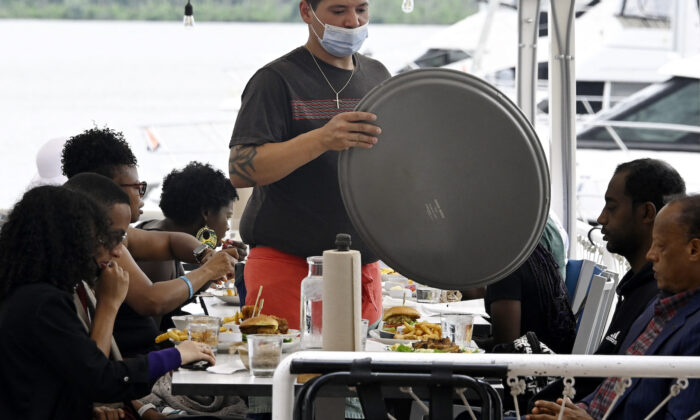 A waiter works at a restaurant in Alexandria, Virginia on June 3, 2022. (Olivier Douliery/AFP via Getty Images)
Economy

About 45 percent of small-business owners in the United States are freezing the hiring of new workers because of high labor costs and skyrocketing inflation, according to the Alignable July Hiring Report.

This is despite 51 percent of small employers still trying to find workers to fill important posts, as the shift in the labor situation this summer has made things more difficult.

The report, released on July 21, followed the latest U.S. Bureau of Labor Statistics (BLS) data, which show consumer prices rose by 9.1 percent in the past year, the highest in more than 40 years. The BLS producer price index rose by nearly the highest percentage ever at 11.3 percent in the previous 12 months.

“This represents a significant hiring shift, and is largely a reaction to mounting labor costs, skyrocketing inflation, fears of a recession, and rising interest rates,” Alignable stated.

The survey found that 4 percent of small businesses were planning to lay off staff and that “some employers noted that they’ve learned to live without the extra staff, making other changes and/or working longer hours themselves.”

This includes 5 percent of firms in real estate and the automotive industry and 3 percent in retail.

Too Expensive to Hire

Some states have more issues with hiring compared to others, and some small businesses reported that they were being more selective in trying to hire the right people for positions, but the majority of business owners believe that it is too expensive to hire right now.

Five other states on the list aren’t far behind, with 48 percent of Pennsylvanian, 47 percent of Ohioan, 41 percent of New Yorker, 39 percent of Massachusetts, and 33 percent of Coloradan small-business owners implementing hiring freezes.

Only 26 percent of all small businesses reported a full recovery back to pre-pandemic revenue levels, while 60 percent stated that their labor costs had increased.

About 18 percent of those employers admitted that wages were 25 percent higher than they were before 2020.

Finally, some employers noted that they had learned to live without extra staff by making changes or working longer hours themselves.

The website admitted that other poll takers are beginning to take into account the potential negative effects of a looming recession.

The other survey reported that at least 48 percent of small-business owners believed that the United States was already in a recession, and another 32 percent predicted one would occur later this year.

The Alignable poll of 5,350 small-business employers was conducted from May 10 to July 19.