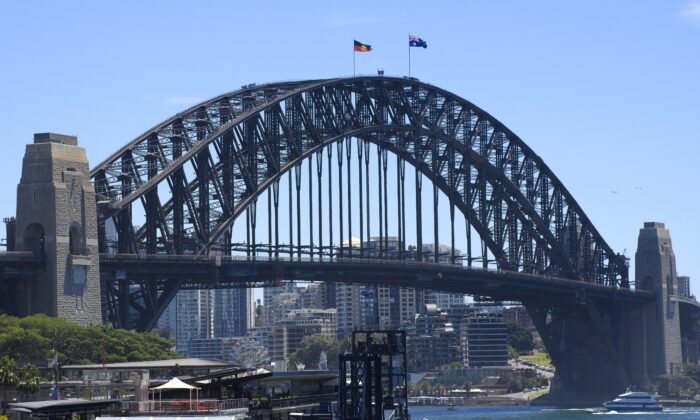 New South Wales (NSW) Premier Dominic Perrottet announced on July 11 that the Aboriginal flag would fly permanently on top of the Sydney Harbour Bridge, replacing the state’s own flag on the iconic structure.

“From today, one of Australia’s most recognisable landmarks will celebrate our Indigenous people and provide an everyday reminder of our nation’s rich history,” Perrottet said in a statement.

“Honouring this commitment is part of our ongoing commitment to recognise the history, culture, excellence and achievements of Aboriginal people.”

Minister for Aboriginal Affairs Ben Franklin said this would save taxpayers A$25 million (US$16.9 million) to install an additional flagpole for the Aboriginal flag, and the money would instead be reallocated to initiatives for the Indigenous people.

“This builds on the NSW Government’s commitment to improve outcomes for Aboriginal people across NSW, following a $716 million investment in this year’s Budget to prioritise Closing the Gap initiatives,” Franklin said.

“I am proud to be part of the Government that will permanently fly the Aboriginal flag above the Sydney Harbour Bridge, and I am happy that a further investment will be made to deliver real outcomes for Aboriginal people across NSW.”

However, not everyone has been happy with the decision, with NSW One Nation Leader Mark Latham saying that Perrottet’s move to recognise the Aboriginal people was at the expense of his own state.

“It seems strange that a political leader who is supposed to honour and serve the NSW Flag has now kicked it off the Harbour Bridge, replacing it with the Aboriginal flag,” he wrote in a Facebook post on Monday.

“In Western NSW, there are towns where the police work on the assumption that every Aboriginal child over the age of 5 has been sexually abused,” Latham said.

“Fear of ‘Stolen Generation’ allegations keeps them locked in dangerous homes, preyed upon by drunk Uncles.”

“It’s an insult to these children and the human tragedy they suffer in our State, under deliberate government policies, that Premier Perrottet’s top priority is a piece of cloth on a bridge.”

Meanwhile, the Aboriginal and Torres Strait Islander flags remained in the centre.

The NSW flag will be downgraded to a redeveloped precinct in the city’s business district on Macquarie Street.

Minister for Metropolitan Roads Natalie Ward said that the NSW flag had to be replaced to recognise the Aboriginal people as quickly as possible.

“As has been outlined all along, the process of installing a third flagpole high above one of the busiest traffic corridors in Australia was always going to be difficult,” Ward said.

“The Macquarie Street East precinct redevelopment will now be expanded to include a prominent NSW State flag, which recognises the important and rich history of Macquarie Street to the heritage of NSW.”