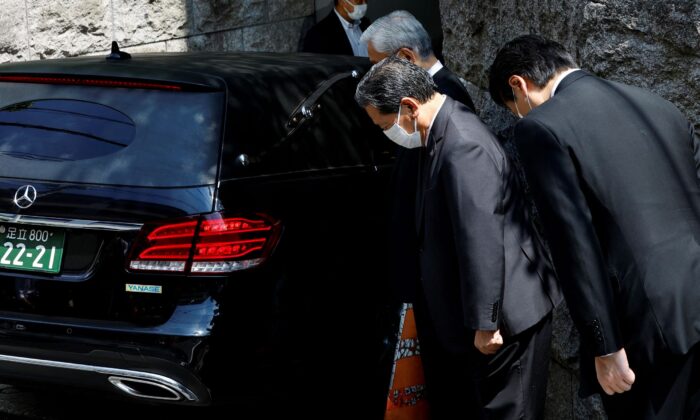 LDP officials pray to the vehicle believed to be carrying the body of former Japanese Prime Minister Shinzo Abe, who was shot while campaigning for a parliamentary election, at his residence in Tokyo, Japan, on July 9, 2022. (Kim Kyung-Hoon/Reuters)
Asia & Pacific

NARA/TOKYO—A motorcade carrying the body of former Prime Minister Shinzo Abe arrived at his home in the Japanese capital on Saturday, as police in the western city of Nara where he was assassinated said there had been security flaws.

Mourners gathered at his residence and at the scene of Friday’s attack in Nara, where Japan’s longest-serving modern leader was gunned down in a rare act of political violence while making a campaign speech. The country’s political establishment called the killing an attack on democracy itself.

Police arrested a 41-year-old man immediately after Abe was shot at close range, and said the suspect had used a homemade gun. The local police force manning the campaign event said on Saturday that security arrangements had been flawed.

“We can’t deny that there were problems with the security plan given how things ended,” Nara prefectorial police chief Tomoaki Onizuka told a news conference.

“I feel a grave sense of responsibility,” he said, adding that police would analyze what exactly went wrong and implement any necessary changes.

Elections for seats in Japan’s upper house of parliament are going ahead as scheduled on Sunday.

Prime Minister Fumio Kishida was back on the campaign trail visiting regional constituencies after making an emergency return to Tokyo on Friday after the shooting.

A metal detection scanner, not normally seen at election events in largely crime-free Japan, was installed at a site in the city of Fujiyoshida where Kishida was due to give a campaign speech. There was also a heavy police presence.

In Nara, some 450 km (280 miles) southwest of Tokyo, a stream of people queued up to lay flowers on a table beside a photograph of Abe.

“I’m just shocked that this kind of thing happened in Nara,” said Natsumi Niwa, a 50-year-old housewife, after laying flowers with her 10-year-old son near the scene of the killing outside a downtown train station.

Niwa said Abe, a conservative and architect of the “Abenomics” policies aimed at reflating the economy, had inspired the name of her son, Masakuni. Abe used to hail Japan as a “beautiful nation.” “Kuni” means nation in Japanese.

A night vigil is due to be held on Monday. Abe’s funeral will take place on Tuesday, attended by close friends, media said. There was no immediate word on any public memorial service.

Police were scrambling to establish details of the suspect’s motive and his preparations for the crime.

Japanese media reported, citing police sources, that the suspect, Tetsuya Yamagami, had told police he believed Abe was linked to a religious group he blamed for ruining his mother financially and breaking up the family.

Police have not identified the group.

The suspect told investigators he had also visited other spots where Abe had made campaign appearances, including in the city of Okayama, more than 200 km (120 miles) from Nara, media reported.

Sunday’s election is expected to deliver victory to the ruling coalition led by Kishida, an Abe protege.

The LDP, where Abe retained considerable influence, had already been expected to gain seats before the assassination. Abe, 67, served twice as prime minister, stepping down citing ill health on both occasions.

But he remained a member of parliament and an influential leader in the LDP after stepping down for the second time in 2020.

A strong election performance by the LDP “could catalyse Kishida to push for Abe’s unfulfilled goal of amending Japan’s constitution to allow for a stronger role for the military,” James Brady, vice president at advisory firm Teneo, wrote in a note.

Kishida visited Abe’s residence in Tokyo to pay his respects on Saturday, the Kyodo news agency reported, alongside mourners clutching flowers and party officials who bowed as the hearse carrying his body arrived.

Abe’s death has drawn condolences from across political divides, and from around the world.

The Quad, a group of countries aimed at countering China’s influence in the Indo-Pacific region which Abe was instrumental in setting up, expressed shock at the assassination in a joint statement.

“We will honour Prime Minister Abe’s memory by redoubling our work towards a peaceful and prosperous region,” said the group, which includes Japan, India, Australia, and the United States.

By Satoshi Sugiyama and Sam Nussey