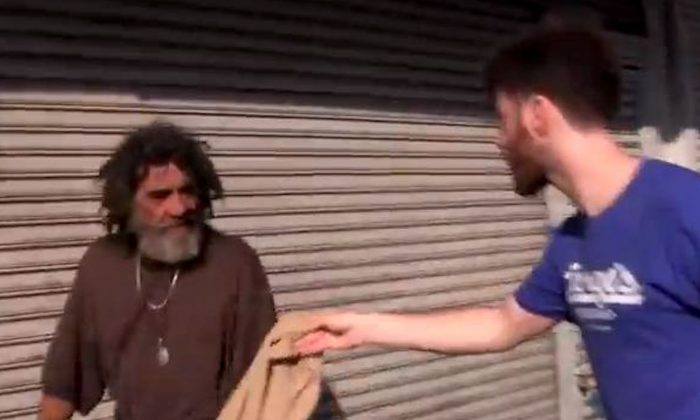 Filmmaker Greg Karber hands a man a piece of Abercrombie & Fitch clothing in East Los Angeles in a video posted to YouTube on May 13, 2013. (Screenshot/YouTube)
Business & Economy

In a video he posted on YouTube May 13, Karber ridicules the company’s CEO Mike Jeffries, who told Salon in 2006 “Candidly, we go after the cool kids. We go after the attractive all-American kid with a great attitude and a lot of friends. A lot of people don’t belong [in our clothes], and they can’t belong.

“Are we exclusionary? Absolutely. Those companies that are in trouble are trying to target everybody: young, old, fat, skinny. But then you become totally vanilla. You don’t alienate anybody, but you don’t excite anybody, either.”

Karber went to “Skid Row” in East Los Angeles and handed clothing out to homeless people. It was a backlash against what he sees as the company’s elitism. It was also a reaction to a 2010 interview published on many websites in which an anonymous Abercrombie manager is quoted as saying the company burns damaged goods instead of giving them to charity.

“Abercrombie & Fitch doesn’t want to create the image that just anybody, poor people, can wear their clothing,” the manager allegedly said. “Only people of a certain stature are able to purchase and wear the company name.”

The Epoch Times could not find the original publication of this interview, and the websites that republished it did not name the source. The Epoch Times is awaiting a response from Abercrombie to inquiries.

Karber calls on people to donate all of their Abercrombie clothing to those less fortunate, and to spread his rebranding campaign through social media using the hashtag #Fitchthehomeless.

Benjamin O’Keefe of Orlando, Fla., posted his Abercrombie petition on Twitter using this hashtag. The Change.org petition had nearly 18,000 supporters as of Wednesday morning. It is titled, “Abercrombie & Fitch CEO Mike Jeffries: Stop telling teens they aren’t beautiful; make clothes for teens of all sizes!”

Abercrombie has not joined many other clothing brands in adding women’s plus sizes. ABC News found the highest size available at the store in women’s clothes is 10. Robin Lewis, co-author of the New Rules of Retail, told ABC that 67 percent of consumers in the United States are now plus size shoppers.