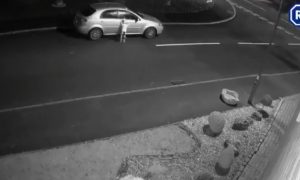 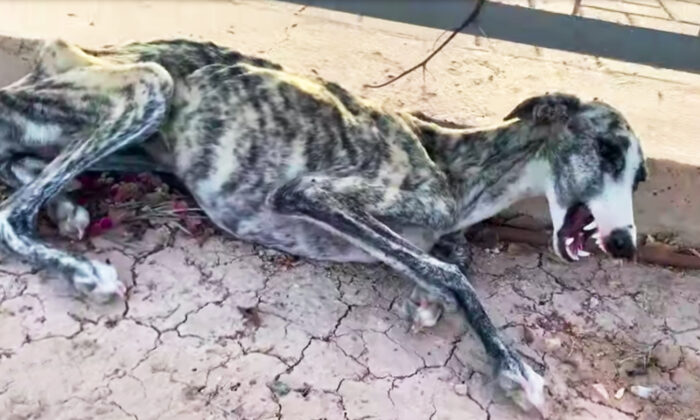 When Matilda was found, emaciated and cowering by the side of the road, she was skin and bones, and her coat was matted. The ex-racing greyhound was terrified; those who found her attempted to get close, but she did nothing but cry out in pain.

Matilda was half the weight she should have been. The group of young men and women who first discovered her on the streets of Murcia, Spain, quickly called Tina Solera, the founder of local dog rescue initiative Galgos del Sol. Tina was driving through town when she got the call.

“I’ve never really heard a dog cry like that before,” Tina told The Dodo. “She sounded like she was in a lot of pain.

“She was biting, and of course the one time I need the muzzle I didn’t have it.” She retrieved a cage from her vehicle and managed to usher the weak, emaciated dog inside. “I was so stressed out with her screaming. I just got her in the van and went.”

“It Was All Emotional”

Matilda’s screaming did not subside. Tina concluded that the desperate dog must have been hit by a car and sustained serious internal injuries. But once at the veterinary hospital, tests showed no such damage.

The emaciated dog was covered in ticks and had a fever. She was given an IV, pain meds, and blankets to sleep on, but ultimately “there was nothing wrong with her physically,” Tina said. “It was all emotional.”

Tina came to a heartbreaking conclusion: Matilda had likely never experienced human kindness before and was terrified by the presence of her rescuers.

“Just a pup, and has already been to hell and back,” Tina posted on Facebook, beside a sweet photo of the rescued dog trying to get comfortable in her new home.

Tina, a mom of two who moved from the United Kingdom to Spain with her family, was devastated by Matilda’s distress. She brought the dog back to her own home, hoping that the comfort, company of kind children, and other dogs would help calm her down.

Slowly but surely, it worked.

After 24 hours in Tina’s home, Matilda came out from behind the chair that was her hiding place and began eating and interacting with her roommates. Tina’s rehabilitated greyhounds rallied around their new comrade; Matilda began to eat and began to warm to Tina’s tentative touch.

The previously emaciated dog began to gain weight and strength. It was then that her true personality had the chance to shine through.

Tina took to Facebook to share the good news. “She’s a wonderful, cheeky, happy dog that now even sits for a treat,” Tina shared. “No more panic at the big wide world, just cuddles and a love for life.”

The Exploitation of Greyhounds

Greyhounds have long been exploited for their hunting and racing abilities, with overbreeding one of the biggest threats to their welfare. Sadly, when a greyhound has expended their usefulness at the end of the hunting season, many are routinely killed or abandoned in the streets.

While this does occur in the United States, it is an even bigger concern in Spain. These abandoned greyhounds, or “galgos,” are the primary target of Tina’s Galgos del Sol rescue and rehabilitation mission.

Tina founded Galgos del Sol after a chance encounter with a stray galgo that pleaded for her assistance. “It’s hard to explain the connection that I felt,” Tina recalled, “but when he looked at me with his soulful eyes and stretched out that needle nose, I knew my life had changed forever.”

Since galgos are not traditionally seen as pets in Spain, they usually end up in pounds where they are routinely euthanized. Tina’s rescue organization, on the other hand, strives to find abandoned galgos safe, permanent homes in the United Kingdom, the United States, and Belgium.

Tina and her team oversee the welfare of approximately 150 galgos, podencos, and mixed breeds at any one time. Galgos del Sol is entirely dependent upon donations and volunteer support.

For Matilda, the project saved her life. In mid-October 2019, Matilda was adopted by a local woman. “Matilda had a great start, loves her new brother and sister, lots of ‘zoomies’ apparently, and then settled down for the night,” Tina wrote on Facebook, sharing Matilda’s first few hours in her brand-new forever home with the shelter’s followers.

“Already miss this little munchkin,” she added, “but they have to move on to the sweet life!”

On Oct. 28, Matilda’s incredible progress was celebrated with an update from her adopter. “Well, Matilda, now called Dizzy, has been with me for a week,” she wrote. “She’s doing very well, and is working hard to adapt to living in a house and to work out her place in the order of things.

“I have to say, she is not what I expected. I thought I would be working to develop her confidence. I expected her to be shy and timid. How wrong I was!”

After months of love, patience, and a safe space in which to recover, Dizzy got a second lease on life.

“I’m delighted with her progress, touched by her spirited determination,” the greyhound’s adopter shared. “She’s sweet and affectionate, I can’t remember what life was like before she arrived.”

Dizzy’s transformation is one to be celebrated and represents what can be achieved when the kindness of many people combine to become a force to be reckoned with.