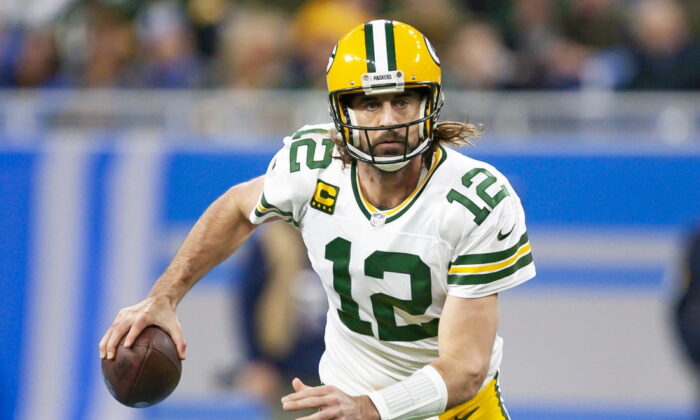 NFL superstar Aaron Rodgers has taken aim at the media’s “witch hunt” of both vaccinated and unvaccinated players and explained why he said he was “immunized” against the virus when he had not received any of the shots.

Rodgers made the comments during a Saturday appearance on Joe Rogan‘s podcast where he stated that he had not been vaccinated because he was in fact allergic to one of the ingredients in the Pfizer and Moderna mRNA vaccines: Polyethylene glycol (PEG).

The CDC advises that individuals who are allergic to PEG should not get an mRNA COVID-19 vaccine.

The Green Bay Packers quarterback told Rogan that he had looked into getting vaccinated in order to keep himself, his family, and his teammates safe but then read the CDC’s advice and decided not to have the shots.

Johnson and Johnson’s shot, the only other one available at the time, had also just been temporarily pulled due to the documented cases of blood clots.

Searching for other options, Rodgers said he then discovered a “protocol that I felt like was the best available,” which involved taking a diluted strand of the virus over a couple of months.

“I was doing basically what the vaccine was supposed to do. It was an oral strand,” he said, adding that he hoped the NFL would understand and grant him a waiver to its policies regarding COVID-19.

While the NFL did not mandate that players be vaccinated in 2021, they did encourage that they get the shots, and unvaccinated players were required to undergo daily testing and had to wear face coverings. The league has since relaxed rules regarding vaccinations among players.

Rodgers said that despite being allergic to the ingredient in the vaccines and being unable to get the shot, the NFL did not grant him a waiver when he presented them with “500 pages of research, from a number of people, that put together case review studies around homeopathy, and immunizations and safety in them, and then also the efficacy of them.”

He claims he was also called a “conspiracy theorist” and began thinking about how he would explain his vaccine status to media outlets.

“They were doing this, I called it a witch hunt, where they were asking every single player ‘Are you vaccinated?’” Rodgers told Rogan. “You know, they were asking a bunch of big quarterbacks and some guys were saying, ‘It’s personal’ or whatever.”

“I had come to the conclusion that I was going to say, ‘I’ve been immunized,’ and if there was a follow-up, then talk about my process,” he said. “But I thought there was a possibility that, I say I’m immunized, maybe they understand what that means, maybe they don’t, maybe they follow up. They didn’t follow up, so then I go to the season with some of them thinking that I was vaccinated.”

“But I knew at some point if I contracted COVID or if word got out … it was possible I’d have to answer the questions.”

Rodgers told reporters in August 2021 that he was “immunized” against COVID-19. However, he tested positive for the virus in November of that same year and was forced to miss a game. It was then that he subsequently revealed that he had not received any vaccines against the virus.

Rodgers told Rogan that he got COVID-19 from a vaccinated player.

“That’s when the [expletive] hit,” he said, “because now I’m a liar, I’m endangering the community, my teammates, all these people. And the attempted takedown of me and, you know, my word and my integrity began.”

Rodgers apologized for saying he was “immunized” against COVID-19 last year in an interview on”The Pat McAfee Show” but stood by his decision regarding the vaccine.

“I made some comments that people might have felt were misleading,” Rodgers said at the time. “To anybody who felt misled by those comments, I take full responsibility.”

“In the end, I have to stay true to who I am and what I’m about, and I stand behind the things that I said,” the quarterback added.