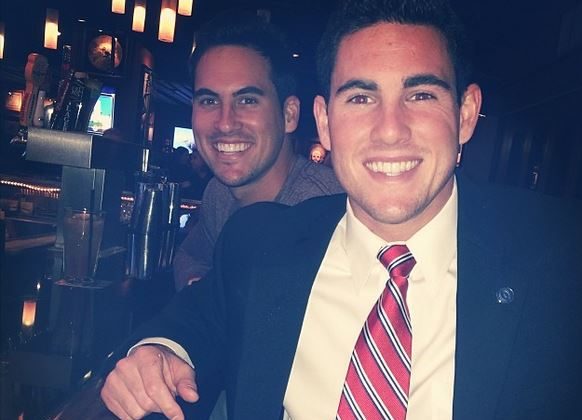 Aaron Murray is already well-known for being a star quarterback at the University of Georgia and then getting drafted by the Kansas City Chiefs–and for his attractive girlfriend Kacie McDonnell–but he’s even better known thanks to his brother Josh being one of the finalists on The Bachelorette.

Josh and fellow finalist Nick Viall are trying to get Andi Dorfman to choose them in the final episode of season 10, which is airing through 10 p.m. EDT (and then the live after special through 11 p.m.).

Aaron’s not a big reality television star but has been encouraging his brother throughout the show.

“Big brother is killing it!!!” he tweeted earlier this year.

“Bachelorette or NBA playoff basketball. Never thought I would be picking the first #teamjosh #givehimarose @jmurbulldog,” he said in late May.

Rumor is that Josh wins and proposes to Andi, making her Aaron’s future sister-in-law.

Meanwhile, Aaron and fellow young quarterback Tyler Bray recently had the offense to themselves as starter Alex Smith and backup Chase Daniels were excused from a practice for rookies and select veterans, reported the Kansas City Star.

Bray is a second-year quarterback while Murray was chosen in this year’s draft, in the fifth round. They divided the snaps.

“Murray was six of seven and took one coverage sack,” it said. “Murray made good by salvaging a high snap from Ben Gottschalk and tipping it to himself before hitting Frankie Hammond Jr. across the middle. Murray also connected with Deon Anthony on a sideline out against veteran Chris Owens.”

He later completed four-for-five in the scoring zone.