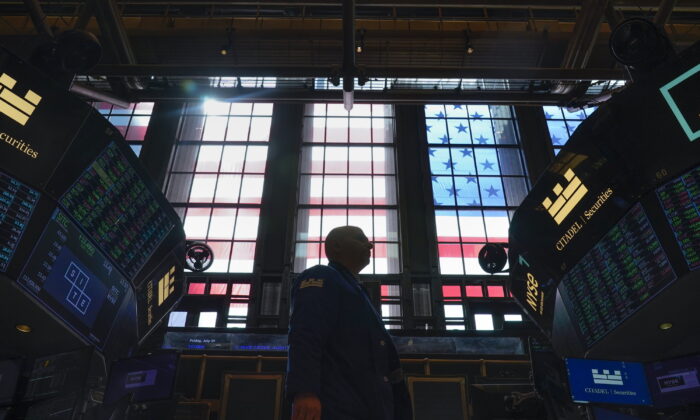 Traders work on the floor at the New York Stock Exchange in New York on July 1, 2022. Stocks wavered between small gains and losses in morning trading on Wall Street on July 6 as worries about inflation, rising interest rates, and a potential recession weighed on the broader market. (Seth Wenig/AP Photo)
Thinking About China

A Whiff of Recession Is in the Air

Will a recession torpedo both the U.S. Democratic Party and China's Xi Jinping?

Economic indicators in the United States and communist China reflect that, despite denials by leaders in both countries, the two biggest economies in the world have been contracting since 2021. And recession poses real problems for Chinese leader Xi Jinping and the Chinese Communist Party (CCP): problems that are strikingly similar to those faced by President Joe Biden and the Democrat Party in the United States.

Let us examine the issue.

Recession in the United States

For decades, the standard macroeconomic definition of a recession has been “two consecutive quarters of declining gross national product.” As CNN reported, “Gross Domestic Product … fell by 0.9 percent on an annualized basis from April through June.” This followed a GDP shrinkage in the first quarter of 2022 at an annualized rate of 1.4 percent. A slam dunk, no?

The Biden administration and ideologically aligned economists have been quick to obfuscate and question whether the United States is indeed “in a recession.” Many have fastened on the continuing rise in jobs numbers as a key indicator that “there is no recession yet.” From the official White House blog (emphasis added): “While inflation is highly elevated, real spending is still growing, powered by one of the strongest labor markets on record and an elevated stock of household savings.”

However, Breitbart reported on Aug. 2 that “job openings in the United States fell sharply in June” from the expected 11.1 million to 10.7 million. The article also noted that hiring rates at companies with greater than 1,000 employees decreased, which probably signifies an increasing reluctance to hire new employees in the face of an economic downturn. And the “real spending” touted by the White House is due to inflationary federal spending bills passed by congressional Democrats.

What are other signs of a recession in the United States—or, at the very least, a “significant economic downturn”?

“Initial jobless claims in the United States rose for a second week to the highest level since Nov. 26, 2021, indicating a contraction in the labor market, according to the U.S. Labor Department on Aug. 11,” as reported by The Epoch Times.

Americans’ credit card debt jumped by $46 billion in the second quarter of 2022, representing a year-to-year increase of “13 percent, the largest increase in more than 20 years,” as reported by Breitbart.

From that same Breitbart article: “Real average weekly wages fell one percent in June, 0.9 percent May, and were flat in April. Weekly earnings in June were 4.4 percent below the year-earlier level after adjusting for inflation.”

An increase in credit card debt coupled with declining real wage is a harbinger of trouble ahead and can only result in a slowdown in consumer spending in the near future.

That BLS report also stated, “The second quarter of 2022 is the second consecutive quarter in which output decreased while hours increased.”

And on Aug. 15, Zero Hedge reported that “the New York Fed’s Empire State Manufacturing Survey unexpectedly cratered from 11.1 to -31.3, [which was] the second largest monthly decline in the index on record, and among the lowest levels in the survey’s history.” Furthermore, as an indication of a decline in future activity, “the new orders index dropped thirty-six points to -29.6, and the shipments index plummeted nearly fifty points to -24.1.”

These are more indications that the U.S. economy is recession-bound. It is just an academic exercise at this point to determine when the recession actually began.

State-run Chinese media have been trying to convince (lie to?) readers that the Chinese economy is “in recovery” and headed for a GDP increase year-over-year of 5.5 percent, as reported by Global Times. Or this China Daily report on Aug. 15 that claimed the following, under the headline “China’s Economy Maintains Recovery in July”:

“Retail sales, a key measurement of consumer spending, rose by 2.7 percent year-on-year in July, down from the 3.1 percent rise in June. Fixed-asset investment, a gauge of expenditures on items including infrastructure, property, machinery and equipment, increased by 5.7 percent in the January-July period compared with a year earlier.”

Communist Chinese statistics being what they are (concocted out of thin air), keen observers turn to foreign reporting for a more accurate accounting of China’s economy. For example, a Wall Street Journal report, on the same day as the above China Daily article, conveys a decidedly different story: “Data on factory output, investment, consumer spending and real estate, among other indicators, showed China’s economy stumbled in July, prompting the central bank to cut interest rates.”

Furthermore, The Wall Street Journal reported, “Chinese 10-year government bond yields fell to their lowest level since the early months of the pandemic in 2020.”

Further indications of an ongoing recession in China can be found in MSCI’s China Index. As described here, “The MSCI China Index captures large and mid-cap representation across China A shares, H shares, B shares, Red chips, P chips and foreign listings.” The index has plummeted from a high of around 250 in March 2021 to around 140 at the end of July 2022. That equates to minus 21 percent performance in 2021 with a projected minus 25 percent for 2022.

The Daily Shot’s Lev Borodovsky posted on Twitter on Aug. 10: “In China, earnings have dropped considerably, on par with some of the worst profit contractions in history.” Recession we much, as Al Sharpton might say?

There are other indications of a Chinese recession:

On July 14, Zero Hedge quoted a Bloomberg report about massive troubles in China’s real estate sector: “A rapidly increasing number of ‘disgruntled Chinese homebuyers’ are refusing to pay mortgages for unfinished construction projects, exacerbating the country’s real estate woes and stoking fears that the crisis will spread to the wider financial system as countless mortgages default.”

The debt sell-off among Chinese developers has expanded to previously top-performing developers like Country Garden Holdings, the largest Chinese builder by sales volume. And the associated under-performing loans are subsequently placing a lot of debt risk on Chinese banks, as mortgages make up about 20 percent of Chinese bank loans. As a result, shares of Chinese banks slid to a two-year low on June 15.

As reported by The Jamestown Foundation on July 19, “The Chinese economy grew by barely 0.4 percent in the second quarter of this year, which is the second worst figure recorded in the past 30 years.” Furthermore, China’s total social debt (including borrowings by administrations, enterprises, and households) increased by $2.5 trillion year-on-year.” This is eerily similar to rising U.S. credit card debt and is another harbinger of a recession in the offing.

To amplify, from a report in The Wall Street Journal two weeks later, on July 31: “Sales at [China’s] top 100 property developers fell 39.7 percent in July from the same period last year to the equivalent of $77.6 billion, or 523.14 billion yuan.”

That Journal article contained even more grim news for China’s depressed real estate market: “Troubled property developer China Evergrande Group sketched out the contours of a plan to restructure its billions of dollars in debt and said its contracted apartment sales in the first six months of the year had fallen about 97 percent from the same period a year earlier.”

As a further indication of the widening real estate crisis, “China is considering a plan to seize undeveloped land from distressed real estate companies, using it to help finance the completion of stalled housing projects that have sparked mortgage boycotts across the country,” as reported here. These unprecedented actions reflect real problems in China’s now-recessionary economy!

Political Headwinds for Both Countries

A U.S. recession-in-being dampens prospects for the Democratic Party in the U.S. mid-term elections in November. Democrats currently control both Houses of Congress as well as the presidency and executive branch. Economic issues dominate the concerns of voters across all demographic groups, as even the left-leaning Monmouth University poll showed in June (pdf). And the economic policies that have resulted in 8.5 percent inflation and enormous rises in the cost of gasoline, food, and other basic necessities can be laid at the feet of the Democrats, as discussed here.

Furthermore, the Democrats’ misnamed “Inflation Reduction Act” will almost certainly increase inflation. Increasing government spending is the opposite of what needs to be done to lower inflation. A spike in inflation before November will doom Democrats, and accelerating problems in the jobs market will be the final nail in their political coffins.

Xi Jinping has a similar problem. For over a year, he has laid the groundwork within the CCP for elevation to an unprecedented third five-year term in power. His “historic resolution” to that effect was approved by acclamation at the sixth plenary session of the 19th Central Committee of the CCP last November. And to fortify his control and get a leg up on CCP factional infighting before the 20th National Congress of the CCP this fall, Xi has been “elevating trusted subordinates into party and government posts that command key levers of political power,” according to the Journal.

But as the economic crisis expands into a recession in China, Xi’s grip on power becomes more tenuous. Is his third term inevitable in the face of severe and intractable economic problems, or will he be displaced by another?

Perhaps both the U.S. Democrat Party and Xi’s CCP faction will be swept aside in November. The “R” word could be what makes the difference.