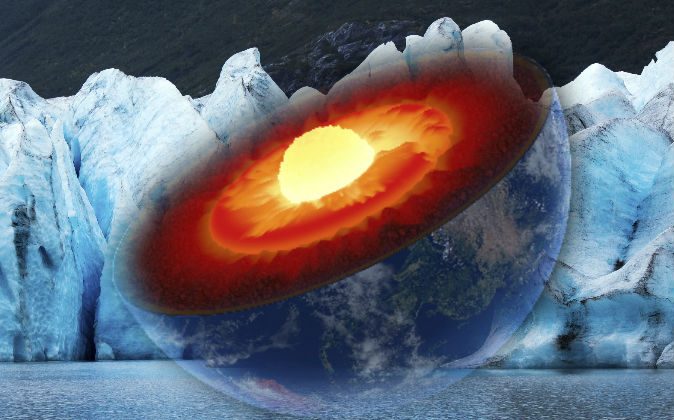 A Vast Ocean Inside the Earth: The Deep Unknown

Scientific theories are often repeated and summarized so often that we forget they are merely “theories,” and not facts. When you think of “the center of the Earth,” you probably picture the classic diagram from your high-school science textbook showing a cross-section of the Earth’s layers like those of an onion: the crust, the upper mantle, the lower mantle, the outer core, and the inner core.

Humankind has only penetrated about 8 miles into the Earth. We’ve filled in some 3,992 miles with theories.

Many people take this as simple, clear fact. But humankind has only penetrated about 8 miles into the Earth; it’s about 4,000 miles to the core. We’ve filled in some 3,992 miles with theories.

Of course, the theories have good reasoning behind them. They are based on the geological phenomena we have observed. Yet a discovery made in 2014 is exemplary of how our planet may be a lot different than we generally think.

His team paid about $20 for a diamond found by artisan miners in the Juina area of Mata Grosso, Brazil, in 2008. Inside the brownish diamond, they accidentally found a mineral called ringwoodite while looking for a different mineral.

The ocean inside the Earth ‘might have as much water as all the world’s oceans put together.’
— Graham Pearson, University of Alberta

Ringwoodite had been found in meteorites before, but this was the first time it was found in Earth. The ringwoodite was significant because water was trapped inside it, and it was formed about 250 to 350 miles below the planet’s surface—the so-called “transition zone” between the upper and lower mantle.

This suggests there’s an ocean inside the Earth. And that ocean “might have as much water as all the world’s oceans put together,” said Pearson in a University of Alberta news release.

If the diamond is representative of the part of the deep Earth where it formed, a massive ocean exists there. It’s not certain yet, but finding the ringwoodite it is a major step toward confirming that water is an important part of the interior of the Earth.

The Hollow Earth theory gained popularity in the 19th century, and some today still hold it to be as viable as any other theory.

This massive ocean would greatly impact plate tectonics, the formation of volcanoes, and how rock shifts below the crust—basically all of geology.

Pearson’s findings were published in Nature in March 2014.

The discovery recalls the classic science fiction novel, “Journey to the Center of the Earth,” written by Jules Verne in the 19th century. A brave scientist discovers a passage to the center of the Earth, and within the depths he finds an ocean as well as land and intelligent life.

The Hollow Earth theory gained some popularity in the 19th century, and some people today still hold it to be as viable as any other theory even if it is scoffed at.

Is the Moon Man-Made? Hollow?

As we explore the mysteries of outerspace, we stand on a world that remains a mystery to us in many ways.