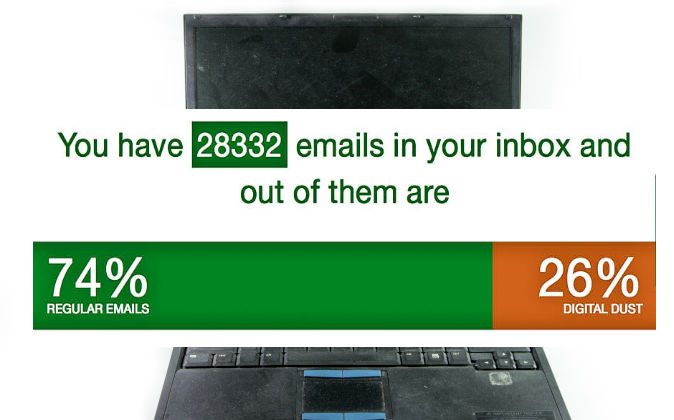 All that digital "dust" that accumulates eats up energy. While electronic communication is often seen as more eco-friendly, it isn't without its impact. Background: Dusty computer. (Sculder19/iStock/Thinkstock)
Environment

A Vacuum Cleaner for the Web’s Dusty Corners: Your Emails Consume Energy

Electrolux’s campaign to clean up e-mail inboxes may be a marketing stunt, but it highlights legit concerns about our online energy-sucking ways.

Ah, if only it were possible for each one of us to suction away the carbon emissions we contribute to the overburdened atmosphere, much as we vacuum dirt from the carpet.

Appliance maker Electrolux is promising to help us do exactly that, at least for one oft-neglected portion of our personal greenhouse gas output. The Swedish company, known best for its century-long history of making vacuums, has unveiled a free web-based World Wide Vac, a tool to help people eliminate carbon emissions attributable to the junk clogging their e-mail accounts.

The World Wide Vac analyzes any Gmail account and identifies “digital dust” – spam, social notifications, promotions and old, unwanted e-mails – and calculates how much carbon is generated due to the Google server electricity required for its storage.

For example, the digital dust reading for one particularly disorganized climate journalist’s Gmail revealed an inbox containing 125,678 e-mails, about 50 percent of which were old and unopened, and 25 percent social or promotional. The World Wide Vac estimated that the personal cloud generated by such an inbox added up to 207 pounds of CO2 emissions, equivalent to driving a car 457 miles. (The U.S. Environmental Protection Agency’s carbon equivalency calculator, likely reflecting math based on a less fuel-efficient vehicle, puts it on par with driving 224 miles.)

It All Adds Up

The point of the exercise, says Electrolux, is to recognize how it all adds up. “Every year as we surf the Internet, send e-mails and share images we release as much 830 million tons of CO2, which is on-par with the whole aviation industry,” Electrolux says in its promotional material. The World Wide Vac guides users through a small-, medium-, or large-scale e-mail inbox cleaning (or none, if you, like the above-mentioned journalist, instead prefer the idea of sorting your own e-mail by hand, some day.)

Electrolux is not the first company to provide help in cleaning e-mail inboxes; other companies have developed similar algorithms (SaneBox and Mailstrom are two), and Google has its own instructions for bulk deleting and organizing mailboxes.

But the World Wide Vac may be the first mail-cleaning utility with an overt climate change angle.

On the one hand, it’s a bit of clever PR – part of Electrolux’s campaign to promote its new energy-efficient UltraFlex bagless vacuum cleaner, which is designed to reach everywhere. “We thought, ‘What if we could stretch that idea to reach through people’s screens?'” said Electrolux chief information officer Marcus Claesson in – what else? – an e-mail. “Cleaning is in our DNA.” It also helps highlight Electrolux’s pledge to cut its own CO2 emissions 50 percent by 2020, at a time when the company is poised to take its place as one of the world’s largest appliance companies, with its $3 billion purchase of GE Appliances, announced in September.

But the World Wide Vac stunt turns on a fundamental truth: We are ratcheting up our electricity consumption with our increasingly connected lifestyles, seldom pausing to consider the fossil fuels burned to facilitate Internet communication.

The U.S. Energy Information Administration last year calculated that even though home heating and cooling have become vastly more efficient, those gains have been canceled out because the average U.S. household is using so many more electronics. And now, as more and more personal data is stored in “the cloud,” the World Wide Vac is one effort to calculate each user’s contribution to the growing energy demand at Internet company server farms.

Energy required to power and cool the millions of servers supporting the Internet has doubled in the past five years and is growing so fast that, within a decade, servers globally will demand more electricity than what is used annually by Japan and Germany combined, according to a report by the Digital Power Group.

It does not necessarily follow that deleting e-mail will reduce that energy demand immediately; Internet companies are going to maintain what storage space they deem necessary for operations. If all users kept less e-mail and other data in storage, that amount of capacity required arguably would be less. But cloud computing also can be more energy efficient than some on-site energy storage options, especially for business operations, some reports have found.

A Carbon Footprint of Our Archives

That said, Cook notes that “cold” storage of old e-mail and photos takes very low levels of power to maintain. It is the initial delivery of data that has the bigger energy footprint, he said in an e-mail exchange. The biggest and fastest growing Internet-related energy demand is the streaming and downloading of increasingly bigger chunks of content, particularly video, he said.

“I would agree it is certainly worthwhile to delete storage you are not using or otherwise do not need, but it’s quite important to look at what is powering where your e-mail or photos are being delivered and stored – and is that coming from coal, or from renewable sources?” Cook said. Greenpeace’s latest report on the subject, Clicking Clean, provides an analysis of energy mix of the leading Internet companies, and Cook said Greenpeace aims to include more online brands in future reports.

Google, which currently gets about 35 percent of its energy from clean power and has committed to a goal of 100 percent, generally gets good marks from Greenpeace. The enviro group notes Google has signed long-term power purchase agreements that have helped green the grid providing power to its data centers in Iowa, Oklahoma, and Finland; has invested $1 billion in renewable projects; and has improved transparency about the carbon footprint of its cloud.

In fact, Electrolux said its World Wide Vac relies on Google’s calculations that the average Gmail user is responsible for 2.6 pounds of CO2 equivalent emissions per year. “Google is doing an amazing job at the forefront of environmentally smart and efficient data storing,” said Claesson. “This is our way of contributing from the other end, helping people to clean their personal clouds in a simple way.”

Republished with permission from The Daily Climate. Read the original.