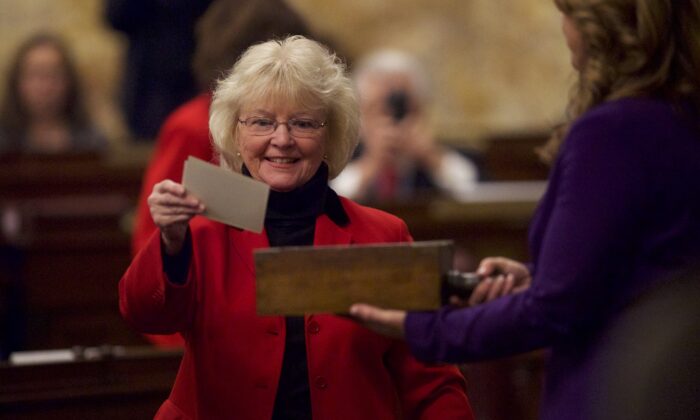 An elector places her signed ballot into a ballot box in the House of Representatives chamber of the Pennsylvania Capitol Building in Harrisburg on Dec. 19, 2016. (Mark Makela/Getty Images)
Viewpoints

A Supreme Court Case That Could Affect the 2020 Election

We don’t elect our president directly. The president is elected about six weeks after the November popular vote by presidential electors chosen by the people.

Those seeking to be presidential electors generally announce to the voters which candidates they will support for president and vice president. Nearly all electors honor their pledges. Occasionally, however, they change their minds and vote for someone to whom they aren’t pledged.

Some states have statutes punishing or purporting to remove any elector who does change his or her mind. This spring, the Supreme Court will decide two cases challenging laws of that kind, one adopted in Washington state and one in Colorado.

The cases arose this way: After the November 2016 popular vote, some Democratic electors became convinced that they shouldn’t support a candidate as flawed as Hillary Clinton. Some Republican electors became concerned about the qualities of Donald Trump. They began to explore other possibilities.

The Washington state dissenters cast their ballots for Powell, but the state fined them $1,000 each for doing so. Colorado officials went further: They browbeat two of the dissenters into voting for Clinton. When the other dissenter tried to vote for Kasich, they physically removed him and replaced him with someone willing to do as he was told.

The Washington and Colorado electors then challenged the state laws that prevented them from exercising their best judgment. The Washington Supreme Court upheld its state’s law, but a federal court of appeals voided the Colorado measure. The two cases were consolidated in the U.S. Supreme Court.

After a first glance, you might say, “Why isn’t it constitutional for a state to hold an elector to his pledge? After all, voters elected him based on that pledge!”

But when you look below the surface, other issues come into focus.

What the Constitution Says

The Constitution’s framers knew that our presidential election system had to operate well or the republic wouldn’t survive. A bad system could produce civil war, dictatorship, mob rule, or (as in the case of hereditary monarchy) gross incompetence.

So, in crafting our presidential election procedure, the framers considered a long list of factors. (Despite what you hear these days, slavery wasn’t a major item on the list.)

For example, the framers believed that a president should have wide popular support. But they had to avoid an election procedure that might produce mob selection of dictators or demagogues.

Similarly, the framers knew that the insights of congressional and state leaders entitled them to some voice in the procedure, but that they shouldn’t control it.

There were other factors as well, and the Constitution’s presidential election procedure was the product of careful balancing of all of them.

But in one respect, the system hasn’t operated as intended: The best judgment of presidential electors has been largely abolished by state laws that convert them into mere marionettes.

There’s no serious doubt that when our Founders provided for “electors” to vote by “ballot,” they meant electors who exercised their best judgment and voted by secret ballot.

Defenders of puppet-elector laws usually admit this, but they have some counter-arguments. First, they point out that the Constitution gives the states power to appoint presidential electors. They argue that the power to appoint includes the power to control. Second, they claim that the 12th Amendment, adopted in 1804, changed the rule that electors could exercise discretion.

However, the first argument disregards how the Constitution actually works. Under the Constitution, a mere power to appoint does not create a power to control unless the document says so. It does say so regarding executive branch officers: One part of the document allows the president to appoint those officers and other parts empower the president to control them. But the rule is otherwise for federal judges: The president appoints them, but retains no authority to control them.

The latter situation also applies to electors: The Constitution empowers the states to appoint them, but doesn’t grant any power of control.

As for the claim that the 12th Amendment changed elector discretion: It’s just not true. The amendment altered some things, but it left the Constitution’s language governing elector discretion essentially unchanged. Moreover, the debates in Congress over the 12th Amendment show that the authors of the amendment still expected electors to exercise their best judgment through secret ballots—even though political parties had begun to dominate the popular vote.

Advocates of puppet-election laws fail to understand that electoral discretion is part of ensuring that the presidential election system works correctly.

Of course, in the overwhelming majority of cases, presidential electors merely vote according to their pledges. And in most elections, this works fine. But allowing electors to exercise discretion would encourage leading statesmen to seek the job. Then, when problems do arise, the electors would have the skills needed to solve them.

Following are examples of situations in which elector discretion is important:

The Constitution’s presidential election system represents an ingenious and effective response to many different issues. The Supreme Court should, and probably will, void state laws that attempt to alter it.

Rob Natelson is a senior fellow in constitutional jurisprudence at the pro-freedom think tank Independence Institute in Denver. He was a law professor for 25 years and is the author of “The Original Constitution: What It Actually Said and Meant” (3rd ed., 2014).