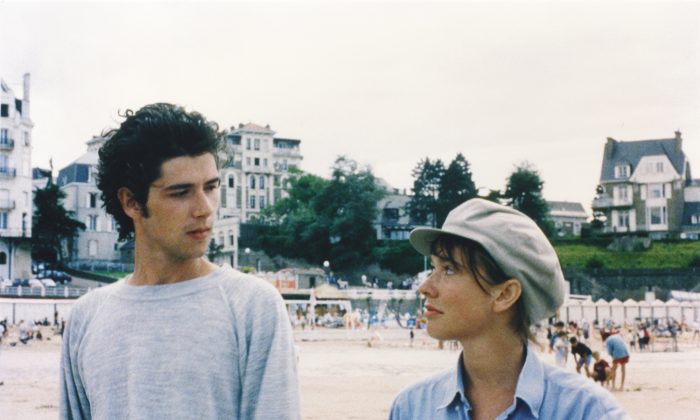 ‘A Summer’s Tale’: Rohmer at the Beach

It might be summer, but Eric Rohmer characters never get a vacation from their personality hang-ups. Strangely, they are still good company, thanks to the auteur’s feather-light touch.

Despite its place in one of Rohmer’s great thematic film series, the “Tales of the Four Seasons” quartet, as well as a young cast predominantly dressed for the beach, the 1996 film “A Summer’s Tale” is only now getting a proper American theatrical release.

Gaspard is a dedicated musician, who has recently completed a master’s degree in mathematics, but he is not very smart when it comes to women. He has come to Dinard in Brittany for a short holiday before his first grown-up job commences, in hopes his pseudo-girlfriend Lena will join him there.

Much to his frustration, but not necessarily his surprise, she has flaked on him. In spite of his general mopiness, an attractive ethnology student waitressing in her aunt’s café takes a liking to Gaspard.

Also separated from her lover, Margot assures Gaspard that there will no possibility of romance between them, but she encourages him to pursue Solene, a casual acquaintance of hers.

After a bit of prodding, Gaspard successfully acts on her advice. Yet, just as his fling with Solene threatens to get serious, Lena resurfaces. Will he sabotage his flawed romance of the moment for an even more problematic relationship from the past, while taking for granted all the chemistry we can plainly see in his platonic friendship with Margot?

It puts the socially awkward Gaspard in quite a quandary, but Margot is openly dismissive of his self-centered confusion.

Most viewers will not be very impressed by Gaspard’s whiny vacillations either, but Amanda Langlet’s Margot is a different story. It is worth enduring his neurotic dithering so we can hear her undercut him.

Formerly the young star of Rohmer’s “Pauline at the Beach,” in 13 years Langlet had matured into a charismatic young woman, whose charm and intelligent presence consistently elevates “Summer.” It is strange that she has been so rarely seen by international cineastes outside Rohmer films, yet Melvil Poupaud’s star continued to rise after his gawky turn as Gaspard.

Aurelia Nolin is not exactly a household name either, but viewers can well understand why Gaspard has such a hard time getting over her. As is usually the case for Rohmer’s screenplays, “Summer” is a talky film, but the primary cast makes his often brutally honest dialogue sound natural and spontaneous.

It is very Rohmeresque, even though it is not set in his familiar Paris. In fact, he consciously anchors “Summer” along the Brittany coast, capitalizing on the local color and sea shanties.

Always a considerate host, Rohmer carefully marks the passing of each day leading up to Gaspard’s scheduled departure and deliberately identifies the relevant landmarks for the audience. Even after the HD restoration, “Summer” never dazzles visually, but it still makes Dinard look like a lovely place to visit.

There are profundities to be found among its prosaic exchanges. It can be pointed at times, but it is never a rude or crass viewing experience. Sharply observed but scrupulously forgiving of human foibles, it is a classic example of the Rohmer style.

Highly recommended for Francophiles and those who appreciate intimate chamber comedy-dramas, “A Summer’s Tale” (finally) opens this Friday, June 20, in New York at the Lincoln Plaza Cinema.