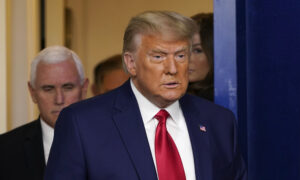 Macy’s did their Thanksgiving Day Parade differently this year. It was held on 34th Street, blocked off to the public, and live-streamed.

Macy’s says they made these crowd-controlling changes because of the CCP virus pandemic.

The parade’s executive producer Susan Tercero said the day before that, this way, everybody can stay home safely.

“I think the biggest thing that we’re gonna be looking at this year is ensuring that we reduce our crowd size, whether that’s internally in the parade itself. And then we’re gonna be really blocking off the areas to make sure that we’re producing a show for television.”

NTD tried getting a good view of the streets and found that this was the best view we could find.

According to the parade’s team, they flew the giant balloons without their 80 to 100 balloon handlers. Instead, they got rigged, anchored vehicles to fly them down a one-block stretch.

Macy’s partnered with some networks to broadcast the socially distanced special.