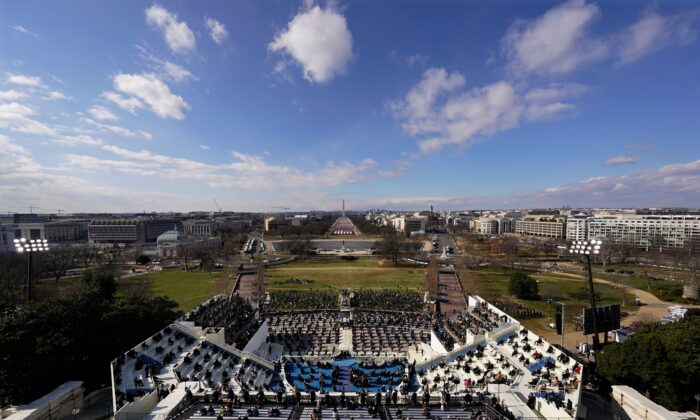 Guests and spectators attend the 59th Presidential Inauguration for President Joe Biden at the U.S. Capitol in Washington on Jan. 20, 2021. (Susan Walsh/Pool/AFP via Getty Images)
Viewpoints

A Small but Practical Step to Start Dismantling the Regime

In January, I wrote a practical column, that is, a column that, unlike so many opinion columns, actually put forth a simple pragmatic suggestion that, if implemented, would ease partisan tensions and otherwise improve life across the fruited plain.

In brief, I suggested that the next presidential inauguration take place somewhere other than Washington.

Some people laughed at that suggestion.

Surely, I wasn’t being serious.

On the contrary, although I recognize the novelty of the suggestion, I was entirely serious.

There’s nothing in the Constitution that specifies where that ceremony should take place.

Indeed, the Constitution is gratifyingly quiet about all such details.

It specifies the minimum age at which a person is eligible to be president (35); it says he must be a “natural born Citizen,” and that he has been “fourteen Years a Resident within the United States.”

It also provides details, some of which have changed over the years, about how electors are to be chosen, how many there are to be, and who is ineligible for that role.

It also sets forth an “Oath or Affirmation” of office that a person who is elected president is required to pronounce before he takes up his duties.

This solemn formula will sound almost comical to ears tainted by modern disillusionment, but it’s nevertheless worth repeating: “I do solemnly swear (or affirm) that I will faithfully execute the Office of President of the United States, and will to the best of my Ability, preserve, protect and defend the Constitution of the United States.”

Those titters you hear are from the scribes and Pharisees who populate our government but who wouldn’t have a clue about what it might mean to preserve, protect, and defend the Constitution of the United States.

But one thing the Constitution is silent about is the inauguration.

The word doesn’t appear anywhere in the document.

There’s no suggestion that the ceremony—the swearing-in—should take place in Washington or any other particular spot.

I understand that the inauguration, like the Oscars, is a ceremony festooned with precedent and expectation.

But with each passing day, it becomes clearer that Washington is the source, the living embodiment, of so much that’s wrong with our society.

For one thing, it’s an overwhelmingly Democratic city, which means that it can’t fairly represent a diverse republic in which there are many legitimate points of view that challenge the woke, progressive consensus that underlies the Democratic agenda.

The issue isn’t just partisan, however.

Washington is corrupt in a bipartisan sense.

All you need to do is walk up and down its majestic streets and avenues to see that the city is littered with the architectural evidence of special pleading, favor mongering, and influence peddling.

Every second building houses a company or union or industry with its hand out and its snout searching avidly for the public trough.

The founders of the republic would have been disgusted by the rank and rancid cauldron of corruption that the country’s capital city has become.

Anything that can be done to diminish its role in our national life should be embraced.

We can begin in January 2025 by holding the next presidential inauguration elsewhere.

In my earlier column, I suggested Mar-a-Lago as a suitable spot, but I noted that I’m not wedded to that venue. I suggested it simply because it would probably be convenient for the people who will be involved come January 2025.

But many other places would be just as good.

I know, I know, CNN and the rest of the woke media would be outraged by this break with tradition.

Hitherto, the wardens of wokeness have had this major ceremonial event take place on what amounts to their ideological home turf.

I think it’s time to spread the wealth around, just as Barack Obama told Joe the plumber he wanted to do.

That’s where I would start: by moving the inauguration.

But that’s only a start.

The goal is much more ambitious.

It’s to downgrade the place of Washington, the spirit as well as the city, in the metabolism of American political life.

As I noted in my January column, “legitimacy is draining out of our governing institutions at an alarming rate.”

“Stanching that debilitating flow,” I wrote, “requires that we redirect our attention away from the greedy puppet show in Washington to the true source of legitimacy, which is with the people.”

When Thomas Jefferson lobbied to move the capital to Washington (it had been flipping back and forth between New York and Philadelphia for a decade or more), he did so partly to locate it closer to his home state of Virginia, probably the most prosperous state in the fledgling union.

But he did it also in an effort to locate the capital on more or less politically neutral ground.

The capital of the republic was meant to be above partisan affiliation.

Alas, as the years have gone by, Washington has become a wholly owned subsidiary of the regime party, also known as the administrative state.

That political dispensation is defined by the progressive, Democratic agenda, but its overflowing ranks are stuffed to the gills with members of both parties.

Every honest person, and quite a few dishonest ones, understands this.

Ivory soap used to brag that it was 99.44 percent pure.

Washington is at least 99.44 percent in the pocket of the regime.

You see this, for example, in the Jan. 6 committee, which is about as straightforward a partisan attack machine as would be possible to contrive.

It’s illegally constituted, its findings and media are shot through with tendentious, not to say mendacious, statements and distortions, and its proceedings are being conducted more like the police in “The Lives of Others“ than a traditional American congressional investigation.

The Jan. 6 Committee is the perfect objective correlative of the regime. Its members are part of the swamp, as are the vast majority of the media that covers, or, rather, that runs cover for and seeks to justify its activities.

Moreover, other apparatuses of the regime—the Department of Justice, the courts—are also wholly owned subsidiaries of the progressive, anti-Trump machine.

The reputation of the Jan. 6 Committee on Main Street is in tatters because its antics are so clearly an expression of a wholly corrupt system, epitomized by the city that battens on the public treasure and the public trust.

There are messy ways that other countries throughout history have dealt with a regime party that’s so thoroughly corrupt.

The process isn’t edifying, even if, in the end, it’s cathartic.

A kinder, gentler alternative would be to treat Washington as Hercules did the Augean stables.

I doubt that the Potomac, suitably diverted, would sport enough water to do the job, but moving the government out, piece by piece, beginning with the ceremonial occasion of the inauguration, might be the least expensive, and least sanguinary, alternative.