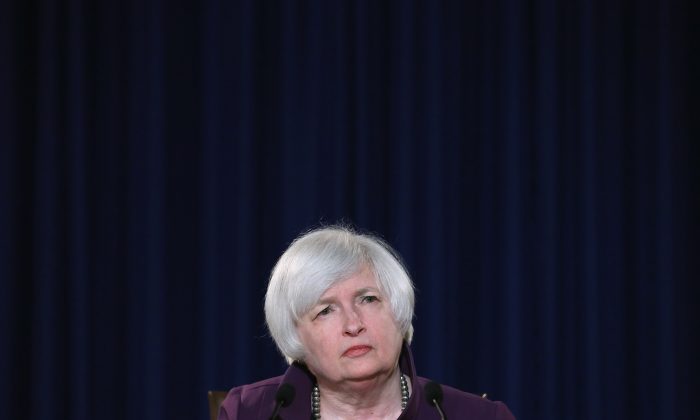 China has dominated the headlines in recent weeks, but the Fed also had its part to play in the recent market rout. Some analysts even said knowing full-well the consequences.

Just after the devaluation of the yuan on Aug. 11 and the release of the July Fed meeting minutes on Aug. 19, Western markets started to tumble.

The minutes made speculators believe the Fed would hike rates—for the first time in a decade—at its Sept. 16–17 meeting.

The Fed believes the economy is doing well enough and rightly so: The GDP was revised higher from 3.2 percent to 3.7 percent for the second quarter of 2015. The official unemployment rate—with all its caveats—has declined from 10 percent to about 5 percent during the zero interest rate policy regime, which started in 2009.

However, financial markets are separate from the economy and leveraged speculators are scared higher short-term rates will make it more difficult to service their record margin debt borrowings. Margin debt on the New York Stock Exchange has just leveled off a bit from its record high of $507 billion, but it’s still far higher than it ever was during the last two market peaks in 2007 and 2000.

However, a small market correction as well as higher long-term and short-term rates need not concern the Fed, said Paul Brodsky of Macro Allocation Inc.—regardless of whether China is dumping Treasurys or not. According to an analysis by Societe Generale, China sold more than $100 billion worth of Treasurys  in the last two weeks of August alone, leading to relatively higher yields on the 10 year bond.

No problem said Brodsky: “Were the Fed to begin hiking U.S. overnight rates this fall, the U.S. dollar would be perceived globally as holding its purchasing power value best, and would remain strong or appreciate in the foreign exchange market. Global capital held in other currencies, such as the euro, yen and renminbi, would be exchanged for U.S. dollars.”

But not only that. Making dollars scarce in global markets is precisely what caused China to panic this summer and is leading to a reverse of the global dollar carry trade flows where speculators borrowed dollars and invested them in emerging markets.

In practice, this means selling everything from Turkish stocks to copper futures and moving the money to the relative safe-haven of U.S. bank accounts, Treasurys, and also equities.

“All the usual suspects within the ‘dollar’s’ orbit have been plied to new levels of warning or devaluation,” writes Jeffrey Snider of Alhambra Investment Partners. He notes that virtually all risk proxies vulnerable to dollar scarcity have been clobbered to record lows: the ruble, the Brazilian real, and U.S. junk bonds. On the other hand, dollars are heavily bought in the interbank market in London.

And yet on another hand, gold and the Swiss franc are being accumulated, which Snider thinks is because of fear and uncertainty and shouldn’t happen under normal conditions. “It might be the beginning, finally, of the fear bid,” he wrote.

So despite some collateral damage to overvalued and over-levered U.S. markets, a Fed rate hike would improve the standing of the dollar and the United States, which has tolerated Russian and Chinese attacks on the dollar for the longest time. China and Russia have started to bypass the dollar in international trade and also launched multinational institutions like the Asian Infrastructure and Investment Bank to rival the U.S. controlled  International Monetary Fund and the World Bank.

“Against this backdrop, prognostications for Fed policy based on an economic outlook for future U.S. production, inflation, and employment is a second order consideration,” wrote Brodsky.