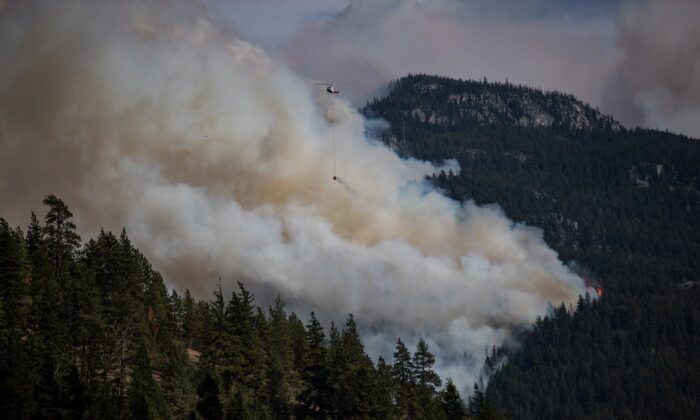 A helicopter carrying a water bucket flies past the Lytton Creek wildfire burning in the mountains near Lytton, B.C., on Aug. 15, 2021. (The Canadian Press/Darryl Dyck)
Canada

A report on the wildfire that destroyed the British Columbia village of Lytton concludes the disaster couldn’t have been stopped, even with an area-wide emergency response.

The report, published this month by the Institute for Catastrophic Loss Reduction, says scientists found the root cause was “easily ignitable structures and homes, and not just a wildfire problem.”

It says even the best possible fire response would have been “overwhelmed” because at least 20 buildings were fully engulfed within 80 minutes and would have required at least 60 fire trucks to contain.

The suggestions including mandatory mowing of tall grass and weeds around residential areas and evacuation routes, and development changes like minimum distances between buildings.

Two people were killed in the Lytton fire and most of the community was burned to the ground on June 30 last year in the middle of a heat wave that marked the hottest day ever recorded in Canada at 49.6 C in Lytton.