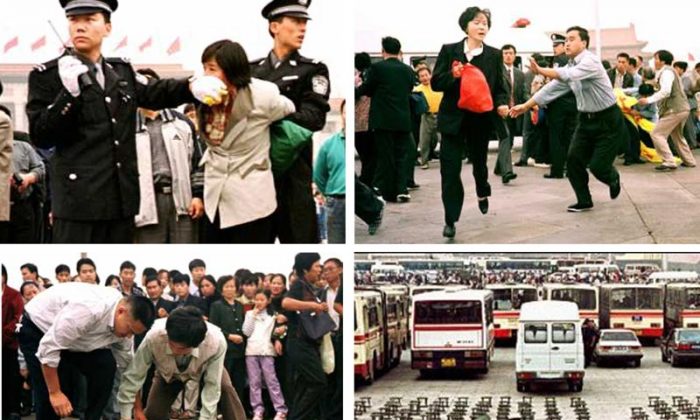 A Regime Makes War Against the Peaceful Falun Gong Practice

The Chinese Communist Party began its campaign to crush Falun Gong with an avalanche of propaganda depicting people who often meditate in parks as suicidal revolutionaries bent on destroying China.

Few Chinese believed the narrative, despite it being repeated hundreds of times. Up to 400 articles were published by each of the major newspapers within the first 30 days of the campaign.

Falun Gong was well-established, with over 28,000 practice sites across China. It was comfortably familiar to many, and public sympathy was with the group.

Jiang, who rose to power through supporting the crackdown on the student democracy movement, was both jealous and threatened by the fact that Falun Gong had attracted more adherents than the CCP had members. There were roughly 60 million Party members and up to 100 million Falun Gong practitioners.

He also wanted to wipe out the resurgence of Chinese traditional belief that Falun Gong represented, and in the persecution—which would demand that everyone in China take sides—he saw an opportunity to solidify his power.

As he said in a letter that made the case for persecution, he could not tolerate that Falun Gong adherents believed in something beyond the materialism and atheism of Chinese communism.

For three years, the security forces had harassed Falun Gong practitioners. Following the publication in the city of Tianjin, just down the road from Beijing, of an article attacking the practice, adherents gathered asking the article be withdrawn. Police arrested 45 of them, and in response to pleas for their release, told the practitioners to ask Beijing.

Ten thousand Falun Gong adherents gathered at the appeals office in Beijing on April 25, 1999. It was a crowd so large police arranged them on the sidewalks around Zhongnanhai, the communist leadership compound.

That night Jiang wrote to members of the Politburo Standing Committee that “behind the scenes” Falun Gong masterminds were making a move against the regime. He called it “the most serious incident since the political turbulence in 1989.”

Practitioners had merely gone to appeal against mistreatment, asking the central government to uphold its own laws.

Jiang wrote that Falun Gong was competing with the Party for the masses. “We must understand this issue as a political one, as one that involves the very existence of the Party and the nation. We must thoroughly investigate it and show zero tolerance!”

Jiang’s proposal to suppress Falun Gong was opposed by all other members of the Standing Committee, but April 25 had given Jiang the pretense he needed. He “unified” their opinions and pushed ahead.

What followed was a barrage of media coverage demonizing Falun Gong, in addition to an overwhelming mobilization of resources to surveil, arrest, detain, brainwash, and all too often torture and murder Falun Gong adherents.

The crackdown has been systematic, comprehensive, and brutal. Jiang created and unleashed an extrajudicial entity known as the 610 Office that was given supremacy over all other state and Party apparatuses to seek out, arrest, and “transform” Falun Gong adherents.

The resources mobilized were staggering, and the persecution of Falun Gong became so massive that the Political and Legal Affairs Committee, which runs security, outspent the military.

All parts of society were turned against practitioners, who stood to lose jobs, homes, and places in school if they did not forsake their beliefs.

The Falun Dafa Information Center estimates between 200,000 and 2 million practitioners are currently held in labor camps where they are subjected to brainwashing and torture and used as slave labor to produce goods for export.

The torture methods involved are many, varied, and shocking: High-voltage electric batons that burn the skin are used on the most sensitive parts of the body. Sexual abuse and rape is common. Massive doses of psychotropic drugs are administered. Force feeding is done with hot peppers, heavily salted gruel, and other substances. Finger tips are pierced with pins and bamboo nails. Legs are elevated and the knees pressed down with weights on “tiger benches,” causing agonizing pain. Bodies are suspended, hung up by the arms. A simple list of all the tortures used would easily fill a page.

Days and weeks of such torture leaves victims maimed or dead. The Information Center can confirm that over 3,500 practitioners have died from torture and abuse, but the actual number is believed to be several times that.

The goal of the abuse is to break the will of adherents, and force them to renounce the practice. The Communist Party calls this terrifying process “transformation.”

Those “transformed” describe wrenching shame and guilt from the betrayal of their conscience. James Ouyang is one Falun Gong practitioner who told his story.

Brainwashing, beatings, and torture with electric batons broke his will. After six days of continuous torture, be gave in to the guards’ demands and spent three days denouncing Falun Gong. Even then, guards shocked him, causing him to soil himself. When they believed his transformation was “sincere,” he was brought before a group of Falun Gong inmates to reject the practice one more time as cameras rolled.

From there, he was taken to 20 days of final brainwashing classes. After debating Falun Gong 16 hours a day, he “graduated.”

“The pressure on me was and is incredible,” he said in an interview with the Washington Post. “In the past two years, I have seen the worst of what man can do.”