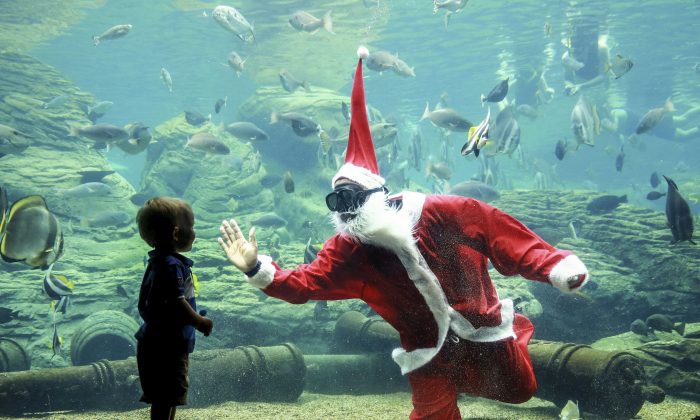 A Professor’s Message for the Holidays: Time to Celebrate!

It’s time to put aside our troubles and celebrate.

At Christmas, your creditors, competitors, and even the neighbor who complains about your son’s electric guitar offers a smile and wishes you well.

Even Donald Trump will quietly acknowledge Hillary Clinton as a cheery, charitable and clever woman. Well, that may be hoping for a bit too much.

But this is the season where we manage to reach into our reservoirs of charity and optimism to proclaim that in the new year we will find peace with our adversaries, lose those extra pounds, and finally live within our means.

We embrace hope, in part, because we remain so powerfully challenged.

Coping with terrorism, solving environmental problems threatening the planet, and managing the economy to accomplish a just prosperity are tough tasks even for gifted minds like those of Barack Obama and Angela Merkel. But since biblical times tribal enmities, human excess and poverty have bedeviled our golden vision for humanity.

Still, we live at the cusp of a new and better age.

It’s all before us, if we can finally embrace our nobler instincts and see the grand potential of our Creator’s most precious gift, the human mind.

Believe what you will about climate change—the Earth is getting decidedly warmer, the ice caps are melting, and the consequences for civilization could be devastating. Quarreling nations must do their part or significant portions of the planet will become virtually uninhabitable and many fewer humans could be walking around 100 years from now.

Believe what you like about the recent Paris Climate Conference—I think President Obama promised too much from America and got too little from China and others in return—virtually every nation in the world managed to put aside their differences and pledge some contribution toward accomplishing an epic transformation to a less carbon-dependent civilization.

Accomplishing this agreement, no matter how imperfect, is something to celebrate. The last time humanity forged such common purpose was at the point of a Roman sword.

In that new civilization, human beings will be freed from the debilitating burdens thrust upon Adam and Eve when they were cast from Eden. We will no longer need toil in the fields or dark and dangerous factories.

Technology is not just about emails, selfies, and skyping your daughter working in Australia. Over the next two or three decades it will become possible to assign virtually all the mindless, backbreaking, and dangerous tasks to robots that don’t use a whole lot of energy, or at least energy that soils the atmosphere.

Heretofore technologically intractable tasks such as picking lettuce, framing a building, or mounting a crown to repair a tooth will be wholly taken up by machines equipped with remarkable dexterity and artificial intelligence.

By the end of this century, the technology of the first Star Wars movie will seem as from the Stone Age and scholars will wonder how 20th century futurists lacked so much imagination about the potential of science.

The real challenge if we don’t manage to destroy ourselves through war, greed, and denial of the imperative for environmental stewardship will finally become equipping each human being with the means to engage in intellectually demanding and creative work and to share in the bounty.

How Charles Dickens Redeemed the Spirit of Christmas

Access to technology and energy are already remarkably cheap, and globalization is making their benefits ubiquitous. Bold commercial innovations are emerging from even the poor countries of Africa. By this century’s end, continued progress could put much of economics—the study of scarcity—out of business.

Measuring and boosting GDP will no longer be the logic of progress.

That’s this professor’s message for Christmas and the new year. It’s all before us, if we can finally embrace our nobler instincts and see the grand potential of our Creator’s most precious gift, the human mind.