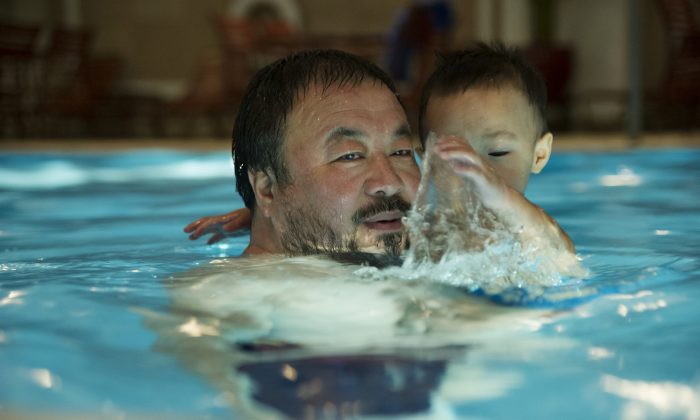 A Portrait of the Artist Under House Arrest

It is the product of 81 days of solitary confinement and rough interrogation. Recreating scenes from his ordeal, “S.A.C.R.E.D.” is already recognized as one of Ai Weiwei’s masterworks, as well as a devastating critique of the Communist Party’s police state tactics.

At least the government did its best to prevent any distractions from delaying its completion—by confiscating his passport and placing him under house arrest. The artist’s difficult year spent as a prisoner in his own home-studio (known as 258 FAKE) is documented in Andreas Johnsen’s “Ai Weiwei: The Fake Case.”

Ai Weiwei is one of the most important artists in the world today, as his famous sunflower seed installation at the Tate Modern and the current retrospective at the Brooklyn Museum well attest.

However, Ai claims he never initially set out to be a political artist, but was forced down that path by the government’s reaction to his work and activism. Those who have seen Alison Klayman’s “Ai Weiwei: Never Sorry” or Ai’s own films, particularly “Disturbing the Peace” and “So Sorry,” know the artist as a compulsively outspoken, larger than life figure.

It is rather shocking to see the nearly (but not completely) broken Ai Weiwei who emerges from almost three months of illegal detention early in “Fake.”

As a condition of his so-called parole, Ai Weiwei is forbidden to speak with the media, particularly international reporters. He duly complies, at least for a while. Suffering from memory gaps and nightmares, Ai is a pale shadow of his former self. Yet, as his health returns, that familiar spirit also perks up.

Once again, the Communist government provides an inadvertent assist, by requiring Ai to post a considerable bail during his appeal. Much to the artist’s stunned amazement, there is a massive outpouring of support on his behalf, as 100-yuan note paper airplanes start sailing over his wall, at no small risk to the donors. Their heartfelt messages move him deeply.

Essentially, “Fake” picks up where Klayman’s documentary left off, making them excellent companion films. Of course, it is hard to go wrong with any film that captures Ai Weiwei being himself.

Although we might expect Ai to be far more guarded on camera following his incarceration, the opposite appears to be true. Not only do hear him talking candidly about the lasting effects of his imprisonment, we also witness (quite touching) scenes of him interacting with his young son, Ai Lao.

Arguably, we see more of Ai the private citizen than Ai Weiwei the public figure. Of course, that rather makes sense, considering he could not leave his home without government permission. Nevertheless, the injustice of his persecution is clearly and thoroughly established.

Largely observational in his approach, Johnsen’s trust in his subject’s cinematic presence and compelling work (be it artistic, political, or both) pays off handsomely. A source of inspiration and outrage, “Ai Weiwei: The Fake Case” is highly recommended for all viewers who value free expression when it opens Friday, May 16 at the IFC Center.