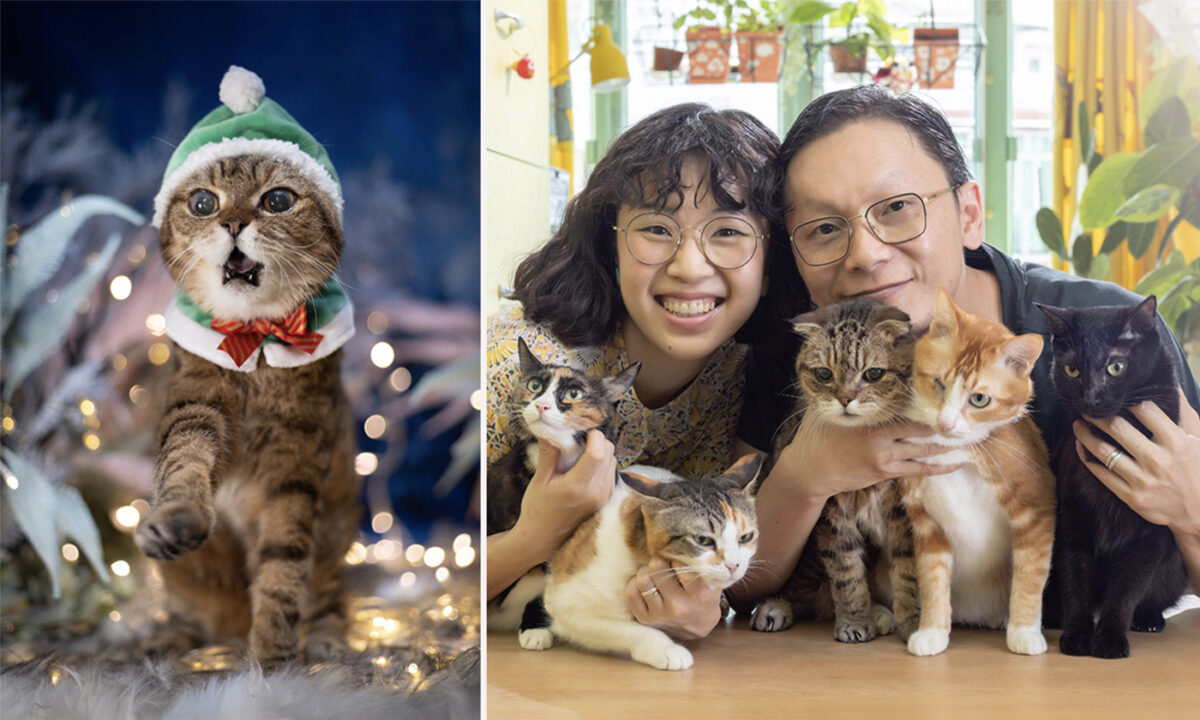 Wilson Ng (Right) was a senior photojournalist at the now closed Apple Daily. In 2021 he became a "cat-ographer," photographing domestic cats and their owners in their homes. (Courtesy of Wilson Ng)
Hongkongers' Story

A Photographer’s Life With Cats

Wilson Ng, once a long-time and loyal senior photojournalist who contributed to Apple Daily for 23 years, suddenly lost his favorite job. He was one of the hundreds of staff members who became unemployed when the business was shuttered last year.

Wilson has owned cats for over 30 years, and says he still remember splaying hide and seek with friendly felines as a child.

Wilson would hide under the bed with his cats, and watch the world go by from their perspective. He was fascinated by the feline world and could stay entertained for hours.

Wilson was mesmerized by the Louis Wain-like world he had made for himself as a child. Wain is an artist who drew pictures of anthropomorphized cats.

As a photojournalist, Wilson was required to be observant down to the last detail, a skill that helped with capturing the personalities of cats. Wilson is one of the lucky ones with a career he loves.

“Being a cat photographer will be perfect for him,” said Doris.

Doris knew Wilson well and that he would enjoy the new path that she had suggested. Wilson embraced his new adventure as a cat photographer. Together the couple founded Fei Pei Photography and they go to people’s homes and take pictures of their cats.

The Challenge of Capturing a Cats in a Photo

Unlike dogs, who are generally friendly, you must earn a cat’s trust.

Most cats lurk in the corners and observe before they approach a stranger. They need to know that “you are trustworthy.” As Louis Wain once said, “Intelligence of the cat is underrated.”

When Wilson arrives at a client’s home, he takes along a large suitcase containing about 65 pounds of photography equipment. He will tiptoe in with his giant suitcase so he doesn’t startle the feline in its territory.

Like a birdwatcher, Wilson sits on the side, waiting patiently, and observing quietly, to allow skittish kitties to adapt to his presence in their home. He allows a lot of time to ensure each cat has the most comfortable and natural photo shooting environment.

Once the animal feels secure, it will come out in the open and be its best self again. That is Wilson’s cue to grab his camera. He says that the best way to capture a cat in a still pose is for it not to realize someone is taking its photo.

“It is not often that domesticated cats are suitable or fond of going outside. Most domestic cats are pretty anxious when outdoors, which can affect their health.”

“Some customers have previously taken their cats to a studio for a photography session. But they noticed that their cats would often look frozen in the photos. Some of them even got sick.” Doris said some of the cats got ill because of the anxiety and nervousness of being in a new place.

“It is completely different between shooting pictures of a cat and a dog. Dogs tend to be more friendly and trusting with humans. But if you take a cat to a strange environment, especially in a studio with lots of noise and people, trying to get it to play or interact is challenging. Cats will feel anxiety,” Doris said.

If you have had a cat, you will know the panic cats feel when you try to put them in a carrier and take them to a vet. Wilson understands this panic.

Wilson had to take his cat to see a vet. He put the cat in a carrier without a protective cover and quickly hopped into a cab. On the way to the vet his cat suffered a heart attack due to overwhelming panic and anxiety. His cat died because of the stress it felt.

Since that unfortunate incident, Wilson deeply understands that humans cannot choose their preferences or treat the animal world subjectively. “We should become familiar with their habitual living, especially when taking a domesticated cat outdoors,” he explained.

Raising cats has taught Wilson a lot. Each cat shows him different aspects of their unique animal kingdom so he can take better care of his next animal companion. Because of the couple’s understanding of felines, home photography became one of the features of Fei Pei Photography.

Doris shared that it is pivotal to ensure every cat is relaxed and comfortable, and seeing them in their own home is the only place that does not have a time limit.

Cats’ Comfort and Happiness are the Goal

Taking cat photos requires great patience. Wilson says this is his dream job, as it suits his personality, and that taking pictures of animals can be therapeutic. Wilson is willing to wait patiently so he can grasp a cat’s personality and character. Because he has cats of his own, he is comfortable with taking time to get to know other cats.

Wilson insists on taking only one job a day so he can allow time for each cat to adjust and relax around him. This also takes away the pressure of rushing and allows him to capture each cat’s natural and relaxed self.

When Wilson and Doris were still dating, their common interest was cats. They each had cats of their own. Their perfect date they said they would be to go to each other’s home, set up unique scenes, and turn the place into a photo studio. They played with the cats while capturing them on camera. Having fun with their cats was how they used their leisure time on their days off.

Currently, the Ng’s have seven cats.

A Granny and Her Senior Cat

One of Wilson’s bookings was of a grandma and her senior cat Miu Miu who was always glued to the woman’s side. The granddaughter wanted her grandma to have something to remember her time with Miu Miu, as the cat was already 18 years old.

During the photo shoot, Wilson could see how dedicated Grandma was to Miu Miu; she would sit on the floor to play with her beloved cat despite her own fragility. Wilson, at one point, was concerned that Grandma would hurt herself by moving too much.

Wilson noticed the incredible love and bond between Grandma and Miu Miu. Even though sometimes Grandma might be a little rough when petting Miu Miu due to a loss of sensation in her hands from old age, Wilson never saw Miu Miu complain.

During their chat, Grandma told the couple that she would get up in the middle of the night to check on Miu Miu in the winter and change her hot water bottle. “Winter nights are cold and chilly. Grandma thought that Miu Miu might be cold during the night too. So she changed her hot water bottle to ensure Miu Miu stayed warm all night. That act of caring and kindness alone touched us deeply.”

Another touching story was about a 17-year-old cat, Eve, and a granny. Both Granny and Eve had heart disease. When Granny ended up in the hospital after a stroke in 2019, Eve would stand by the door, waiting for Granny to return home. When Eve was ill and had to stay in the cat hospital, Granny would lose sleep and shed tears, worrying that her beloved cat would not return to her.

During the photo shoot, Granny jokingly told Eve, “Vet bills are so expensive, unlike mine. Maybe you should come with me to my doctor. We both have heart diseases, so our medication should be about the same.”

When Granny traveled to Taiwan, she wrote her to wish on her sky lantern: “Eve being healthy.” Sky lanterns are lit and released to commemorate the end of the Chinese New Year.

Unfortunately, not long after the photo shoot, Eve passed away. The family was very grateful to have the lovely photos to remember her by.

How Cats Can Save a Life

Doris, like Wilson, also worked at the former Apple Daily. She initiated a supplementary pet magazine for the news outlet.

Fei Pei Photography became the couple’s bread and butter. They combine imagery and words to document each pet owner’s story. One unique life-sharing tale was from a customer who suffered from depression.

One day the owner was having a difficult time and wanted to harm herself. Sensing something was wrong, the cat ran over and as meowed as loudly as possible as if the cat was trying to warn the owner not to leave it alone or hurt herself.

The owner suddenly woke from her deep dark thoughts and returned to the cat, which had saved her life.

The lifesaving cat is now 21 years old. Most people usually would not want to tell people about their dark past. But the owner feels differently. Wilson and Doris thought it was a sensitive and personal story they should not share. But the cat owner said they could.

“It is a very heartwarming story,” Wilson said. After people hear the story, they say they are overwhelmed by the unspoken compassion between a cat and a human because they can feel the connection.

One afternoon, a client called and asked if Wilson could come over that evening instead of the following day.

It turned out that Logan, the nine-year-old cat, was suffering from the final stage of kidney disease. It was hyperventilating and breathing shallowly. Logan’s owners were worried that the cat wouldn’t make it to the morning.

Although Wilson was exhausted from a day’s work, being a cat lover, he knew he and his wife had to be there for Logan.

It is fantastic how perseverant animals can be; when a cat suffers from kidney disease, its appetite decreases. But Logan was different. Logan was a cat full of life and would follow a trail of Party Cat Mix and gobble it up.

Wilson managed to capture the best of Logan as if he was an Olympic champion. You could not tell the cat was sick at all.

“Cats are amazing creatures. They enjoy and live their best until the end.” Wilson said Logan passed a few days after the shoot. The family said that the photos he captured of Logan warmed everyone’s heart.

It is incredible how much love humans can give to a pet and vice versa.

A Life Lesson from Cats

Looking back at the past 18 months and their professional transformation, Doris said she is thankful they became cat photographers.

“It is unbelievable sometimes to see two lives of different species that speak different languages but love each other’s company so profoundly. As photographers, we are here to document those living moments as one unit, a family. It might seem cheesy, but cats do know how to communicate, even though they are not as evolved as we are.”

One cannot disagree that cats are good companions and Doris and Wilson certainly feel sparks of feline love through the camera lens.