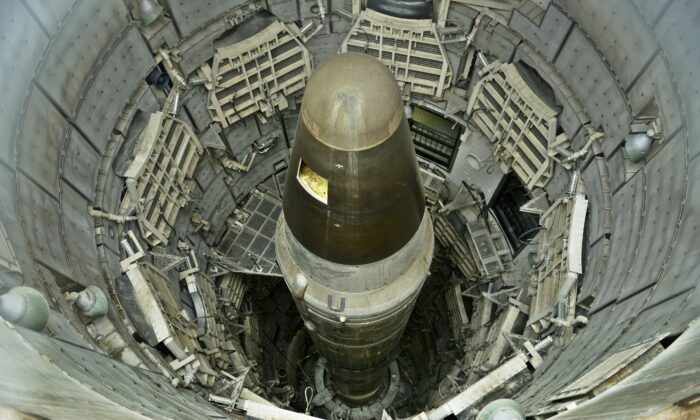 Example of a missile silo: a deactivated Titan II nuclear ICBM is seen in a silo at the Titan Missile Museum in Green Valley, Ariz., on May 12, 2015. (Brendan Smialowski/AFP via Getty Images)
Thinking About China

A Nuclear Posture Review for a Two-Front War

The Nuclear Posture Review (NPR) is an important document to guide the Department of Defense regarding its nuclear forces and, thus, the nuclear deterrence capability of the United States.

The last one was released in early 2018, and the new one will be this year. Much has changed in the previous four years. The United States now faces nuclear threats from the Chinese regime.

China has greatly expanded its nuclear arsenal and strategic delivery systems since the 2018 NPR, leading Adm. Charles Richard, the commander of U.S. Strategic Command, to identify it as a “strategic breakout,” most recently in testimony in early March before the Senate Armed Services Committee.

The United States also faces nuclear threats from Russia—which has an even larger and more modern arsenal. Moreover, given the Sino-Russian entente, the United States must plan for a two-front nuclear confrontation. This is something for which Washington has not planned since the Cold War.

The 2022 NPR must build upon the 2018 version to meet the most formidable threat to U.S. security in a generation. But it must be even bolder than the earlier document.

The 2018 NPR called for modernization of the triad and the development of a new low-yield warhead and new delivery systems to address shortfalls in existing deterrent capabilities. It proposed that a present capability, dual-capable aircraft, to deliver low-yield nuclear weapons be augmented by developing a low-yield ballistic missile—using existing D-5s to carry a modified, lower-yield W76-2 nuclear warhead, and a new Long-Range Standoff missile, to be added in the 2030 timeframe.

These capabilities are sought to address current limitations in the U.S. non-strategic force posture in the face of potential Russian aggression against NATO, its war in Ukraine, and entente with China.

An Abundance of Threats

While 2018 NPR was concerned about Moscow due to its seizure of Crimea, aggression against Ukraine, and bellicose declarations and statements directed against NATO, the 2022 NPR must deter a Russia willing to invade its neighbors by waging high-intensity conventional war.

Proven aggression against the states of the former Soviet empire is not the only concern. Russian capabilities and doctrine are also worrisome. Specifically, the number of Russia’s non-strategic nuclear weapons, the deployment of new tactical ballistic missiles, a nuclear doctrine regarding the use of those forces, including first use and “escalation to de-escalate,” and conventional and dual-use Russian anti-access/area denial (A2/AD) capabilities, especially near the Baltic states and Poland from metropole Russia and the Kaliningrad Oblast.

The significant growth in the Russian low-yield arsenal, delivery systems, military exercises, and doctrine suggests that Russia places considerable weight on nuclear weapons to achieve its military and political objectives and, therefore, logically would have a doctrine devoted to their use.

The Russians have probably detected a seam in NATO’s deterrent that may permit Moscow to aggress against NATO members, perhaps one or more of the Baltic states, through hybrid warfare or direct attack with an expectation that superiority in low-yield systems would allow them to change the status quo without causing a larger conflict.

The 2022 NPR must call for greatly expanded low yield and strategic weapons with a dynamic and bold nuclear infrastructure in anticipating and checking the current Chinese and Russian nuclear arsenals and the future ones.

The Value of Low-Yield Nuclear Capabilities

The low-yield capabilities identified by the 2018, and likely the 2022 NPRs, are needed more than ever by the United States as it confronts China and Russia for six reasons.

Denial capabilities—typically, conventional ground, sea, and tactical air forces—deter chiefly by their effect on the aggressor’s calculus. They adversely influence the enemy’s estimate of the probability of gaining the objective. Any conventional attack would be met with non-strategic nuclear forces to blunt the attack and thus deny the attacker its military objective.

Due to their physical effects, non-strategic nuclear weapons are seen as exceptional deterrence by denial weapons. They were used in that capacity by the United States and the Soviet Union during the Cold War, and this rationale remains.

Naturally, another aspect of deterrence is keeping the enemy from using its weapons, whether conventional or nuclear. Accordingly, the second political and military role of non-strategic nuclear weapons is that they serve to deter their use by opponents. But to do so is challenging—U.S. non-strategic weapons must be present in sufficient numbers and on survivable platforms.

Third, should deterrence fail, non-strategic nuclear weapons are perceived as the most “useable” of nuclear weapons due to their low yield, which would augment conventional forces in stopping an attack on land, at sea, in the air, or destroying targets too hardened or too deep for conventional weapons. Their low yield would also permit limited escalation against a higher-level target set, such as Russian leadership targets, to compel termination.

Fourth, non-strategic nuclear weapons served an important doctrinal role for NATO armies today, as they did in the Cold War. They bridge the nuclear-conventional interface, maintaining linkage up the ladder of escalation. Were a conventional attack to occur, NATO would want the capabilities to use non-strategic nuclear weapons to defeat it, should conventional weapons fail to do so. This mission overlaps to some degree with deterrence by denial since NATO would want to deter such an attack in the first instance.

The first is major European and Indo-Pacific states are linked together by hosting the weapons, by the possibility of their use, and through nuclear planning within NATO. Thus, there is shared responsibility and risk, which in turn signals a commitment to the alliance.

The second is the United States is coupled with its NATO allies by virtue of their deployment to Europe and the United States’ commitment to their use should deterrence fail, and if the foe is unable to be stopped at a lower level of conflict. Born of the Cold War, the political role of non-strategic nuclear weapons for the NATO alliance remains important.

Sixth, non-strategic nuclear weapons will also have a role in strengthening the ability of the United States to coerce its opponents, should that be necessary. This capability is particularly important concerning China.

Over many years now, China has acted against U.S. interests and indicated that it is not a status quo power but seeks to overthrow the United States as the dominant state in global politics. Its expansion in the South China Sea has gone unchecked, and this has had profound and alarming effects on U.S. interests, its allies, and other states in the region.

It is now necessary to use U.S. power to compel communist China to change its posture. U.S. tactical capabilities are insufficient to meet immediate requirements against China and Russia. Thus, the small number of non-strategic weapons in the U.S. arsenal must be expanded.

The Need for Modern Strategic Systems, NC3, Nuclear Infrastructure, but Most Importantly a Renaissance in the Role of Nuclear Weapons for US Security

The 2022 NPR is likely to strongly support the continued modernization of the triad, including the B-21 Raider, Columbia class SSBNs, and ground-based strategic deterrent (GBSD), as well as the continued modernization of the U.S. NC3 (Nuclear Command, Control, and Communication), including through “NC3 Next” and advanced technologies to aid the multiple NC3 missions.

The nuclear infrastructure has improved but lags behind one of its significant commitments to produce 80 nuclear weapons pits a year by 2030.

The greatest contribution the NPR could make is to call for a renaissance in the role of nuclear weapons for U.S. security. To confront the Sino-Russian entente, the United States must greatly expand its triad, its stockpile of non-strategic weapons, modernize NC3, and possess an infrastructure that can design, produce, and test at least one order of magnitude more warheads than are now planned.

That requires that American society—from our universities, industry, Big Tech, and Main Street—once again supports the role that nuclear weapons play in U.S. security and the security of U.S. allies and partners. Society cannot offer that support unless it is explained to the American people that the Sino-Russian entente is a direct threat to U.S. national security, and why nuclear capabilities allow Washington to deter aggression while maintaining U.S. national security and its global commitments.

The roles of strategic and non-strategic nuclear weapons are many, and the United States needs to possess an arsenal suitable to the reality of contemporary international politics where both Russia and China are hostile to its interests.

The 2022 NPR will be the most important ever produced because the threats faced by the United States are the greatest since the demise of the Soviet Union. Therefore, the 2022 NPR must boldly embrace the nuclear mission as the United States did in the Cold War when it had to meet multiple, simultaneous global threats presented by the Warsaw Pact and China.

The United States has lived off of its nuclear capital for over 30 years. That time is over. Nuclear capabilities and infrastructure, for too long an afterthought, must now once again be foremost in U.S. strategic thought.