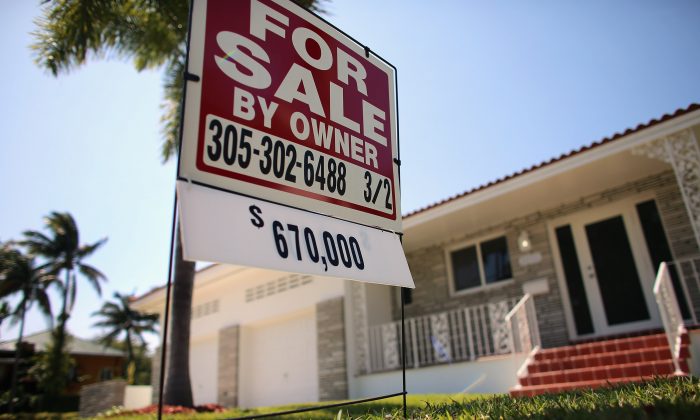 A “FOR SALE” sign stands in front of a home in Miami, Fla., March 26. Home prices have been on the rise, but it looks like another bubble is forming. (Joe Raedle/Getty Images)
Business & Economy

The S&P/Case-Shiller composite home price index increased by 9.3 percent for the year ending February 2013, according to data released April 30. It is the biggest 12-month rise since May 2006.

It is a welcoming sign for homeowners, but also confirms the fear that another housing bubble is forming in many parts of the country.

Housing prices have been on an unmitigated rise since mid-2012, helped by a loose monetary policy by the Federal Reserve and a chase for yields prompting some Wall Street banks and hedge funds to snap up properties in previously distressed markets.

By all accounts, the real estate market has been hot. According to release issued by the U.S. Census Bureau last week, sales of new homes last month came in at 18.5 percent above March 2012 figures. The median sales price of new homes nationally was $247,000, a 3 percent increase from the same month in 2012.

Price Inflation Not Driven by Economics

“Despite some recent mixed economic reports for March, housing continues to be one of the brighter spots in the economy,” David Blitzer, chairman of the index committee at S&P, said in the report released by Dow Jones Tuesday.

The first part of Blitzer’s quote is telling—“despite some recent mixed economic reports”—and confirms perceptions that underlying economic fundamentals do not warrant such rises in home prices.

Data from the Federal Housing Finance Agency (FHFA) corroborates that economics aren’t driving recent home price movements. As of February 2013, the FHFA showed that sales of new and existing homes increased by 9 percent and 15 percent from February 2012, respectively.

But those figures aren’t consistent with consumer incomes, which have been stagnant over the last year. A more realistic view is that recent gains in housing are inflated by the Federal Reserve’s quantitative easing (QE) measures, which have kept interest rates at artificially low levels. Such low interest rates have enabled more consumers than normal to take out new loans and refinance existing loans.

A byproduct of QE is that the Fed has become the world’s biggest buyer of mortgage-backed securities, containing loans that are largely guaranteed by the government mortgage finance firms Fannie Mae, Freddie Mac, and Government National Mortgage Association (Ginnie Mae).

The recent housing recovery feels “eerily familiar to the previous government policy-induced boom that went bust in 2006, and from which the country is still struggling to recover,” Edward Pinto, former chief credit officer at Fannie Mae, wrote in a Wall Street Journal op-ed recently.

Why is the Fed doing this? The federal government has gone to extreme lengths to “stimulate” the economy by increasing loan origination and related activities and increasing revenues for large banks. It is a bet that more purchases, more borrowings, and more spending will jump-start the economic growth engine. So far, the effect of that has been questionable, resulting in stock market gains but little increase in real incomes for most consumers. What is certain is that the measures have helped to create a new housing bubble.

Over the last year, large hedge funds, private-equity firms, and Wall Street banks have gobbled up foreclosed properties in many of the areas hardest-hit during the recession, such as California and Florida.

Within the industry, the tactic is called “REO-to-rental.” REO stands for real estate-owned. It involves purchasing large blocks of homes at distressed prices, turn them into rentals, and then resell them at a later time when the real estate market appreciates.

Many of the purchases are made at public auctions and short sales by banks. Investors who capitalize the funds are promised 6 to 10 percent return on investment from rental income cash flows. Last year, private equity firm The Blackstone Group closed on $1 billion worth of real estate around Tampa, Fla. Blackstone has created an entity called Invitation Homes specifically to purchase and refurbish distressed real estate.

This strategy has caught on at numerous funds, and the high volumes of such purchases have already served to drive up prices enough for some funds to exit. Hedge fund group Och-Ziff Capital Management late last year pulled out of the REO-to-rental market, citing lower-than-expected returns.

While on the whole, Redfin doesn’t feel that a new bubble is a concern nationally; several markets are overheating. Washington, Los Angeles, San Diego, and San Francisco have seen their housing prices increase by more than double-digits above historic norms.

“Those areas are vulnerable because prices are rising (at a rate that’s getting) ahead of incomes,” Redfin Chief Executive Glenn Kelman said in a recent Chicago Tribune interview. “And mortgage interest rates are going to rise, which will chill the market—the Mortgage Bankers Association is predicting average 30-year rates will rise to 4.5 percent by this time next year.”