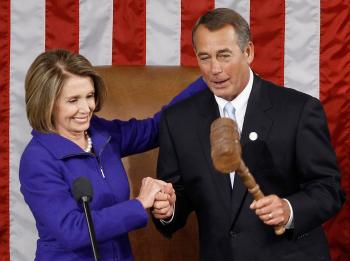 A New Chapter for House Republicans

By Andrea Hayley
Print
WASHINGTON—It was a day for House Republicans to relish: the first day of the 112th Congress, with a sizable majority and control over the legislative agenda, the celebration of their popular new speaker, and an opportunity to change the rules with debate, and a vote on their long-heralded procedural reform package.

Over 400 members of the House attended, with family members in the gallery, children and grandchildren sitting on legislator’s laps, and friends and colleagues happy to congratulate each other on the beginning of a new chapter.

John Boehner (R-Ohio), nominated and elected Speaker of the House, was joined by his wife and two daughters, as well as 10 of his 11 brothers and sisters.

On entering the chamber during the initial gathering of the quorum, it was clear that Boehner was the man of the day—an overwhelming number of his colleagues wanted to shake hands and have pictures taken with him. Boehner maintained his usual calm, and humble composure, wiping his eyes a few times, but not succumbing to emotion as he has in the past.

Jeb Hensarling, chairman of the Republican Conference, said of Boehner during his official offer for the nomination, “This proud son of Ohio has waited tables, mopped floors, tended bar, worked construction, worked his way to a college degree at night school, led a thriving company, and through his faith, his hard work and his values, is now poised to become the next speaker of the House of Representatives.”

The speech resulted in cheers, and a long and sustained standing ovation for Boehner.

In sharp contrast, and reflecting the loss of power sustained by Democrats during the midterm elections, outgoing speaker Nancy Pelosi’s nomination for minority leader was met with a show of support noticeably more reserved.

Pelosi’s nomination was also clouded by the opposition of Blue Dog Democrats, those who suffered the greatest election losses and were punished by conservative voters for unpopular policies passed during Pelosi’s leadership.

The final election count was 241 for Boehner, 173 for Pelosi, and 19 “other” votes, most notably—11 votes for Heath Shuler (D-N.C.), the man who led the opposition to Pelosi’s nomination as minority leader. In total, 19 Democrats withheld votes from the former first female speaker of the House.

In the past few days, Pelosi has made herself available frequently to the press, being sure to get her party’s message across, delivering remarks at a Congressional Black Caucus swearing-in ceremony earlier in the day, and holding a House Democratic leadership press conference on Tuesday.

She has emphasized that Democrats, under her leadership, will focus on job creation, strengthening the middle class, and reducing the deficit. She reiterated that message on the House floor during a speech in which she officially passed over the gavel and control to Boehner.

“When the new majority comes forward with solutions that address these American challenges you will find us a willing partner,” she offered.

“We must stand willing to finding common ground, to solve problems and ensure a better American future for all Americans,” she said.