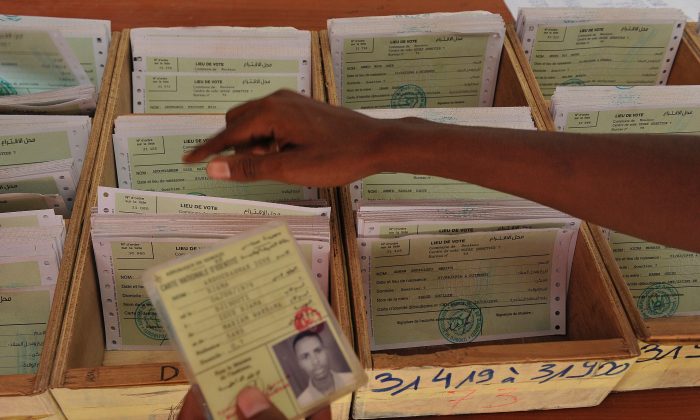 A Djiboutian electoral agent searching for a voters card at a polling station in Djibouti on March 22, 2016. Elections in Djibouti are scheduled to be held in April 2016. Current President Ismail Omar Guelleh, who has been in office since May 8, 1999, is up for re-election. (Simon Maina/AFP/Getty Images)
Africa

Africa is coming off a long run of elections and referendums that embody the good, the bad, and the ugly of the continent’s democracies. In two elections, opposition candidates were either temporarily imprisoned or repeatedly arrested. In two others, electronic media blackouts prevented protests after contentious results began to seem likely. In one, a well-connected, well-educated candidate lost and conceded with grace; elsewhere, results were neither gracefully received nor gracefully won.

The most headline-grabbing election was in Uganda, where President Museveni was (yet again) re-elected and perennial opposition candidate Kizza Besigye (yet again) defeated. While Besigye had more freedom to campaign than in previous elections, he was still arrested three times and basically saw out the election under house arrest.

Still, he did better than Niger’s opposition leader, Hama Amadou, who contested the first round of the presidential election from prison and the second round from hospital in France. President Mahamadou Issoufou proceeded to win the second round by a landslide.

Meanwhile, Congo-Brazzaville’s Sassou Nuguesso, who’s been president with one brief interruption for a total of 32 years, won a third term of five years in his current extended tenure in power. Like Uganda’s, this was essentially an orchestrated election held to burnish a dubious leader’s veneer of democratic validation—a veneer that’s lately been wearing thin.

The great exception to these dismal exercises was the election in Benin, where Prime Minister Zinsou seemed at one point a sure bet to win the presidency. More French than the French, highly educated in the French system, a friend of power-brokers including former French Prime Minister Laurent Fabius, and a modernizing technocrat, he promised much. Yet he was roundly defeated by Patrice Talon, an equally technocratic business leader with an offhand manner.

Some French newspapers speculated that perhaps Zinsou lost support because he is half white, but it was probably because he seemed like a parachute candidate dropped from the sky by French interests. The Beninese probably wanted someone who appeared more fully the candidate of Benin.

Besides these elections, there were efforts to overhaul difficult governments via referendums. An opposition campaign in Kenya made a strong showing in its effort to call a constitutional referendum on various matters, but it failed because many of the requied 1 million signatures it had gathered to trigger a vote were irregular.

But there was a real referendum of note in Senegal, one prompted by the president himself. Approved with 63 percent of the vote, it reduced presidential terms from seven years to five, limited presidential tenure to two terms, and made it illegal for people to stand for the presidency if they are over 75. That would do a lot to bring down the average age of African presidents. Uganda’s Museveni is now 71, and Nuguesso is now 72; South Africa’s beleaguered Jacob Zuma is 73, Mauritius’s Anerood Jugnauth is 86, and Robert Mugabe is still going (just) at 92.

Most importantly, perhaps, the referendum proposed to recognize the office of the leader of the opposition in constitutional terms, and to grant him or her official benefits. That would mean an end to the sort of treatment meted out to Besigye and Amadou.

Whether such constitutionally accorded limits and respect will be adopted elsewhere remains to be seen. It would certainly do more to accord a measure of respect to African elections, many of which are currently mere performances—and some of which are nothing short of travesties.