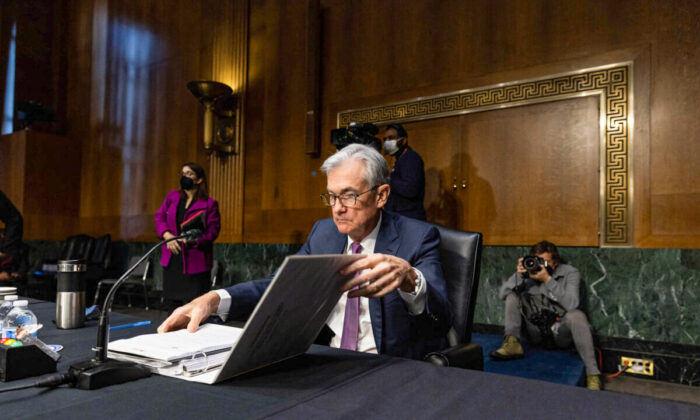 Jerome H. Powell, Chair of the Board of Governors of the Federal Reserve, prepares to leave at the end of a confirmation hearing before the Senate Banking, Housing and Urban Affairs Committee in Washington, on Jan. 11, 2022. (Graeme Jennings-Pool/Getty Images)
Business Columnists

These deep thinkers of Congress continued, “Under his leadership the Federal Reserve has taken very little action to mitigate the risk climate change poses to our financial system.”

The congresspersons’ comments were duly noted (I guess) and Jerome Powell was reappointed to another term as chairman of the Fed.

But now, under cover of a metaphorical night, they may be getting their wish.

A Lotta People Can Do Damage

The president recently nominated Sarah Bloom Raskin for the position as the Fed’s vice chair for bank supervision. Not a high-profile position, but a highly influential one to be sure. Raskin would be Team Ocasio-Cortez’s dream plan-B pick.  She’s bringing all the right attitude to the job.

For one, she doesn’t like the fossil fuel industry. In an op-ed in May 2020 she criticized the Fed for allowing the industry to participate in the initial $2.2 trillion relief package. She wrote (emphasis mine): “The decision to bring oil and gas into the Fed’s investment portfolio not only misdirects limited recovery resources but also sends a false price signal to investors about where capital needs to be allocated.”

That was kind of funny. At what point does she consider the eight or so trillion dollars the Fed and Congress pumped into the economy to be limited recovery resources?

But it’s also terrible because it highlights a huge bias on her part. That government and other agencies (like the Fed) should be picking winners and losers. That they should be using their power to shape the evolution of our economy from the top of their ivory towers down.

In an op-ed last September, she painted this delightfully apocalyptic picture of the future: “As this year’s brutal summer showed, it has become increasingly easy to track the consequences of climate change. Just as extreme weather is claiming more and more human lives, more and more species are being lost to extinction. Entire communities have been displaced by savage storms and intolerable temperatures, and rising sea levels and unstable agricultural production threaten to destroy millions of jobs.”

Naturally, she called on government agencies who don’t have a specific mandate to solve the problem: “But even though the United States lacks a single monolithic financial regulator, the complexity of its regulatory apparatus need not imply climate inaction. While none of its regulatory agencies was specifically designed to mitigate the risks of climate-related events, each has a mandate broad enough to encompass these risks within the scope of the instruments already given to it by Congress. Accordingly, all U.S. regulators can—and should—be looking at their existing powers and considering how they might be brought to bear on efforts to mitigate climate risk.”

To bolster her argument, she noted regulators’ tendency to act after a crisis has taken place. She cited the housing bubble of 2007 as proof.

There’s a huge difference between regulators not regulating bad behavior and regulators plotting a course for the economy that’s based on questionable science.

This kind of thinking is a free market economy’s worst nightmare.

Not that we live in a free-market economy—but it is a reasonable facsimile. And we should keep it that way as much as possible.

It’s bad enough that Congress and the Fed have flooded our economy with fiat money and helped spark a round of roaring inflation. But the idea that government agencies, populated with career bureaucrats, could actually direct the evolution of a $25 trillion economy is just absurd. That’s the market’s job.

Right now her confirmation rests in the hands of the U.S. Senate. Should she be approved, it would largely add another layer of uncertainty to what is already a jittery market. And in uncertain times, markets catering to basic human needs are often your best bet. Oil’s not going anywhere but up, and that means funds like the Energy Select Sector SPDR Fund (XLE) should continue to do well. Commodity prices should follow so I’d look for any one of the Elements Rogers International Commodity Indexes to perform as well.