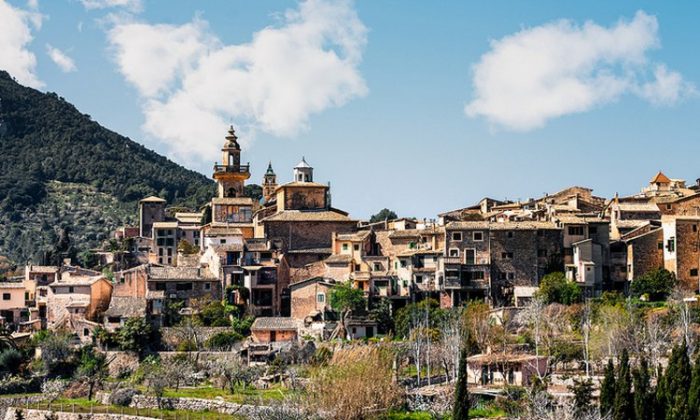 A Mediterranean Spring in Valldemossa

For those of you considering where to visit this Spring, allow me to present a bit of a hidden but famous gem situated in the Mediterranean Sea. The speck of a village of Valldemossa was built up around the 14th century, and became famous for its natural splendor via the influence of  Austrian Archduke Ludwig Salvator. The place has endeared virtually everyone who has ever visited, be they famous or not. This quaint place along the shores of the ancient sea must have been what world traveler, geologists and academian Edward Forbes was describing when he said:

Situated on to the North and West of the Island of Mallorca, this sleepy village is noted for one sightseeing landmark, the Royal Charterhouse of Valldemossa. However slim the tow’s touristic historic sites may be though, it’s the charming essence of this village in the coastal hills of the Tramuntana Range that’s attracted the likes of poets and playwrights, composers and naturalists.

Of the village itself, there’s all the local flavor of traditional Mallorca life anyone could ask for. The place is dotted with quaint little cafes, shops, galleries, bakeries and such, lining the winding narrow streets like hotel wait staff, bidding the visitor to partake. The local favorite, a potato cake called ‘coca de patata’ is something to partake of and remember, just how it’s soft richness blended with a thick hot chocolate. While the likes of Polish composers  Frédéric Chopin (see the Chopin Museum) or writer Jorge Luis Borges probably enjoyed the cuisine and other flavors during their time here, it was more likely the surroundings that appealed to their creative tastes.

Perhaps it was the feeling of isolation, combined with the sense of being a part of this beautiful place? Whatever the individual reasons for so many famous creators taking shelter here, the coastal town offers a flavorful natural character as the images reflect. To characterize this “special something” I talked briefly with an expert on Mallorca properties and investment, as well as the modern culture there this morning. Johannes Magar is CEO of Mallorca Finca, a property sales and consulting business with a worldwide investment focus. Something he said, in describing the various areas of the Island, it struck a cord where the “specialness” of this mountain retreat is concerned. Something Valldemossa possesses, a sort of “apartness” reminds me of a very few other Mediterranean Island villages. When I asked Magar about the relative seclusion and seeming underdevelopment of Valldemossa, he had this to say about the village maintaining this certain charm:

Geography has a lot to do with Valldemossa remaining what you might call a “pristine experience” both touristically and investment wise. Until just recently travel through these mountains to the village was arduous. With the new tunnel access we’ll certainly see more development there. However, the landscape prevents some kinds of wide-scale projects, so what’s most valued about the place will likely be preserved by geography too.

And there is was, the geography of this spot on Earth is astonishing. The closest places I can think of similar to Valldemossa are the myriad villages tucked away in the mountainous regions of Crete, or on Sardinia. This geography has insulated the favorite stomping grounds of Chopin. Now more easily accessible from Palma (only a 30 minute drive), Valldemossa is ideal for a day trip and touristy adventure. Many travel here for the hiking trails and biking, or trekking the nearby tranquil hills. Although the town has some of the most striking sea views on Mallorca, it is not a beach destination. Fishing boats sit out in Puerto de Valldemossa, with no signs of the typical sunbathing Meccas of commercials. While Chopin most likely never played golf here, the nearby Golf Son Termens holds a 7.3 rating at Golf Boo and is notorious for its greens and well manicured fairways.

Luxury accommodations are nearby, for those so inclined. Award winning stays like Mirabó de Valldemossa, a traditional finca transformed into a nine exclusive room hotel. There’s the famous Hotel Valldemossa as well, with it’s fabulous wellness center gardens and uncompromisingly elegant hospitality. Dining in the village can be a similarly exquisite experience either at the aforementioned Hotel Valldemossa, or at Michelin chef Joseph Sauerschell’s Es Raco d’es Teix, a traditional gourmet affair where  hearty meat dishes are out of this world perfect.

At the other end of the affodability spectrum, holiday rentals and fincas nearby cover the entire spectrum from the unimaginably expensive, to something on the order of €600 per week or less. Likewise, you can dine at places like QuitaPenas Valldemossa for €10 or less, or enjoy superb Majorcan cuisine right in the middle price wise at Sa Mata Restaurante.

Don’t expect to find a super cheap hotel nearby though, the rock bottom price for this region is around €100 euro per night, so you’re better off with a week long rental. To be sure Mallorca trends toward the more affluent traveler, but I assure you there is something for everyone who desires paradise for a while, or forever. To find out more about this fascinating destination I suggest visiting the village’s official website here. Another good source of information about Mallorca in general is SeeMallorca.