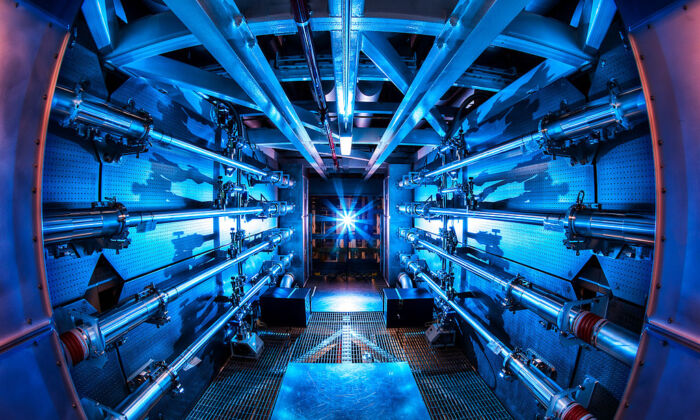 Lasers, going where no one has gone before. (Lawrence Livermore National Laboratory, CC BY-SA 3.0 via Wikimedia Commons)
Science

On Aug. 8, 2021, scientists took a laser the size of three football fields and focused all 192 of its beams of light on a capsule of hydrogen the size of a BB pellet.

When 192 laser beams focus on an area that size, it creates temperatures of more than 100 million degrees and pressure of more than 100 billion times the Earth’s atmosphere—conditions similar to that of a star.

Indeed that’s the point: To create ignition, and a fusion future, scientists are essentially trying to produce mini suns and possibly an inexhaustible form of green energy.

Moreover, on Aug. 8, three peer-reviewed papers confirmed what those researchers have known for the past year.

Fusion ignition in a lab is possible, something scientists have tried, and failed, to confirm since the 1950s.

In the experiment, researchers at the above labs recorded a yield of more than 1.3 megajoules (mJ) in less than 4 billionths of a second.

That’s 10 quadrillion watts of fusion power, roughly 700 times the generating capacity of the entire U.S. electrical grid at a given moment.

“The record shot was a major scientific advance in fusion research, which establishes that fusion ignition in the lab is possible at NIF [the National Ignition Facility],” Omar Hurricane, chief scientist for the Lawrence Livermore National Laboratory’s (LLNL) inertial confinement fusion program, said about the experiment.

“Achieving the conditions needed for ignition has been a long-standing goal for all inertial confinement fusion research and opens access to a new experimental regime where alpha-particle self-heating outstrips all the cooling mechanisms in the fusion plasma.”

In other words, for a short time, researchers reached the temperature needed to sustain fusion reaction, overcome external heating needs, and also all loss mechanisms (physical processes that cool the fusion plasma).

Although the team hasn’t been able to reproduce the same fusion yields of the 2021 experiment, they have been able to get yields in the 430 to 700 kilojoule range (one kJ is equal to 1,000 joules, and one mJ is equivalent to 1 million joules).

The repeated attempts have allowed researchers to compare and contrast the data gained from the experiments, providing clues as to “what went right and what changes are needed in order to repeat that experiment and exceed its performance in the future.”

“It is extremely exciting to have an ‘existence proof’ of ignition in the lab,” Hurricane said.

“We’re operating in a regime that no researchers have accessed since the end of nuclear testing, and it’s an incredible opportunity to expand our knowledge as we continue to make progress.”

To achieve inertial-confinement fusion (fusion involving laser beams focused on a small pellet of fuel), scientists must first fulfill the so-called Lawson criterion. In layman’s terms, that’s similar to what happens when a fire creates enough heat to spread from its initial fuel source to the area around it.

In this instance, the heat (energy) from the fire is enough to overcome the previously cold fuel and cause a chain reaction.

The goal with fusion ignition is similar, albeit on a much bigger and more complicated scale.

According to APS Physics, a fusion reaction can only occur in a hot, ionized gas (plasma) at temperatures exceeding 100 million degrees.

With fusion, two hydrogen nuclei collide with enough force to fuse, creating a single heavier nucleus of helium—yes, the elements change. That produces a significant amount of energy (heat).

Ignition occurs when that process becomes a self-sustaining thermodynamic feedback loop with rapidly increasing temperature—when the energy/heat from the fusion is enough to overcome cooling factors and continue forcing hydrogen nuclei together without external forces (such as laser beams).

Importantly, fusing hydrogen atoms releases nearly 4 million times more energy than a chemical reaction such as burning oil, gas, or coal. Plus, ignition is a self-sustaining reaction that doesn’t require fossil fuels, and the byproduct is helium (an inert, non-toxic gas that’s harmless).

Thus, according to the international nuclear fusion research and engineering megaproject ITER, fusion is a possibly inexhaustible form of green energy.