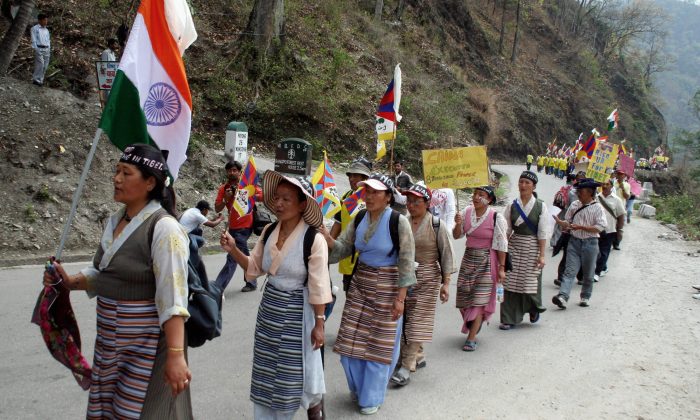 Tibetan Buddhist monks in exile and demonstrators march towards the West Bengal-Sikkim interstate border in Rangpo on March 24, 2008 as they continued their march towards the Indo-Chinese border at Nathu-La. (Diptendu Dutta/AFP/Getty Images)
Asia & Pacific

A Look at Tensions Along the Indo-China Border

Analysts doubt the dispute will be settled soon
By Gary Feuerberg

Last April, a Chinese border patrol of 30 to 50 soldiers made an incursion into India’s territory and camped there for three weeks before withdrawing. A de facto border between the two countries is known as the Line of Actual Control (LAC) and China’s incursion was 11 miles (19 kilometers) into the Indian side.

Conflicting border claims go back to the 1950s, not long after each country was formed in its current political framework (1947 for India, and 1949 for China, when the communists took over the mainland). New leaders inherited the border dispute from their predecessors. It has become the longest border to be disputed in the world.

The recent incursion was evidence that “the territorial dispute remains a considerable and continuous source of tensions in the [China-India] relationship,” wrote Jeff M. Smith, in a newly published book, “Cold Peace: China-India Rivalry in the Twenty-first Century.” Smith is director of South Asia Programs at the American Foreign Policy Council in Washington, D.C.

In October 1962, China and India went to war over the disputed Himalayan border, but since then there has been no open conflict. Smith said that nuclear weapons, economic interdependence, and geography make it highly unlikely that full-scale war would break out again. However, localized and limited conflict is likely.

So far, there have not been any deadly incidents since the 1970s, but there have been several hundred border incursions. The recent Chinese incursion was considered unusual by the extent of its distance and the length of stay, according to Smith.

Carolyn Bartholomew, a commissioner of the U.S.-China Economic and Security Review Commission, in testimony before the House Armed Service Committee on Nov. 20, 2013, said that this incident was evidence of “a simmering mutual distrust that continues to plague the relationship… As China’s global interests expand, Beijing is becoming increasingly assertive and active in its foreign affairs.”

The two sides have not even exchanged maps where they perceive the border, except for the Middle Sector. “There are several stretches where neither side knows where the border patrol has the right to go,” said Smith. In his book, Smith placed the onus on China for “stonewalling.”

China emphasizes its claim on the Eastern Sector “with the strategically vital border town of Tawang,” which India will never consider giving up, Smith said.

Yet, despite the prevalence of “geopolitical tensions and strategic mistrust,” economic and diplomatic ties have expanded, much like the Sino-U.S. relationship, said Smith. From 1998 to 2012, bilateral trade expanded 67-fold.

Military Build-Up
Since about 2006 when talks began to breakdown, a military build-up has happened on both sides at the LAC, said Smith at the Heritage Foundation on March 12.

This build-up makes it more likely an incident could erupt. In 2013, India announced that it would raise its first 50,000 person offensive Strike Corps to be deployed in the Eastern Sector. It has deployed its most advanced fighter aircraft and cruise missiles—all in order to keep up with China. The latter has built up the infrastructure in Tibet, which is easier for China to do than for India on its more mountainous side. India refrained from developing its side of the border until 2011, when it reversed its military doctrine. China has deployed fighter jets that operate at very high altitudes.

“For the past five years, India has been the world’s largest importer of arms despite an overwhelming superiority over Pakistan,” wrote Smith.

But India is only trying to keep up with China, he said.

Smith conducted over 100 interviews with relevant experts, government officials, and military officers in India, China, and the United States between November 2011 and July 2013. Indian and Chinese analysts told him not to expect a border resolution anytime soon—not even in 10 to 15 years.

Over the past decade, maritime security with regard to Chinese sea shipping lanes has emerged as a major concern for China. As its economy has boomed, China has had to become an importer of energy—oil and gas from the Middle East and Africa. The seaborne oil travels via the Indian Ocean. The ships must pass through the narrow straits of Malacca, between Indonesia, Malaysia, and Singapore. At the mouth of the Malacca Straits, are the Andaman and Nicobar Islands, territory that India has controlled since the 1950s but only recently has sought to build up.

In a time of war, this external energy supply vital to the Chinese military could be cutoff. The islands, unknown to most, give India a strategic advantage in the Indian Ocean.

Why Unresolved?
On several occasions, it looked like India and China might forge a resolution. In 1993, the first substantive agreement was reached on how to manage the border dispute. There was a follow-up in 1996. Cooperation at the global level in trade talks and climate change carried over to the border discussions. Two additional border protocols were signed in 2003 and 2005, and it appeared that after more than 50 negotiation sessions, a final resolution was at hand.

But in 2006, hopes faded for a resolution based on fixing the border at the status quo with the LAC.

In 2005, India signed a 10-year defense agreement with the United States as well as a civilian nuclear agreement that allowed India to receive assistance on its civilian nuclear program, despite not being a party to the Non-Proliferation Treaty. Indian officials told Smith that India’s rapprochement with the United States, beginning in the George W. Bush Administration, was important in influencing China’s less friendly posture toward India after 2006.

However, the most important factor keeping communist China from resolving tensions by far is India’s support of Tibet and the Dalai Lama, according to Smith. The Dalai Lama fled to India and set up a government in exile in Dharamsala in 1959. So, India is harboring the ruler, who constitutes a threat to China’s autocratic control of Tibet. India also hosts the Tibetan Government in Exile, which further irritates Beijing. The Chinese communist regime is banking on hopes that when the Dalai Lama, now 78, passes, it will gain control of his successor.

“So long as India has leverage in Tibet, China says it doesn’t have an interest in settling the border dispute,” Smith said.

Growing Rivalry
While Tibet and the Dalai Lama are the specific obstacles to peace on the border, in general, the Sino-India rivalry underlies the tension, which Smith said has grown at a faster pace in many arenas than areas of cooperation.

Currently it seems the balance of power is weighted heavily on the China side, which has more material advantages. India has one distinct advantage that the communist regime cannot match in the area of soft power. Since the end of the Cold War and the dissolution of the Soviet Union and its backing of New Delhi, India has earned a reputation in Asia as a nation that is passive, friendly, with a multiethnic democracy that can serve as “an external balance to the Middle Kingdom,” wrote Smith.