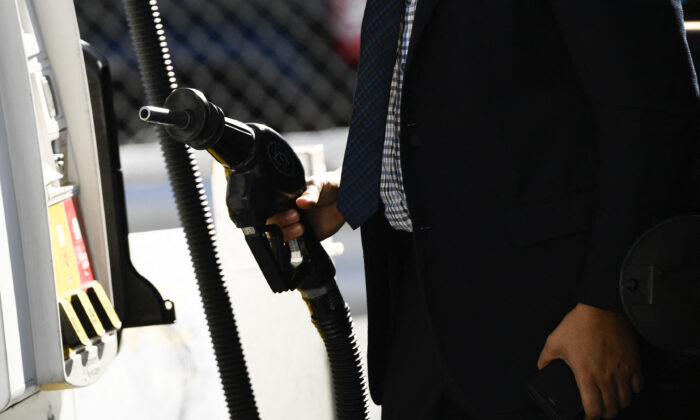 A customer returns a nozzle to a pump at a gas station in the Chinatown neighborhood of Los Angeles on Feb. 17, 2022. (Patrick T. Fallon/AFP via Getty Images)
Viewpoints

A Lesson From Aristotle

To listen to The Narrative emanating from the White House, you might think the inflation was Vladimir Putin’s fault.

He invaded Ukraine, didn’t he? And gas prices spiked.

“Make no mistake,” President Joe Biden said in mid-March. “The current spike in gas prices is largely the fault of Vladimir Putin.”

Ah, Putin. Is there anything he can’t do?

The problem with this feeble effort at scapegoating is that inflation was surging long before Putin invaded Ukraine.

Russian troops began lumbering over the Ukrainian border on Feb. 24.

But already in December, quoting President Ronald Reagan, I wrote here about “Inflation, the Mugger.”

“Inflation,” quoth the Gipper, reflecting on the Misery Index with which President Jimmy Carter had saddled the country, “is as violent as a mugger, as frightening as an armed robber, and as deadly as a hitman.”

By mid-December last year, the price of just about everything had skyrocketed.

Gas was up some 58 percent year over year, the cost of renting a car was up 37 percent, steak by 25 percent, and online apparel by 17 percent.

November numbers had just come in when I wrote, and they showed prices surging at a “record” rate, CBS stated.

At first, administration mouthpieces claimed that rising prices were no big deal because they were “transitory.”

“Inflation,” said Jen Psaki in October, “will come down next year.”

The highest, in other words, in 40 years.

Vladimir Putin is not to blame for this.

Joe Biden’s policies are, in particular, his “Green Energy” nonsense and his incontinent printing of make-believe money.

During his campaign, Biden several times promised that he would “get rid of,” “phase out” fossil fuels.

“I guarantee you,” he told one young woman at a rally, “we’re going to end fossil fuel.”

He has certainly tried.

He shut down the Keystone XL pipeline, throwing thousands of people out of work and signaling his hostility to the U.S. energy industry.

Now the chickens are coming home to roost.

You can see why.

According to Bloomberg News, the rising price of, well, just about everything will cost the average American household an extra $5,200 this year.

That’s $433 a month. Bloomberg calls this an “inflation tax.”

And of course this disaster is unfolding not just in America.

“In India,” a dour news story reports, “roadside restaurateurs are halving their palm oil use and moving into steamed snacks. Bakers in Ivory Coast want to cut the size of their standard baguette. Sandwiches from U.S. fast-food stalls are headed for fewer slices of bacon, pizzas for a more parsimonious sprinkle of pepperoni.”

Some countries with fragile economies are poised for true neediness, even famine.

But even countries with more robust economies will be facing what economists call “demand destruction” as prices rise, goods become scarce, and the mood of the people sours.

It turns out that the sanctions imposed on Putin by the Biden administration have caused at least as much pain to Americans as to Putin.

And it’s not just reflected in higher prices. The International Monetary Fund has warned that the sanctions are likely to chip away at the international dominance of the dollar.

“The unprecedented financial sanctions imposed on Russia after its invasion of Ukraine threaten to gradually dilute the dominance of the US dollar and result in a more fragmented international monetary system,” the Financial Times writes, citing an IMF official.

It’s difficult to say where it will end.

As of this writing, the Russian military in Ukraine seems to have hunkered down. They seem to have ceased advancing against Kyiv, but that doesn’t mean they’re withdrawing.

Sane observers are warning against escalation in the conflict with Russia.

In the last week, he has said that, should Putin use chemical weapons, he would respond “in kind.”

The White House then denied that by “in kind” he meant, well, “in kind.”

Visiting the 82nd Airborne in Poland, Biden more than hinted that he would be sending them to Ukraine. Things are bad on the ground, he said, as you’ll see “when you’re there.”

The White House walked that back, too.

Then in his speech in Warsaw, Biden essentially called for regime change in Russia. “For God’s sake,” he said, “this man cannot remain in power.”

Even French President Emmanuel Macron warned about Biden’s rhetoric. Meanwhile, Biden’s Secretary of State, Antony Blinken, wrung his hands and insisted that the United States didn’t have “a strategy of regime change in Russia—or anywhere else.”

Just how dangerous is the Biden administration to the American people and indeed to the world?

I’m not sure we are yet able to total up the losses or calculate the devastation wrought by the negligent incompetence of this regime.

I do, however, recall with sadness Aristotle’s observation that there are some courses of action that put one in a situation that is irretrievable.

One is then beyond the pale.

There is no right behavior, because you’ve put yourself in a situation that is unsalvageable.

I fear that is where Biden is now.