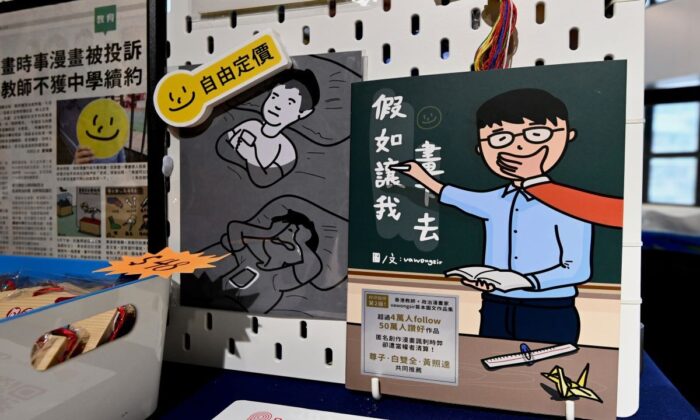 Photo of a cartoon created by VAWONGSIR, a teacher of Liberal Studies and Visual Arts in Hong Kong taken on May 2, 2021. His drawing of the cartoon was ruled "professionally unethical" by the Hong Kong government. He resigned in June 2021. (Sung Pi-lung/The Epoch Times)
HK Current Affairs

The year 2023 will be the last year for Hong Kong senior secondary school students to take the compulsory subject of Liberal Studies. After the subject is retired, the new subject designed by the Hong Kong government (HKgov), Citizenship and Social Development, will be its permanent replacement.

Before it was dissolved, HKLSTA had 300 members. According to the Charter of HKLSTA, the quorum required at least 10 percent attendance of its members, including proxy votes. For dissolution to be approved, yes votes were required from two-thirds of respondents. The Association posted a statement on its website to announce its dissolution and thanked all the Liberal Studies teachers for their past contributions.

During an interview with The Epoch Times, former President and Adviser of the HKLSTA, Cheung Yui-fai, said that the Association represented Liberal Studies teachers in Hong Kong.

Cheung said HKLSTA contributed to the development of Liberal Studies in the subject’s course preparation, curriculum development, and review. It also provided professional training to teachers and issued learning materials on current affairs to teachers and students.

In the past 17 years, the organization has worked with the Education Bureau and the Examination and Assessment Bureau on different projects, including public education, to present what Liberal Studies is as a subject.

When asked about the cancellation of Liberal Studies and the dissolution of HKLSTA, Cheung described both as “a glaring example of how Hong Kong’s pro-communist regime is suppressing Hongkongers and forcing a big step backward in Hong Kong’s freedom and human rights.”

Liberal Studies, when first introduced in 2009, was one of the four compulsory subjects for senior secondary schools under a curriculum reform. The aim was focused on enhancing students’ awareness of social issues while building critical thinking skills.

The subject, unfortunately, had been plagued in recent years by pro-Beijing figures’ accusations. They accused the subject of increasing violence in young people. The CCP’s media outlets even claimed Liberal Studies “taught young people to rebel against the governments of both Beijing and Hong Kong.”

In 2021 the Hong Kong government announced that Liberal Studies would be replaced by “Citizenship and Social Development.” The new course will no longer teach critical thinking. Instead, It will focus on the significance of safeguarding national security, the concept of being Chinese and having an identity of a Chinese national, and China’s recent accomplishments in areas such as high-end technologies and poverty alleviation. Hong Kong students are also required to go on ‘mainland study field trips’ at least once during their three-year course in “Citizenship and Social Development.”