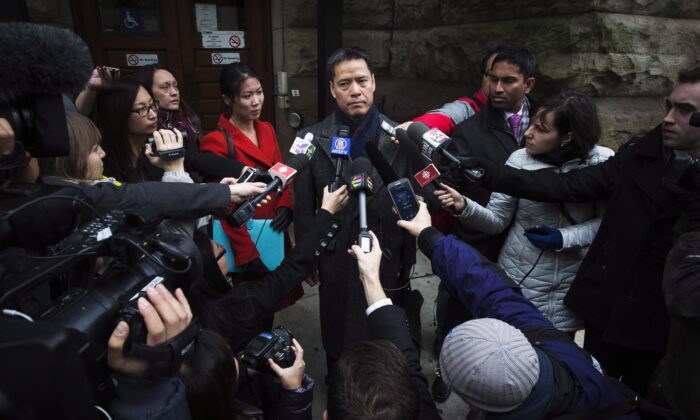 John Lee, lawyer for Qing Quentin Huang, who is accused of plotting to send sensitive information to China, speaks outside the courthouse in Toronto after Huang's bail hearing on Dec. 4, 2013. (The Canadian Press/Mark Blinch)
Canada

‘A History of Being Infiltrated’: Why Is Canada Not Catching Any Chinese Spies?

“We have a history of being infiltrated. We have no one convicted. And based upon rates of what’s going on in America [regarding convicting spies], we should have done it,” Spencer-Churchill, an associate professor of international relations at Concordia University, said in an interview.

His comments come after a recent case where a man accused of offering to provide Canadian military secrets to China was allowed, due to delays, to walk free without facing trial.

In December, the Ontario Superior Court stayed criminal proceedings against Hamilton resident Qing Quentin Huang, citing unreasonable delays by the prosecution in bringing the matter to trial. Huang was arrested in 2013 for allegedly plotting to send classified information on Canada’s shipbuilding strategy to China.

In a recent iPolitics commentary, Spencer-Churchill explores some potential underlying reasons for the lack of convictions, including the concern that the Canadian Security Intelligence Service (CSIS) and the RCMP may be ill-equipped to deal with industrial espionage, and the question of whether “political sensitivities” are interfering with their functions.

Referencing “Wilful Blindness,” a recent book by investigative journalist Sam Cooper that details money-laundering activities in Vancouver’s casinos, Spencer-Churchill writes: “There’s even fear that China has infiltrated different levels of government, allowing it to influence Canadian public opinion, public policy, and elections. CSIS and the RCMP clearly haven’t succeeded in infiltrating or gathering informants. Or perhaps there’s not much to infiltrate.”

“Americans have achieved much higher levels of convictions. So they’re actually actively out there looking, and they’re creating laws that make it illegal for Chinese to fail to identify their military links,” Spencer-Churchill told The Epoch Times.  “There’s no political will [in Canada]. The government is not pressuring the intelligence agencies to do anything.”

He said similar issues were also at play during the Cold War, with Canada not putting much effort into catching spies, saying that it’s a “structural issue.”

The issue of Chinese agents and the depth to which they are able to infiltrate institutions and different levels of government was highlighted earlier this month when Britain’s MI5 security agency took the unusual step of warning that a Chinese agent was active in Parliament. The agency said Christine Ching Kui Lee, who runs a law firm in London, was working in coordination with China’s United Front Work Department (UFWD) and had “established links” with British MPs for the Chinese Communist Party (CCP).

The UFWD is an organization of the Chinese regime charged with extending Beijing’s influence operations.

In the wake of the revelation, British Home Secretary Priti Patel said her government will introduce new legislation to counter foreign interference.

Spencer-Churchill notes in his commentary that Australia and the United States have enacted laws to compel the registration of foreign agents, including journalists working for Chinese state media, to help confront the issue of Chinese espionage.

In 2011, eyebrows were raised when it was revealed that Bob Dechert, a Conservative MP and parliamentary secretary to then-foreign affairs minister John Baird, had been engaging in “flirtatious emails” with Xinhua reporter Shi Rong.

A government report recently obtained by Global News said that Beijing has been engaging a “systematic campaign of intelligence-gathering, persuasion, influence, and manipulation” against Canada’s Chinese community.

In the case of Huang, a main factor causing delays was the lag time to provide information sought by his defence team that was under national security protection. The federal prosecution service is currently reviewing the case to decide whether to appeal. Huang maintains he is innocent.

“It sends a message to every person who does these sorts of crimes: You’re probably not going to get caught, and if you get caught, get excellent lawyers, spend enough money, drag it out, or take even reasonable steps that will have the effect of dragging it out, let the Canadian government drag its heels, and then see if a court will sanction the delay,” he said in an interview.

According to Goldkind, Canada is not confronting the issue of Chinese espionage effectively for multiple reasons.

“The first is the lack of resources to devote to true, complete, comprehensive police attention to the thousands and thousands of Chinese spies in Canada,” he said.

While Canada is having a net flow of money going to China through trade imbalance and China-linked criminal operations, among other means, Goldkind says that “we don’t spend the same kind of money to protect Canadian jobs, Canadian businesses, Canadian intellectual property, and perhaps just as importantly, Canadian political secrets and other top-secret security issues.”

Other factors, he says, include lack of specialized prosecutors who can process these espionage cases with expertise in a timely fashion, as well as delays when national security issues are involved. He says the government should address these delays to ensure such cases don’t take too long to get prosecuted.

But beyond the challenges in the legal system, there are major issues within the political system that lead to espionage cases not being effectively followed up on, Goldkind says.

“Both sets of obstacles [legal and political] could be changed quickly, probably the political system even quicker, but [it’s different] for the influence of triad money into the system by way of influence peddling, greasing the wheels of politicians, and for anybody who drives around Vancouver or Toronto and wonders why they see so many 21-year-olds driving Lamborghinis,” he says.

“We don’t kowtow to Namibia because we don’t need anything from Namibia. … We are not a slave to Luxembourg,” he says. But it’s different when a politician relies on “Chinese influence, Chinese votes, and Chinese dollars” to remain in office.

Compounding the problem, he says, is that in “2021–2022 woke moments,” any criticism of these issues gets attacked with “anti-Chinese” or “xenophobic” labelling.

Politicians look at how the media report on those who call out such issues and how they get portrayed as “anti-Asian,” and decide against taking a stance to avoid being labelled, Goldkind says, even though the issue has nothing to do with the people of China, but rather the ruling regime.

“Politicians are content to let their middle-class voters continue to drive 2008 Ford Broncos and to live in middle-class homes with significant mortgages, while they’re driving down the same taxpayer-funded roads paid for by the middle class—not paid for by the billionaire organized crime syndicates,” he says.

Retired RCMP officer Andy Brooke notes that Canada’s security agencies are actively conducting investigations into espionage and foreign interference cases. This was demonstrated in a case in December when the RCMP charged a Quebec man who allegedly used his status as an engineer with the Canadian Space Agency to negotiate satellite technology agreements with Iceland on behalf of a Chinese company.

But Brooke, who had been involved in investigating counter-terrorism and anti-money-laundering cases, wonders how well the case will be followed up.

“Will that case be followed, or will it quietly [like in the Huang case] fall off the radar when it too is dismissed, because a few months down the road, everybody’s forgotten unless some journalist takes it upon themselves to follow that,” Brooke said in an interview.

At the “grassroots level,” he says, the RCMP has very capable investigators, but there is an issue of priorities.

“When you look at the RCMP business plan for this year, and you see the language used, there’s very little about actually fighting crime. It’s more about diversity and inclusion than it is about crime-fighting,” Brooke says.

But there’s been an even more concerning change in recent years, he says, where there has been political interference in some cases.

Brooke, who is helping families of the Ukraine International Flight 752 shot down by Iran in 2020 seek justice, says there is very little the Canadian government is doing on that file, and even uses language that softens Iran’s culpability. He says he doesn’t know the reason behind that, given that Canada has very few dealings with Iran, but notes that Iran is a close China ally.

“We see there that behind Iran is China,” he says.

Another case Brooke mentions in terms of politicization of investigations is the 2020 Nova Scotia attacks, in which a man killed 22 people and injured three others using illegal firearms. He says the official communication early on after the tragedy was very poor on the status of how the guns where obtained and whether they were legal.

“The impression I got from the messaging was that it was being played down [because] politically it would have not fit the narrative for gun control,” he said. “If that shooter had been a licensed, security-cleared, law-abiding gun owner who used his own licensed weapons, that would have been released immediately.”

Yet another example he cites is when RCMP Commissioner Brenda Lucki in 2020 flip-flopped from initially rejecting the claim that there is “systemic racism” within the force to saying it is indeed a problem.

“She was simply caving into political pressure,” Brooke says. “It was so bad because the public looks to her statement as a reflection on all the good members of the RCMP.”

The Epoch Times reached out to Public Safety Canada and the Department of Justice for comment but didn’t hear back by publication time.

Col. J. Paul de B. Taillon, an adjunct professor at the Royal Military College of Canada, says the Liberal government of Justin Trudeau, similar to that of his father, former prime minister Pierre Trudeau, has been looking at China as an alternative trading partner to the United States—even at one point pursuing a free-trade option with the communist regime in 2017.

But Beijing presents a threat to the West, Taillon says.

“We’re looking at elite-capture, entrepreneurial crime. There are numerous open-source indicators that they’re involved in opioid issues in the West, to the extent that between January 2016 and March 2021, according to Canadian documentation, 22,828 Canadians died from opioids,” he said in an interview, citing data captured in parliamentary research.

Taillon says that, in its confrontation with the West, communist China is following a strategy outlined in a 1999 book by two Chinese military officers titled “Unrestricted Warfare.” The strategy involves use of military as well as non-military tactics to subvert targets, including drug warfare, media warfare, virtual warfare, and ideological warfare.

“We’re in a non-kinetic war with China, where they are using financial and diplomatic and network and trade as vehicles,” he said.

Editor’s note: This story was revised on Jan. 27 to update a comment on legal proceeding delays.