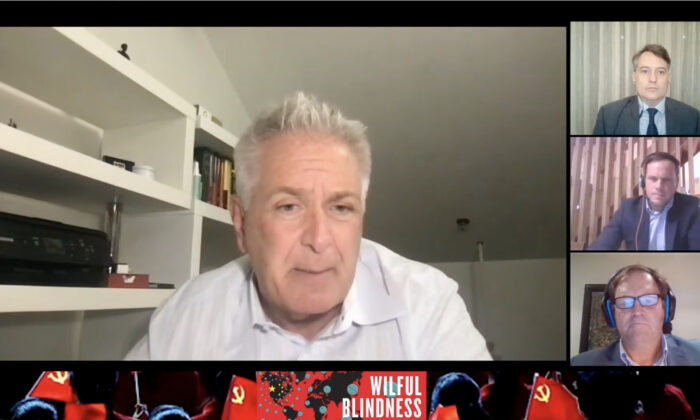 Investigative journalist Sam Cooper’s revelations of money laundering and communist China’s involvement in transnational criminal activities on Canadian soil was the topic of a panel discussion on Oct. 21, with one expert saying that Ottawa should do a better job of keeping the public informed.

Cooper’s book, “Wilful Blindness: How a Network of Narcos, Tycoons and CCP Agents Infiltrated the West,” details his investigation of suspicious money-laundering activities in Vancouver’s casinos. Following the money trail, he uncovers the intricate connections between drug trafficking organizations in Canada, Hong Kong triads, and the Chinese Communist Party (CCP).

The book reveals how these criminal activities fuelled the opioid crisis in Canada while driving real estate prices so high as to become unaffordable for many, and how the hands of law enforcement officials were oftentimes tied due to pressure from politicians.

Cooper was one of the speakers at the panel discussion, which also included Calvin Chrustie, a senior security and critical risk consultant at InterVentis Global, and Anders Corr, an author and publisher of the Journal of Political Risk. The moderator was Dean Baxendale, CEO of the China Democracy Foundation and the president of Optimum Publishing International, which hosted the event.

Cooper said that through access to confidential records, he learned that many suspects of transnational crimes attended the CCP’s United Front Work Department meetings in Vancouver, where they rubbed shoulders with elite Canadian politicians.

“We could see so-called cash-for-access political donation activity there, we could see politicians that would seem to start to pick up the line of the Chinese state,” he said.

“And this wasn’t just my recognition—if we had been listening to Chinese Canadians and Hong Kong Canadians that have been sources for CSIS [Canadian Security Intelligence Service] for two decades, they’d be telling the very same story that I revealed,” he said.

Chrustie, an internationally recognized expert in transnational organized crime and covert money laundering operations, said that when he was the intelligence officer for the RCMP in British Columbia, starting around 2007 there was an escalation of violence in the province involving other gangs in concert with the Chinese triad networks.

“Not only were the triads active—and they had been for a number of years, a decade or two before that with the Big Circle gangs—but there was an emerging threat that was inclusive of the triads, and that was the Middle Eastern organized crime networks, the Iranian networks,” he said.

Cooper outlines in the book how the Big Circle Boys, a powerful transnational drug cartel with ties to corrupt Chinese officials, real estate tycoons, and industrialists, were able to gain influence over significant portions of Canada’s economy due to decades of bad policy.

“There’s been a focus, ‘hey, just investigate, just collect intelligence,’” he said. “But as you do all those things if you’re not educating the public in terms of what’s going on it’s going to be a problem.”

On that front, he said, countries such as the United States, Australia, UK, and Israel where “intelligence is part of society” do better than Canada.

“In Canada, people can say there’s laws preventing it, and I’m sure there’s impediments there, but we haven’t done a good job until I think in the last year or so actually having these public discussions about it.”

Chrustie said there are certain individuals as well as the media who downgrade the seriousness of the problems, something that was also evident during the Cullen Commission’s inquiry into money laundering in B.C., at which he testified.

“I don’t know if they’re doing any favours to anybody in terms of not bringing forward the real issues and sugarcoating the seriousness of the threat,” he said.

‘Parallels Around the World’

Corr described Cooper’s book as “a tour de force of the links between the CCP and Chinese Communist Party gangs in Canada.”

“What I want to impress upon folks is that what Sam has detailed very closely in his book, there are parallels around the world that have not been as closely detailed,” he told the panel.

“What we see is a general pattern of Chinese Communist Party influence and utilization of whatever kind of bad actors, rogue actors, in the world that you see today, whether that’s Russia, which is arguably a bad actor, a rogue state, North Korea, Iran.”

“This is kind of the background, the global backdrop,” he explained. “I think what makes Sam’s book so important is that he goes into very deep detail in a way that we don’t have other places but we really should.”

He said the CCP also supports the Taliban in Afghanistan, and with the terrorist organization now in power, Beijing has access to trillions of dollars’ worth of natural resources.

“The Chinese Communist Party has had a huge victory in Afghanistan. They were waiting in the wings for this,” he said. “We’ve really made a huge blunder in Afghanistan, and we’ve handed the country to China basically.”

As the Chinese regime grows increasingly more aggressive politically and militarily, Corr warned that the world should not let its guard down.

“[China] is going to continue to rise, and the people who are claiming that it’s going to plateau for demographic reasons, I don’t really think that they’re thinking about how the CCP is able to influence capital cities around the world to do things that are absolutely against their [own] interests, economically, militarily, and otherwise,” he said.