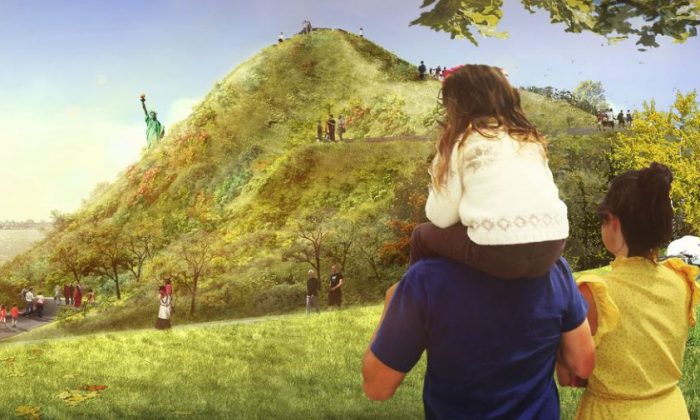 A family watches the Statue of Liberty emerging behind a hill on Governor's Island in New York in this photo rendering. The project will install four hills on governor's island. (The Epoch Times)
New York

A Hilly Oasis Starts to Rise on Governor’s Island

NEW YORK—Dig your toes into the grass atop a rolling green hill, feel the breeze from the Hudson River, and see the Statue of Liberty rising over the waters of New York Harbor. While it could be a description from a settler’s diary, it will actually be the final scene of a project called The Hills.

Started on July 25 on a hilly park on Governors Island, and perhaps an homage to Manhattan’s lush and hilly pre-colonial topography, the new park will feature four hills. The tallest, called Outlook Hill, will be 80 feet and offer panoramic views of the New York City skyline, the Statue of Liberty, and the rest of the harbor.

The shorter Discovery Hill, at 60 feet, will be home to art installations along its pathways. The 40-foot Slide Hill will have four slides amid shady trees for children and the young at heart. The smallest at 25 feet, Grassy Hill, will have plenty of space for picnic blankets and casual strolls.

The Hills will be built using recycled construction and fill materials. Before the park opens to the public in 2015, Governors Island visitors can view the progress of the construction from a viewing platform at Liggett Arch. Free tours will be offered on some weekends, hardhats required.

The total cost of the project is $75 million. Foundations and individual donors have already pledged $36 million to the project. Google CEO Eric Schmidt donated $15 million and attended the groundbreaking with his wife, Wendy Schmidt.

“The greening of Governors Island is an extraordinary contribution to the greening of the city, and I can just imagine the excitement when visitors to The Hills find themselves discovering never-before-seen vistas of the Statue of Liberty and the New York City skyline,” Wendy Schmidt said in a statement.

In addition to 11-acres to be occupied by The Hills, work is ongoing on 30 acres of parkland on the island. Work started on the projects in 2012. The first phase is on schedule to open to the public later this year. It includes Hammock Grove, Play Lawn and Liggett Terrace.

Historically the island was home to The Lenape Indians, Dutch settlers, British military, and the U.S. Coast Guard. It was opened to the public for the first time in 2004.

Today the park is home to a host of events every weekend. This weekend, among many other events, the park will host a poetry festival, a design class, a vintage baseball game, a truck with roller-skating equipment, a pop-up library, and classes on composting and on the history of shipwrecks.

For a complete list of events, park hours and directions visit: http://www.govisland.com/html/visit/this_weekend.shtml.