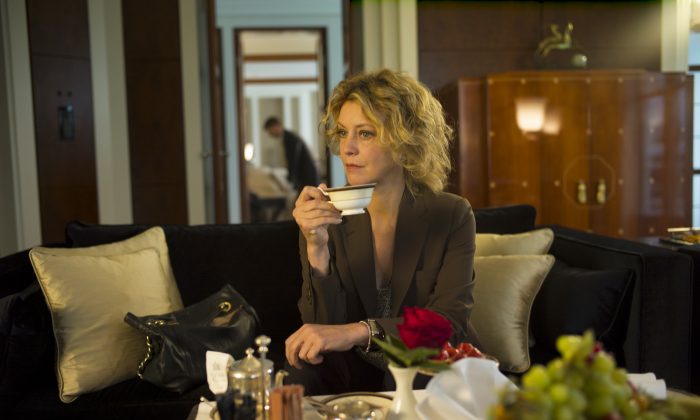 Irene (Margherita Buy) lives an isolated life as an inspector of hotels in the Italian film “A Five Star Life.” (Courtesy of Music Box Films)
Entertainment

‘A Five Star Life’: Life, Love, and Loneliness as a Hotel Critic

Irene Lorenzi is used to ordering soup for one—and she expects it served at a very specific temperature. It is not that she is too high maintenance to even find a dinner partner. It is her job.

Lorenzi is the mystery guest that five-star hotels dread. It is not the worst lot in life to draw, but it often is a solitary one, leading to a mild mid-life crisis in Maria Sole Tognazzi’s elegant dramedic bauble, “A Five Star Life.”

Lorenzi largely lives out of her suitcase, putting five-star hotels through a rigorous secret inspection process. When she returns home, she catches up with her sister Silvia and beloved nieces as best she can. She also tries to touch base with Andrea, her former lover who is now her platonic (and only) friend.

Like Lorenzi, he also has a hip job, but at least managing an organic food co-op keeps him down with the people—the Volvo-driving people. That is how he met Fabiana, a one-night stand turned pregnant girlfriend. He might just be ready to commit to marriage and fatherhood, causing Lorenzi to re-examine her own life.

Fear not, “Five Star” is far too smart for angst-ridden soul-searching. Despite all her misgivings, Lorenzi still enjoys her job. It also often serves as a convenient escape hatch whenever things start to get too real with Silvia and Andrea. Yet, all the lavish service makes it difficult to forge human connections.

Indeed, Tognazzi’s screenplay, co-written by Ivan Cotroneo and Francesca Marciano, presents a social critique of the opulent lifestyle rather than a political-ideological indictment. (At least that is how it plays on screen, regardless of their intent.)

Frankly, part of the inescapable appeal of “Five Star” are the highly cinematic resorts Lorenzi inspects in exotic locales such as Marrakesh and Tuscany. Nevertheless, it presents a unique take on a professional woman, wrestling with her life choices.

Given the focus on Lorenzi, the film largely rests on the shoulders of Margherita Buy, who won Italy’s equivalent of the Oscars for her lead performance. Smart, sophisticated, and reserved, she comes across like an Italian Cécile de France, which is not a bad thing. She certainly has the right look and mature substance to be a credible connoisseur of the best of the finest. The subtlety with which she reveals Lorenzi’s insecurities is also quite effective.

“Five Star” is undeniably narrow in scope, but it is nimbly sure-footed, giving viewers an intimate peak into a well-structured but unusual life. There is definitely very real drama at its core, but Tognazzi allows viewers plenty of time to revel in the rarified surroundings, which sparkle in cinematographer Arnaldo Catinari’s lens. It is all quite satisfying, like room service soup served at the proper temperature.

Recommended for fans of Italian cinema and those who enjoy gawking at exclusive locales, “A Five Star Life” opens Friday, July 18, in New York at the Paris Theatre.