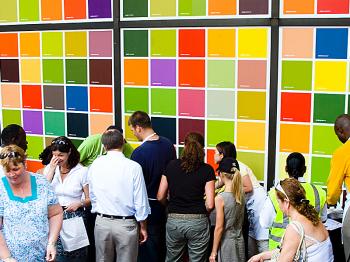 Free fruit and vegetables are handed out on the sidewalks to pleasantly surprised pedestrians at the Port Authority on Thursday as part of an art exhibit called: “Remember to Take Your Daily Dose of Color.” (Joshua Philipp/The Epoch Times)
US

A Dose of Color for the City

NEW YORK—“Free fruit New York!” called out vendors manning a table covered with an assortment of fruits and vegetables outside the Port Authority. Passersby lined up for free bags of the natural treats.

A mural of brightly-colored squares created by artist Tattfoo Tan decorated the wall behind the promotional fruit giveaway. The temporary exhibit can be seen on the exterior wall of the Port Authority facing Eighth Avenue between 41st and 42nd Streets.

With each colored square of the mural mimicking that of different fruits and vegetables, the piece, entitled, “Remember to Take Your Daily Dose of Color,” is meant to inspire a healthy diet in those who pass by. Stretching 13 feet high and 180 feet across the side of the Port Authority Bus Terminal, the vinyl mural was unveiled on July 17.

Dressed in all white, hair tied back in clean-cut samurai fashion, Tan gave contrast to the vibrant walls of the station. Tan said a few words about his work, mentioning that he had used what he calls the Nature Matching System, which functions as a reminder to consume a good day’s dose of color. Tan also expressed his view that the colors projected by every fruit and vegetable function as a kind of natural nutrition label. “It goes deeper than the eye,” said Tan.

Tan said that the project was inspired by fruits and vegetables and the intense colors that they naturally add to the world. He noted that many candies and junk food adopt similar colors, perhaps to evoke the same reaction in people that nature had intended with fruit. “When people walk by here at Port Authority, it’s just eye candy because it’s colorful blocks,” said Tan. “But, when people get intrigued or interested, they can find out more, and at the entrance there’s a key that explains the project. It also explains which color is derived from which fruit.”

The mural, which makes the building seemingly glow through its use of colors, adds an extra flare to the streets of Eighth Avenue. “This is very exciting, because if you think about it, a decade ago there were lots of, shall we say, ‘colorful street lights,’ in front of the Port Authority and we’re glad that’s a thing of the past,” said Tim Tompkins, president of the Times Square Alliance. “We’re also glad, a decade later that we’re adding out own dose of color to Eighth Avenue, and really that’s part of the continued transformation of Eighth Avenue that many of us have been seeing and many of those in the press have been writing about.”

Steve Napolitano, bus terminal manager for the Port Authority of New York and New Jersey, gave a few words on the new art piece. “Before this whole idea came up, I wasn’t the type of guy who would connect colors with eating healthy, but after today, and after seeing the wonderful colors that are outside this building, and after seeing the people outside who are handing out healthy fruits and vegetables, when I go down the produce isle, I’m going to think of it a little differently,” said Napolitano.