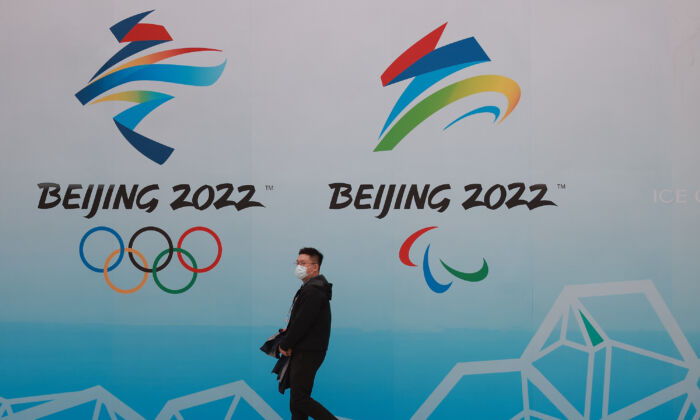 A Chinese man wears a protective mask as he walk in front the logos of the 2022 Beijing Winter Olympics at National Aquatics Centre in Beijing on April 9, 2021. (Lintao Zhang/Getty Images)
Viewpoints

A Diplomatic Boycott of the Winter Olympic Games?

The Biden Administration has announced that the United States will not officially participate in the Winter Olympics, scheduled to be held in Beijing from Feb. 4 to 20, 2022.

Although the diplomatic boycott means that there will be no official American representation in Beijing during the Games, Team USA will still be able to compete in the winter competition.

As expected, Beijing’s response was immediate and furious.

The CCP’s spokesperson expressed the hope that Biden would be alive in 2028 to witness the Chinese boycott of the Summer Olympic Games in Los Angeles. Regardless of Beijing’s vitriolic response, it could be expected that more nations will follow the American example.

In this climate of deteriorating relations between the two superpowers, it is incomprehensible that some prominent Australian politicians continue to applaud the People’s Republic of China unreservedly.

The most outlandish example of kowtowing to the Chinese regime comes from the former Prime Minister, Paul Keating, who, during a provocative address in the National Press Club in Canberra, asserted that Australia should stay out of any conflict between China and Taiwan. He emphatically stated that the destiny of the self-ruled island—a democratic country—is “not a vital Australian interest,” and he dismissed the prospect of a Chinese military invasion of the island.

Commentators and politicians roundly denounced his “ill-informed” views of China, which were contemptuous of the victims of Beijing’s human rights abuses and demonstrated an astonishing naivety about the impact of their actions on Australia. Keating is also the prime minister who once said that, in the last thirty years, China had the best government of the entire world. But Keating is not alone in his admiration of the communist regime.

The Premier of Western Australia, Mark McGowan, laments the continuing perilous and uncomfortable relationship between the Commonwealth and the People’s Republic of China. He urged the Commonwealth government to mend its deteriorating ties with Beijing and indicated that he would revisit China at the first available opportunity.

The present bumpy relationship is, in part, a consequence of the Australian request to establish an international fact-finding mission to ascertain the origins of the COVID-19 virus.

As is well-documented, Beijing forcefully rejected this request because it felt victimised and singled out by Australia’s request but eventually relented. However, the mission did not find any evidence that the virus originated in the Wuhan Institute of Virology.

But, since the release of this report, a second request to send another mission to Wuhan has also been rejected. In retaliation of Australia’s actions, Beijing imposed tariffs on wine and barley from Australia and impeded the importation of other Australian products, even admitting that these moves were politically motivated.

The Chinese Communist Party (CCP) is a particularly vindictive regime, as exemplified by its vicious response to the decision of the Lithuanian government to allow Taiwan to establish an embassy in its capital, Vilnius, by cutting off all trade links with that small country.

Of course, it is feasible that these politicians only consider the impact of bilateral trade relations with Australia without considering the ugly underbelly of deceit and duplicity.

However, great statesmen also consider the ethical foundations of a country’s actions. It is unconscionable to maintain relations with a country that oppresses its own people, is guilty of genocide, and practices duplicity—this may have happened in the case of tennis star Peng Shuai.

The present-day admiration and adoration of China have an uncanny similarity with Nazi Germany in the 1930s. There were also numerous non-German politicians at that time that preached the politics of appeasement and even regarded Germany as an example of a well-governed state. Hitler was often praised for restoring Germany’s faith in its own ability and for its demonstrable economic revival in the 1930s.

It is amazing that there are still Australian politicians who ingratiate themselves with the CCP. This is especially surprising in view of the overwhelming evidence that it exhibits the characteristics of an evil regime.

One only needs to refer to the Tiananmen Square Massacre of 1989 when scores of students were killed for promoting democracy in China, the brutal repression of the Uyghurs of Xinjiang province where an estimated one million people are incarcerated in re-education camps, the extinguishment of civil rights and democracy in Hong Kong, the organ harvesting and repression of people of faith like Falun Gong adherents and Christian minorities, and the militarisation of the South China Sea.

A commentator, Jeff Forsythe, told the following story in a comment to an article entitled #StopXinjiangRumors: Beijing’s Online Campaign to Whitewash Human Rights Abuses: Report, published by The Epoch Times. It is a disturbing story, but it illustrates the rapaciousness of the current communist regime.

A young lady was arrested illegally by the heinous CCP, her supposed crime was believing in God. They asked her to sign an organ release form and she refused. They pierced one ear drum, knocked out seven teeth and cut off her fingers. She escaped and when she recovered, she went to Beijing to make a formal complaint. She was brought to a field and repeatedly raped. When she became pregnant, they forced her to drink antifreeze. Hundreds of atrocities like these being committed every day by the heinous CCP with the blessing of Xi and the immorality of Wall Street.

How could any Australian politician disregard this barbarity, even claiming that China is governed well?

It would not be surprising if the diplomatic boycott of the Winter Olympics were to become a stampede. Politicians with a moral compass would argue that the boycott is an appropriate and proportionate response to the continuing abrogation of the most fundamental of human rights.