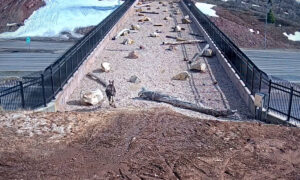 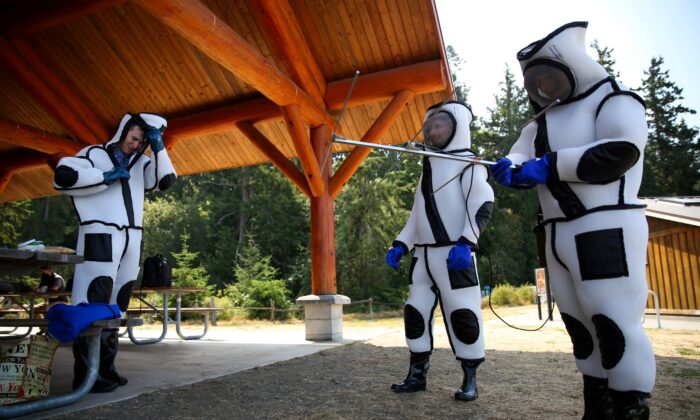 A Crash Course on Tracking, Trapping, and Killing ‘Murder Hornets’

BLAINE, Wash.—The first Asian giant hornet nest of the year has been found in Washington state, and plans are being developed to eradicate it, likely next week, the state’s agriculture department said on Thursday.

The so-called stinging “murder hornets,” the world’s largest hornets, can grow to two inches in length and prey on native bee and wasp populations, consuming honeybee hives and threatening agriculture.

“Any time you get any organism that is not native to an area move in, the consequences are really immeasurable,” said Sven Spichiger, the department’s managing entomologist.

A day before the nest was located, Washington and Oregon state Department of Agriculture employees gathered in an open-air classroom just south of the Canadian border to learn how to trap, track, and eradicate the invasive species.

The employees donned protective suits, complete with black boots and blue gloves, and practiced using telemetry systems to find the hornets, tag them, and then destroy their nests.

Thousands of traps baited with orange juice or jam are hung in trees along likely hornet flight paths. Once spotted, the hornet must be tracked to its nest, so its queen and other hornets can be destroyed, ideally before reproducing.

When a hornet is captured, it is fitted with a radio transmitter and released, in the hope it can be followed back to its nest.

Once a nest of Asian giant hornets is confirmed by thermal imaging to be in a tree, the tree is wrapped in plastic wrap to prevent escape while its trunk is hit with a piece of wood to get the hornets out so they can be vacuumed up and eradicated.

“My biggest fear for this year is that there will be lots of nests out in our county and we just don’t know where they are, that’s the biggest problem, is nests going undetected. So that’s why it’s so important for the public to continue telling us when they think they see one,” Looney said.