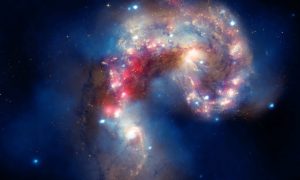 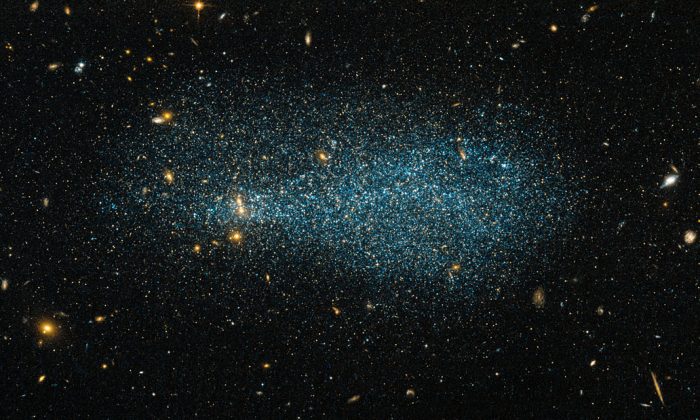 A dwarf galaxy: A challenge for modern cosmology? This dwarf galaxy ESO 540-31 is more than 11 million light-years from Earth, in the constellation of Cetus (The Whale). (Luca LimatolaESA/Hubble/NASA)
Science

A Cosmic Two-Step: The Universal Dance of the Dwarf Galaxies

Over the last few years we’ve been studying the orbits of dwarf galaxies and we expecting to find them buzzing at random around large galaxies. But looking out into the universe, we see some dwarfs undertaking an orderly dance with others, in coherent, well-defined orbits.

Such orbits are completely unexpected within our ideas of galaxy formation and evolution, so what do these new observations hold for cosmology?

The Standard Model of Cosmology

While the cosmos appears to be a very strange place, recent years have seen significant advances in our scientific understanding of its inner workings.

Since the universe was born in the Big Bang, it has expanded and cooled, with gas pooling into stars and planets, guided by the dominating power of dark matter and dark energy.

The fact that the standard cosmological model, known as Lambda-CDM, works so well has left astronomers with a bit of a quandary, namely where do we look to learn more about the universe? Anomalies usually point the way to new scientific discoveries, but everything appears to fit perfectly. Well, not everything.

In recent years, a lot of cosmological focus has moved from the large-scale universe to our own backyard, into the surrounds of large galaxies such as our own Milky Way.

The Problem With Dwarfs

For more than a decade, astronomers have worried about the missing satellite problem. While we expect a galaxy like the Milky Way to be surrounded by hundreds and thousands of dwarfs, we see only a handful.

Some think that many of these dwarfs were destroyed by violent stellar explosions in the early universe, something that we are only now beginning to understand. Others wonder if the very nature of dark matter prevents these dwarfs from ever forming.

While the missing dwarfs are a head-scratcher, more peculiar dwarf problems are now confronting cosmology.

Last year, we published an extensive study of our nearest cosmic companion, the Andromeda Galaxy.

It too has its own population of dwarf galaxies, and while we expect these to be buzzing around at random, we found that half of the dwarfs are orbiting on a well defined plane.

The existence of such dancing of dwarfs is a serious challenge to our cosmological ideas, especially as our Milky Way is similarly strange, possessing its own Vast Polar Structure of dwarf galaxies.

Strangers in a Strange Land?

So, the dwarf populations of the Milky Way and its sister galaxy, Andromeda, are weird. Should this bother us? Maybe not.

Maybe our local patch is somehow strange, an outlier compared to the rest of the universe? If so, we shouldn’t worry as the vast majority of the galaxies would behave as expected.

But just how special is our local patch? We decided to take a look.

We wanted to find the locations and velocities of galaxies in the relatively nearby universe, and luckily for us, someone had already done the hard work in the Sloan Digital Sky Survey (SDSS).

Covering a huge swath of sky with a dedicated telescope, this data is available to all. For us, we used it to find big galaxies and their associated population of dwarf galaxies.

With this data in hand, we could start to look at dwarf orbits. The test we applied was relatively simple, looking at dwarfs on opposite side of the larger galaxy and comparing velocities.

If galaxies were buzzing about at random, we would expect to see some chance alignments of dwarfs, but their orbital properties, their velocities, would also be random. In half the systems, both dwarfs would be orbiting in the same direction around the larger galaxy, whereas in the other half, the orbital directions oppose one another.

This is precisely what we found when we tried our test within the Millennium Simulation, one of our best synthetic representations of the universe.

But when we applied the test to our sample of galaxies from the SDSS, a rather peculiar signal emerged. Instead of seeing random dwarf orbits, we found that velocities tend to be correlated, with a pronounced signature pairs of dwarfs orbiting the larger galaxy in the same direction.

Our new results indicate that, at least for the dwarf pairs we examined, well defined orbits occur in about half of the large galaxies we looked at, although as we are seeing only the brighter dwarfs, the signal could be stronger.

Our patch of the universe does not seem weird after all!

But What Does It Mean?

The ubiquity of well defined dwarf orbits pose a significant problem for our cosmological models. We know we have difficulties understanding the complexities of gas physics and star formation in the early universe, but it is a mystery how this could guide dwarf galaxies onto well defined orbits.

For others, these small-scale cosmological anomalies are pointing to a breakdown of the standard cosmological model where we may need to rethink the existence of dark matter or even the law of gravity.

At the moment, we just don’t know what these coherent orbits are telling us. But they are a significant chink in the cosmological armour, and may be the anomalies that are pointing towards new universal physics.

It’s going to be exciting to find out!

Geraint Lewis receives funding from the Australian Research Council (ARC), including Discovery projects. He currently hold an ARC Future Fellowship. This article was originally published on The Conversation. Read the original article.