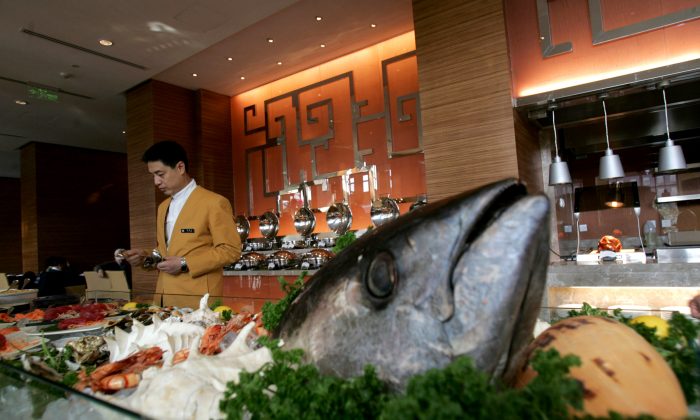 A waiter serves in the coffee bar of an upscale hotel in Beijing, on Feb. 2, 2008. (China Photos/Getty Images)
China

An unusual public fight has broken out between two local government agencies in China.

A state-owned hotel in China recently reported a long-term guest to the local anti-corruption watchdog, after he failed to pay bills totaling 8.9 million yuan ($1.29 million). The freeloading guest is a local official.

The Binzhou International Garden Hotel, though situated in the eponymous county within Shaanxi Province, is actually owned by a local government agency in charge of state-owned assets within the Xingtai City government, in Hebei Province to the north. After the hotel alerted its owner—a local branch of the state-owned Assets Supervision and Administration Commission (SASAC)—about the offending guest, it submitted a complaint letter to the Shaanxi government’s anti-corruption watchdog.

The hotel’s cross-provincial ownership is an unusual arrangement that has only appeared in recent years. According to a 2013 central government report, several local SASAC offices—including the one in Xingtai City—had major reorganizations and mergers to make the best use of natural resources and industry manpower. Such mergers included cross-province mergers.

In trying to settle outstanding accounts with top officials in the Binzhou county government who use the hotel’s catering services when hosting guests, the Xingtai SASAC sent the complaint letter.

“From the beginning of 2013 to February 2018, the Binzhou County Government’s Reception Office [in charge of paying officials’ catering expenses] owed more than 8.5 million yuan [roughly $1.23 million] to our subsidiary company Binzhou International Garden Hotel,” the complaint letter read, according to a May 27 report by Chinese state-run media The Paper.

“The Binzhou County Chinese Communist Party committee and Binzhou county government seriously violated eight provisions set out by the central government, [including by] ordering extravagant meals, drinks, and entertainment for themselves and their guests. The massive unpaid bills to the hotel all resulted from these corrupt practices,” the letter continued.

The complaint letter pointed out that the main perpetrator was the then-Party boss of Binzhou, Zhang Shengli, who ordered lavish banquets and ceremonies from the hotel many times and deliberately delayed the payments. In order to conceal the owed payments, the reception office director, Li Bin, placed the outstanding hotel bills—more than 200 between 2013 and 2018—under other people’s names, such as Zhang Jia and Li Yuanyuan, who are both on staff at the reception office, the letter alleged.

Zhang has already left his Binzhou post, after being appointed deputy mayor of Yulin City, also in Shaanxi Province, in April 2018.

The massive unpaid bills put a huge financial burden on the hotel, but the hotel executives and employees didn’t dare to do anything about it, because the account belonged to local authorities, the letter continued.

An itemized list of the unpaid bills was provided at the end of the letter.

According to the hotel website, it’s a luxury property that offers high-end catering and a wide range of facilities, including an indoor swimming pool, a fitness center, an open-air cinema, game rooms, and karaoke suites.

Nonetheless, the hotel website doesn’t disclose that it’s owned by a government agency.