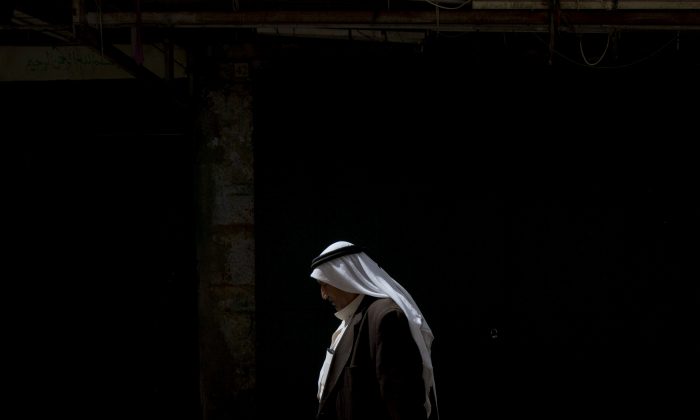 A Palestinian man walks in the Old City in Jerusalem, on Oct. 8, 2015. (AP Photo/Sebastian Scheiner)
Opinion

The upheaval sweeping the Middle East suggests that it will be extraordinarily difficult if not impossible to resume the Israeli–Palestinian negotiations and reach a successful outcome. On the contrary, because of the prevailing political conditions and the continuing rise of extremism in both communities, the resumption of peace talks is as timely as it has ever been and these conditions may, in fact, lend even more urgency in the search for a peace agreement.

Moreover, waiting for these raging conflicts to settle down before resuming the peace negotiations is not an option. Many of these violent conflicts will last for years and may well get much worse before they presumably create a more conducive environment to restart the talks in earnest.

There are six fundamental reasons that explain why the present geopolitical environment is conducive for the resumption of peace negotiations and why outside constructive intervention has become sine qua non to reaching an equitable peace with security.

First, the Regional Turmoil. Contrary to common wisdom, the turmoil sweeping the Middle East, the convergence of multiple conflicts, and future uncertainties have created new compelling circumstances that support the resumption of peace talks. Whereas the regional conflicts—particularly in Iraq, Syria, and Yemen—distract attention from the currently less violent Israeli–Palestinian conflict, the relative low level of violent clashes is deceiving and cannot be taken for granted. As the Palestinians’ frustration continues to grow, so does the risk of an even greater violent flare-up, which can be avoided. Recent violent disturbances in Jerusalem and several Israeli cities only attest to this eventuality.

Israelis and moderate Palestinians are alarmed about the possibility that ISIS will find, if it hasn’t already, fertile ground among radical Palestinians.

Although the Netanyahu government denies any connection between the occupation and the violent frenzy sweeping the region, most Israelis and moderate Palestinians are alarmed about the possibility that the Islamic State (ISIS) will find, if it hasn’t already, fertile ground among radical Palestinians who detest the Israeli occupation and their own leaders more than they loathe ISIS.

It is true that this has not manifested itself in any significant way as of yet, but it is only a question of time (even if defeated in Iraq and Syria) when ISIS will establish active cells to act against both Israelis and moderate Palestinians.

Opening Israeli–Palestinian negotiating channels would prevent such an outbreak and would allow the Arab states to focus on the present danger posed by ISIS and the Sunni–Shiite proxy war (led by Iran and Saudi Arabia) over regional hegemony.

Second, the Arab States’ Eagerness to End the Conflict. The Arab states have for more than two decades been calling for an end to the Israeli–Palestinian conflict based on a two-state solution, which was formalized by the introduction of the Arab Peace Initiative in 2002.

With the exceptions of Egypt and Jordan (that forged their own peace agreements with Israel in 1979 and 1994, respectively), the rest remain tied to their positions not to normalize relations with Israel before the Israeli–Palestinian conflict is settled.

Interestingly, many of the Arab states in the Gulf and North Africa have developed clandestine relations (including exchanging intelligence) with Israel over the past 10 years, and they no longer view Israel as an enemy but instead as a potential ally against their common enemies—Iran and ISIS. As they see it, once peace with Israel is established, they can create a crescent from the Gulf to the Mediterranean that will be a formidable bloc against the Iranian crescent, which includes Iraq, Syria, and Lebanon.

Third, the Arab Peace Initiative (API): The API is still on the table and can provide an overall umbrella for the negotiations, which would allow the Arab states to lend significant psychological and practical support to the Palestinians and the peace process. Furthermore, since Israel is particularly keen on ending the Arab–Israeli conflict, the API provides a clear road map to peace between Israel and the Palestinians in the context of a comprehensive Arab–Israeli peace. The United States and the EU can use their leverage on the Israeli government to also embrace the API, particularly since the majority of Israelis, including former top security officials, strongly advocate for the adoption of the API.

Fourth, Hamas’s New Disposition. The Arab states, especially Saudi Arabia, Qatar, and Egypt, are in a position to exert political and material pressure on Hamas to formally adopt the API, which will provide common denominators with Israel about the principle idea of a two-state solution. Consistent with the API, on more than one occasion Hamas has clearly stated that it is willing to negotiate a peace agreement with Israel based on the 1967 borders. This is not to suggest that Hamas is ready and willing to make the necessary compromises to achieve peace, but it does suggest that Hamas also understands that Israel is there to stay and is now looking for ways to accommodate the Israelis in return for easing the blockade and eventually lifting it altogether, bringing an end to the occupation.

Fifth, the U.S. position. President Obama may well be more inclined at this particular juncture in his presidency to breathe new life into the peace process. However, he realizes that any resumption of Israeli–Palestinian negotiations fashioned along the line of previous negotiations with U.S. mediation will fail, not only because of political factionalism in Israel and among the Palestinians, but also because he is domestically constrained to pressure Israel unilaterally, especially during presidential elections.

That said, Obama stated in March 2015 that the United States is reassessing the situation and is considering a different approach to tackle the conflict. Given that the United States has a moral and material stake in Israel’s well-being and is committed to its preservation, it is in a position to shape and influence any international initiative to achieve that very objective.

Notwithstanding the fact that Israel has enjoyed tremendous political support from both Congress and the American people, there is a definite shift among the public and leading politicians toward putting the blame on Israel for the continuation of the conflict. By demonstrating tough love, the United States can fulfill its moral obligation to best serve Israel’s national security and preserve it as an independent Jewish and democratic state, which for nearly all Israelis is their most cherished dream.

Sixth, the EU’s Growing Stakes in Peace. Given the increasing turmoil in the Middle East, the EU is more eager than ever before to play a larger role in settling the Israeli–Palestinian conflict, which they view as another flashpoint that adds more fuel to the regional fire. Europe is suffering from domestic Islamic radicalization and considers the resolution to the Israeli–Palestinian conflict as one of the central components to significantly reducing radicalization at home while protecting its extensive interests in the region.

Moreover, the European community has come to the conclusion that Israel’s intransigence is behind the stalemate and that by not acting now, they will in fact render serious disservice to Israel, which they view as an important strategic ally, especially from a security perspective.

In spite of the growing Boycott, Divestment and Sanctions (BDS) movement throughout Europe, they prefer to avoid taking such punitive action against Israel without the support of the United States. That said, they appear to be determined to formulate a joint action plan led by France in an effort to end this debilitating seven decades-old conflict, which is bound to explode to their and their regional allies’ detriment.

Integration Is the Open Secret to Deradicalization

A careful review of the above suggests that due to unfolding regional events, the shifting geopolitical dynamics within the Arab states, the changing nature of the bilateral relations between Israel and the Palestinians, and the strong Western desire to bring an end to the conflict, the conditions are ripe to reach a comprehensive Arab-Israeli peace.

That said, neither Prime Minister Netanyahu nor, to a lesser extent, President Abbas will come forth with a framework for peace where critically important compromises must be made.

A change of leadership will be necessary to bring this about, but that can happen only under intense U.S. and EU pressure.