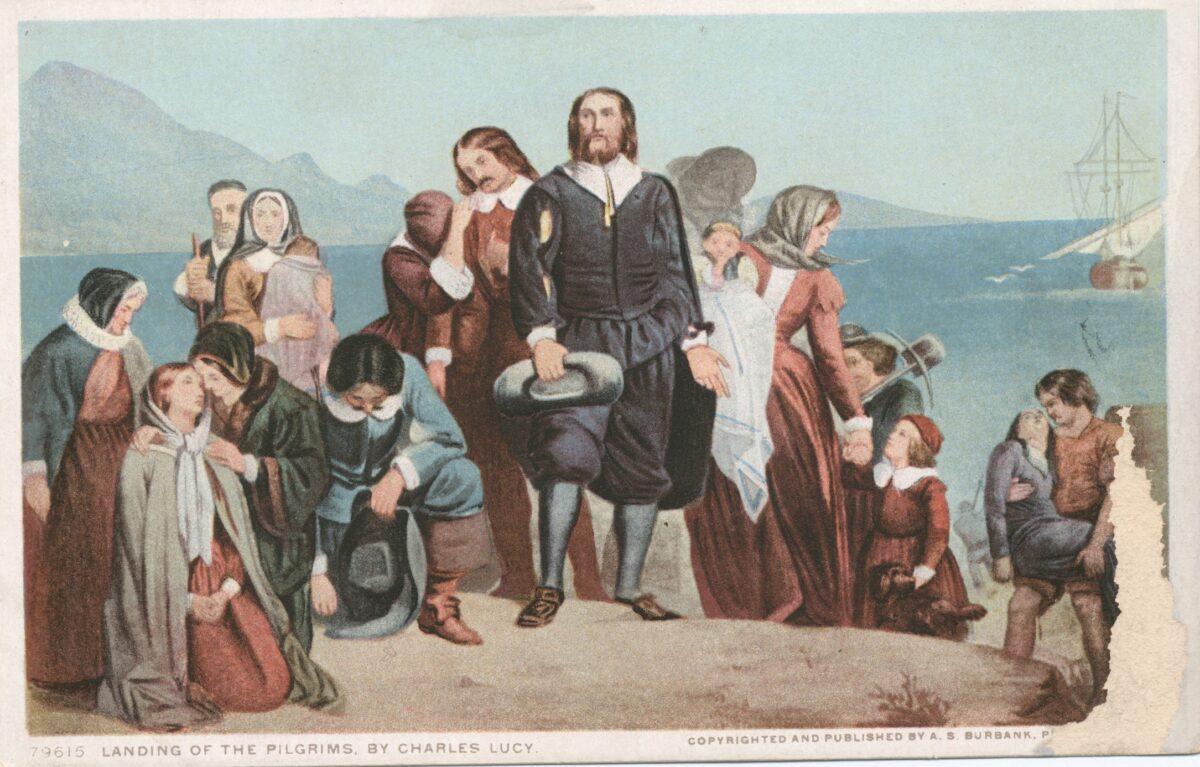 The journey was harrowing, but so was every challenge the Puritans were to meet in the New World. “Landing of the Pilgrims,” circa 1898, by Charles Lucy. New York Public Library’s Digital Library. (Public Domain)
EpochTV Reviews

A City Upon a Hill: How America’s Biblical Values Set It Apart

I highly recommend watching one of the latest series on EpochTV, entitled “The American Story.” Referencing the original historical documents, the series tells the inspiring and true story of America’s early years, often in contrast to the narratives we hear today.

In episode four, “Early Colonies and the Great Awakening,” host Timothy Barton, President of WallBuilders, and Jonathan Richie, Assistant Director of the American Journey Experience, use historical documents and artifacts to tell the story of America’s earliest colonies, along with their Biblical values that influenced civil society, justice, and liberty.

An Example for the World

Following the Plymouth Colonies’ example, large waves of migrants from Europe began coming to the colonies in search of religious freedom. In 1630, about 1,000 men traveled with a man named John Winthrop to America aboard the Arabella. During the voyage, Winthrop writes that if he and the colonizers could follow God’s ways and instill Biblical truths and values into the new world, it could become a beacon of light for others. “We shall be as a city upon a hill, the eyes of all people are upon us.”

Although the phrase “city on a hill” is derived from a Bible verse, it is often used as a reference to the example of freedom and human rights displayed by America to the rest of the world. For Winthrop and the other colonizers at the time, religious liberty was key to living how they wanted without interference from the government, and also to instilling principles and values that would aid in a prosperous and thriving society. This idea spread to surrounding colonies.

Today, we often hear how “intolerant” the Puritans were. An example that is often referenced is the Salem Witch Trials. In the EpochTV episode, Barton and Richie note that the Puritans were ahead of their times, as not a single Puritan colony had more than 15 capital crimes, whereas in England, there were over 200 capital crimes that a person could be put to death for.

The witch trials arguably went on for about 18 months in the colonies. A total of 27 people died during this period, 19 were executed and eight died in prison. Richie says it is worth noting that there were also witch trials going on in Europe at the same time, however the European trials went on for decades. An estimated 500,000 people were put to death in the European witch trials, among those 30,000 in England, 75,000 in France, and 100,000 in Germany.

Why did the trials go on for decades in Europe and not in America? Barton credits this to stronger Biblical principles in America that led to improved human rights. For example, Puritans recognized the right of due process, derived from biblical principles that the accused should be able to confront their accuser, bring forth witnesses, etc.

The Puritans confronted the Judge who was spearheading the witch trials in the colonies, saying the trials were not being done biblically. It is documented that the judge confessed and repented in front of his church congregation and the church assembly established a day of prayer and fasting to ask for God’s forgiveness. The Puritans even granted restitution to families whose loved ones had been killed.

Although the Puritans weren’t perfect and they made mistakes, they certainly handled the witch trials differently than the European witch trials. Barton says it’s easy to look at the witch trials and judge the Pilgrims for being intolerant, but he says it’s always important to judge people according to the context in which they lived.

The American Story | Early Colonies and the Great Awakening

Did The Early Colonizers Steal Land from the Natives?

Many of the early colonies were led by pastors and founded for religious reasons. William Penn was one of these pastors. He came from a wealthy family in England and was intrigued by the Quaker’s beliefs. Since the English were required to be Anglican at that time, he eventually led a delegation of Quakers to the new world.

When they arrived, Penn discovered Natives were living there already. He recognized that just because the King gave him the land of Pennslyvania on paper, the Native people were the true owners, as they were already living there. Based on his religious principles, Penn met with the natives and purchased the land from them at an agreed-upon price. This practice of buying land from the natives continued and is well documented, with legal deeds of land purchased from the Native Americans during the early period of colonization.

Richie notes that this is significant because the Indians did not operate this way toward one another. When a Native tribe wanted more land, they would conquer the nearest tribe and take the land. The colonizers were introducing a new practice of exchanging value instead of fighting for it.

Barton says as America enters the Jacksonian era, and as certain American leaders stray away from Biblical understanding, there is a shift in how Native Americans were treated. However, in the early colonization period of American history, the notion that Americans stole the land from the Native Americans is simply not historically accurate. This is why Barton stresses it’s important to go back to the original documents, saying oftentimes they tell a very different story than the narrative of the day.

His journeys began when he traveled to raise funds for an orphanage. On his initial journey, he found there were divisions among the various denominations. He thought this to be a problem, believing the colonies needed to be united. Whitefield had many thoughts on how the early colonies should operate, such as having their own military and not simply being dependent on England. Several of his suggestions eventually became influential in the American Revolution.

Being a missionary and traveling required funds. Whitefield was funded by Selena Countess of Huntington. She was a significant character in England who funded religious figures per her passion to minister and spread Biblical principles and freedom in America.

Barton says that throughout history, there are many pieces in the American story where people begin working together and doing their unique parts, laying the foundation of what would come next. Whitfield’s message of Christian acceptance and unity was in contrast to the English church at the time and resulted in a very different legacy.

Are Biblical Values Good for Society?

The EpochTV episode reveals how America was built on largely religious principles and the desire for religious liberty. This may sound like a good or bad thing, depending on who you ask, but the historical documents show how these beliefs manifested themselves among the early colonizers, and how Biblical values played out in society.

Although there were plenty of leaders and scenarios where bad things happened, the historical documents do show that when the early colonies made mistakes, they often corrected their course at a much faster pace than other places around the world, and this would happen largely due to their adherence to Biblical principles.

Emily Allison
Follow
Emily is a writer for The Epoch Times and a freelance political journalist. With an extensive background in Political Communication and Journalism, she is committed to serving her country by bringing the truth about important issues of the day to the American people.
SHARE
Friends Read FreeCopyFacebookTweet
You May Also Like