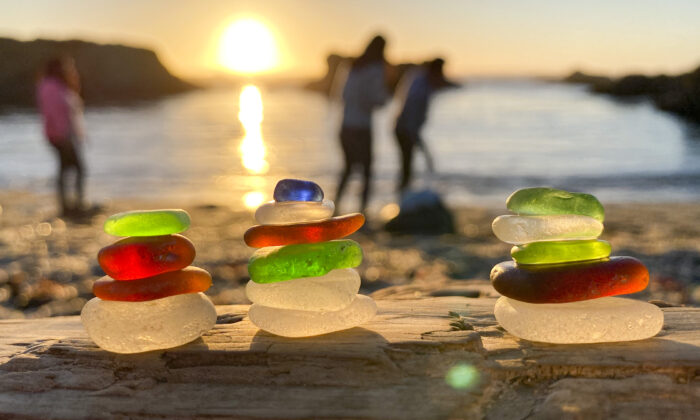 FORT BRAGG, Calif.—Millions of smooth glass pebbles blanket the shore near Fort Bragg, giving the famous site its name: Glass Beach. Though the glass pebbles are not quite an all-natural formation, they’ve been drawing tourists for decades.

Joseph Cass Forrington, a former sea captain and owner of the Sea Glass Museum, said it was just considered a local beach when he visited with a friend.

“We were sitting there one day, and I was looking around at the glass, and I said, ‘This is pretty.’ I said, ‘Someone should do something with this,’” Forrington told NTD, a sister media of The Epoch Times. “And I had two girls in college at the time that were keeping me tapped out—I’m on a pension, you know—so I wanted a little money to go play golf. And I haven’t played golf since I started doing it, but that’s what the original intent was.”

He started to collect the glass and show his collection in a small display at a friend’s house.

“[The friend] was there one day, and a woman came in and [seeing] just the one display case she said, ‘Boy, this is like a museum.’ He told me that, and I said, ‘Well, actually, I’d like to start a museum,’” Forrington said.

So the friend cleaned out his office to make space for display cases. It was a hit, so they cleaned out another large room. They kept cleaning out rooms until he was able to display the collection he has today.

Since 2005, he has owned the Sea Glass Museum and sold sea glass jewelry.

The glass, which is now treasured by Forrington and tourists alike, started out as trash discarded at sea. Then nature took over, polishing and beautifying man’s waste.

“Our ancestors didn’t have landfills and places to take their trash. So if you lived on the water, on the river, on a lake, on an ocean, on a bay, that’s where you threw your trash. Now, there was nothing wrong with it; it was all biodegradable, which meant it was bio-nourishing,” Forrington said. “What makes Fort Bragg different is that the rock formations here set up wave patterns that keep everything on the beach. Nothing ever washes away here. So they didn’t realize it at the time, of course, when they started dumping.”

Forrington said those types are rare because they weren’t made much.

“The reds are rare because they’re mostly used in the taillights of old cars, and the oranges were the turn signals of old cars. But the bright red has gold in it to give it its luster,” he said.

He sorts and identifies them with the help of the book “Pure Sea Glass” by Richard LaMotte.

The museum also has a blacklight room that makes the glass glow.

“There were two makers that, back in the 30s, put uranium in the glass to brighten the colors. And that was mostly in the green, jadeite glass. That’s a very popular thing,” Forrington explained. “And it wasn’t just the green; they put [it] in other colors too to brighten them—some aquas, some reds, bright oranges and bright limes and bright yellows.”

It became an official dumping ground in 1906 after the earthquake.

According to Forrington, Glass Beach used to have a layer of glass seven feet thick. Now it’s mostly depleted.

Because of the bio-nourishing aspects of glass, Forrington believes it’s important to locally recycle the glass to replenish the beaches.

“Sea glass has created the richest marine environment in at least Northern California. And that’s because glass is made, colored, and clarified with minerals. And as the glass dissolves in salt water, which gives us this nice patina, it releases those minerals, and that’s the basis of the food chain. So our glass beaches are teeming with life. In between the glass, you can’t even see—microflora, microflora, and the little shrimps and worms and insects that are there eating those.”

Forrington advocates for the formation of glass reefs to initiate a food chain in depleted areas worldwide.

To make up for the depleted glass, he sells pouches of polished glass for visitors to throw back to the beach.