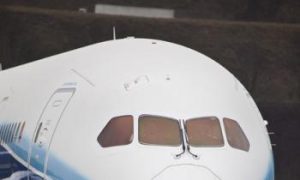 Airlines To Be Fined for Making Passengers Wait
0 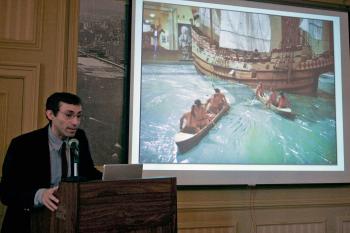 Dr. David M. Oestreicher, an expert on the Lenape, or Delaware, people stands next to a depiction of the Native American canoes greeting the European vessels off the shores of New York City. (Tara MacIsaac/The Epoch Times)
US

NEW YORK—In the 1970s, a young boy in the Bronx dreamed of being an Indian. Getting an English-Lenape dictionary for his 15th birthday marked the first step in his life-long journey through history and culture of the original inhabitants of New York City.

“I pored over the old words, thinking to myself that if I learn something about the language, I would have some insight as to the culture, because culture and language are so inextricably linked,” said Dr. David M. Oestreicher.

While Oestreicher could not exactly follow the dream of his youth and become an Indian, he became an anthropologist and a leading expert on the Lenape people instead.

He lectured from Pershing Hall on Governors Island on Wednesday. His discussion of the Lenape was the last lecture in a six-lecture series called “Access Restricted,” presented by the Lower Manhattan Cultural Council (LMCC).

“Access Restricted” opened up sites normally off-limits to the public. Audience members learned about the history and culture of Lower Manhattan in an environment related to the subject matter.

Governors Island was once called Pagganck by the Lenape. The root “Pagg” means splitting and is associated with nuts, suggesting the island was a place for cracking nuts. Rockaway, or “Rack-a-wak-e,” referred to a sandy place. Hackensack, “Achinigeu-hach,” referred to a place with sharp ground. The language was tied to the land; it described the land and varied from region to region.

The people of the sandy place spoke a different dialect compared to the people living where the ground was sharp, explained Oestreich. The Lenape were not a unified body—not until the Europeans came and drove them onto a common land, the territory along the Delaware River. This is how they eventually came to be known as the Delaware people.

When they lived in the area that is now New York City, the Native Americans would refer to themselves as Lenape—which simply means “people” or “common people”—in addition to their village name.

“They tended to go by their local village names much more frequently than they did by the term Lenape,” said Oestreicher. He likened it to the way “we might say, 'I'm a New Yorker, you're a Californian,’ but perhaps if we meet someone from France, we might say, 'I'm an American.'”

As the Europeans settled the land, the Lenape were scattered far and wide. Most went to Oklahoma, Wisconsin, or Ontario, Canada. Some went as far as the Rocky Mountains.

By the time Oestreicher was born in the 1960s, the only remains of the Lenape in the region they had inhabited for at least 12,000 years were the delightfully strange names like Manhattan, Rockaway, Hackensack, Hoboken, Passaic, and Tappan.

Soon after getting his Lenape-English dictionary, the young Oestreicher found use for the words he was rapidly absorbing.

Oestreicher read a New York Times article about Nicholas Shoumatoff, a museum curator in Westchester who had gotten a grant to find and work with Lenape descendents. The two got in touch, and Shoumatoff took the young ethnologist under his wing.

Oestreicher’s father drove him to meet with Shoumatoff, as he was not yet old enough to drive. Shortly thereafter, a delegation of Lenape from North East Oklahoma came to New York, returning to the land of their heritage for the first time in generations. At their gathering, in 1977, a 15-year-old Oestreicher struck a friendship with a Lenape medicine woman, Touching-Leaves-Woman. Their friendship would last until her death in 1984.

“She was one of only six people left who spoke her dialect of Southern Unami, and who had attended the ceremonies like ‘the big house’ and ‘the doll dance’ and the other major Lanape ceremonies that had come to an end in the 1920s and 30s. She was an encyclopedia of oral traditions and medicines, and had visions in the traditional way—she was the fullest embodiment of the oldest Lanape lifestyle.”

“Welcome back to the land of your ancestors,” said Oestreicher in Lenape by way of greeting the elderly lady upon their first meeting. When she asked to see him again later that day, he told her, “'I want to live the life of the Lenape.”

“And I really meant it,” Oestreicher recalled.

The Life of the Lenape

In the winter, when families stayed inside their bark huts, the Lenape people would tell “winter stories,” according to Oestreicher.

In one such tale, a man considered a town fool was listening to some of his neighbors speak. They expressed a wish for a turkey dipped in grease and left. When they came back, the man was dipping a living turkey, feathers and all, in a vat of grease. They laughed at him and said that he was supposed to kill the bird and pluck it first.

“You should have told me,” was his reply. Oestreicher explained the tale’s message: “Mean what you say and say what you mean.”

“[The Lenape] don't use words lightly; everything is weighed and measured,” he noted.

Touching-Leaves-Woman often came to stay with Oestreicher and his family. They went on outings through the valleys and seashores that once served as home to her people. Oestreicher's younger brother, a sculptor and a painter, became his partner in documenting the fading culture. The words of the elder brother and the art of the younger fused to leave a vestige of the once pervasive culture to posterity.

Touching-Leaves- Woman sprinkled tobacco on the ocean—just as her father had told her to do if she ever returned to the homeland. Tears came to her eyes as she looked upon effigies from her people's ceremonies. The traditional dance they had been used in died out in 1924, with the last visionary who knew the songs.

The stories of Henry Hudson's arrival on the shores of Manhattan to found the Dutch colony of New Amsterdam were still told among the Lenape of Touching-Leaves' time.

In 2009, New Yorkers celebrated the 400th anniversary of Henry Hudson's founding of the Dutch colony of New Amsterdam on what is now Lower Manhattan. Oestreicher was invited to put together a Lenape exhibit at Ellis Island to commemorate the people that met Hudson's ship.

Many Lenape came from the diaspora—Ontario, Oklahoma, and Wisconsin—to reconnect with their roots. A few individuals keep the language alive, and a website helps to this end: www.talk-lenape.org.

Oestreicher works to carry on the last wish of Touching-Leaves-Woman.

“Her wish was two-fold: that the Lenape people [would] be remembered, and that those of us who live in the East take good care of the land of her ancestors.”