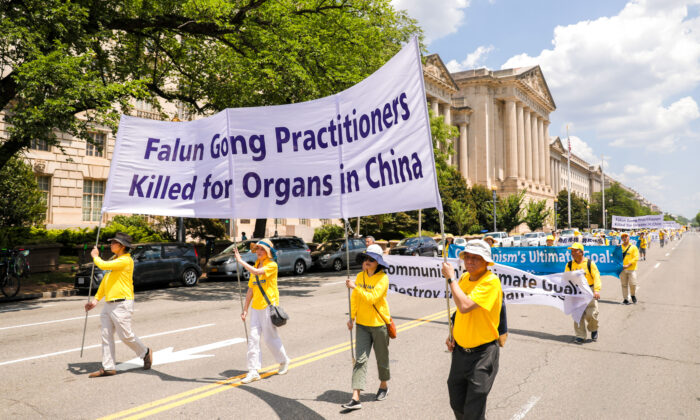 Falun Gong practitioners take part in a parade marking the 22nd anniversary of the start of the Chinese regime’s persecution of Falun Gong, in Washington on July 16, 2021. (Samira Bouaou/The Epoch Times)
Organ Harvesting in China

A ‘Blunt Attack’ on Human Rights: EU Lawmaker Urges Europe to Use Trade to Hold China Accountable for Organ Harvesting

The last time the EU acted on the issue was in December 2013, when its legislative body adopted a resolution condemning the organ transplant abuse. Since then, however, “it was silence all over the place,” said Peter van Dalen, a Dutch politician serving on the European Parliament’s Subcommittee on Human Rights and a co-chair of the Parliament’s Intergroup on Freedom of Religion or Belief and Religious Tolerance.

Such inaction was unacceptable, given the severity of atrocities committed by the Chinese Communist Party, he told the audience at a conference on organ harvesting at the Press Club Brussels Europe, stating that he’s fighting an “uphill battle” to get the issue on the European agenda.

In June 2019, the London-based China Tribunal concluded that the Chinese regime has been killing prisoners of conscience for their organs and that the state-sanctioned practice has taken place “on a significant scale” throughout that time.

A hearing on this may take place in the coming months, van Dalen said.

“We do not want to attack China on sensitive issues like organ harvesting, but I really think we should, because organ harvesting is really a very blunt attack on basic human rights,” he said.

A major factor contributing to the European silence has been Europe’s close economic relations with China, according to van Dalen.

“It’s too much talking about trade, about money, and not enough about human rights and the rights of minorities,” he said.

In May, the European Parliament froze an investment deal with China in the aftermath of Beijing’s retaliatory sanctions on European politicians over the Xinjiang repression.

Van Dalen believes that the investment agreement should be put on hold for as long as the regime hasn’t stopped its human rights abuses.

“We should use this as a whip stick to make clear to China that the violation of human rights is important,” he said.

Countries ‘at a Crossroads’

The principal victim group of Beijing’s organ harvesting, the China Tribunal found, has been adherents of the Falun Gong, a spiritual practice featuring three core tenets, truthfulness, compassion, and forbearance, along with a set of meditative exercises.

The practice had been taken up by nearly one in 13 Chinese people by 1999, according to estimates at the time, before the regime began a nationwide persecution campaign designed to extinguish the faith.

Gary Cartwright, publishing editor of London-based media EU Today and one of the event organizers, said he didn’t want to believe it when he first heard about Beijing’s organ transplant abuses.

“When I started to do my research, it’s not an exaggeration to say that sometimes I had to just close my computer and walk away and take some deep breaths,” he told The Epoch Times, calling it “one of the most dehumanizing policies that I’ve ever come across.”

Cartwright said he feels guilty that such abuse is happening “on our watch” in the 21st century.

Like the Dutch politician, Cartwright believes that Western countries need to reassess their priorities in the face of the regime’s apparent disregard for human rights.

“More than 70 years after the horrors of the Second World War, we were told these things could never happen again. And we see it happening in front of our eyes,” he said.

Andy Vermaut, journalist and human rights advocate who co-organized the conference, highlighted the lack of public attention on this grisly practice.

Cartwright, like van Dalen, believes that Western countries need to reassess their priorities in the face of the regime’s apparent disregard for human rights.

“Given that we know what’s happening in China, why is the European Union doing business with this regime?” he asked.

It “threatens democracies everywhere, as it violates universally held principles of how societies need to function successfully,” King said at the conference.

“Europe and indeed every single world state,” he said, “are at a crossroads, a crossroads that will determine their very future.”

Li Yue contributed to this report.