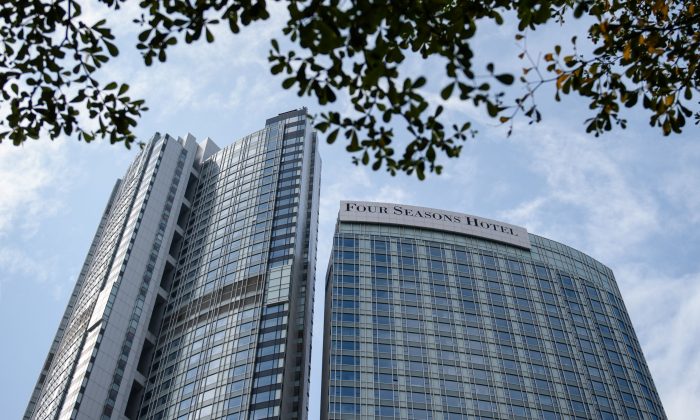 The Four Seasons Hotel building in Hong Kong on February 1, 2017. A Chinese billionaire has been abducted in Hong Kong by mainland agents, according to reports on January 31. (Anthony Wallace/AFP/Getty Images)
China

Xiao Jianhua, the Chinese billionaire who recently made headlines after going missing from his apartment in Hong Kong, has long been involved in the dealings of the Chinese Communist Party elite.

Xiao, a 45-year-old Canadian citizen with a diplomatic passport from Antigua and Barbuda, appeared to gain the trust of the Communist Party for opposing the Tiananmen Square student protest in 1989. Then, Xiao was studying in the prestigious Peking University, and headed the college’s student union.

After graduating, Xiao made his first fortune as a personal computer reseller, then speculated in stocks and became an investor. Today, Xiao has investments in banking, insurance, property, and rare-earth metals, and was worth about $5.8 billion in 2016, according to the Hurun Report, a magazine which ranks China’s richest.

Xiao recently came under the media spotlight after he suddenly went missing from his luxury apartment at the Four Seasons hotel in Hong Kong where he is based.

First, Hong Kong and overseas Chinese news media reported that Xiao had been arrested and brought to mainland China. In responding to Xiao’s whereabouts, Hong Kong police said in a statement on Jan. 31 that “the subject” had crossed the border into mainland China on Jan. 27. Xiao’s family had filed a missing person report on Jan. 28, but retracted it a day later; one family member said that Xiao was safe.

On Jan. 31, Xiao’s company, the Tomorrow Group, posted and later deleted two social media messages where Xiao claimed that he had “not been abducted” but was merely “recuperating overseas” and would speak to the media soon. The following day, the deleted messages were printed in a full-page advertisement on the cover of Ming Pao, a Hong Kong newspaper. Xiao, however, is supposedly in police custody in China, according to an anonymous source of The New York Times.

In light of Chinese leader Xi Jinping’s ongoing anti-corruption campaign, and given Xiao Jianhua’s involvement in the business dealings of the families of many powerful Party officials, it seems likely that Xiao might have indeed been arrested by Chinese police and asked to assist with corruption investigations.

However, it is unclear which group of Party elites Xiao is presently cutting a deal with.

The Chinese economy, the second largest in the world today, may seem capitalist. But the Chinese Communist Party never fully relinquished control over key industries in China.

Many state or publicly-owned industries are in the hands of family members of top Party officials. However, the Party elites won’t appear to be directly connected with their business holdings because they cover their tracks through agents like Xiao Jianhua.

In 2012, a company owned by Xiao bought shares worth at least $2.4 million from Qi Qiaoqiao and Deng Jiagui, the sister and brother-in-law of Xi Jinping.

Yet in 2006, Xiao also appeared to help Zeng Wei, the son of former Party vice-chairman Zeng Qinghong, acquire Shandong Luneng through a series of shell companies owned by Xiao. Shandong Luneng was a state power company that had then been privatised.

Zeng Qinghong is the consigliere of Jiang Zemin, the former Party leader whose powerful political faction is being purged by Xi Jinping’s anti-corruption campaign. Xi’s campaign is aimed at consolidating his control over the Chinese regime.

Xiao Jianhua, who has handled the business affairs of members of Jiang’s faction and Xi’s relatives, can be considered a valuable asset to both sides. Just who is using him, and how, remains unclear.