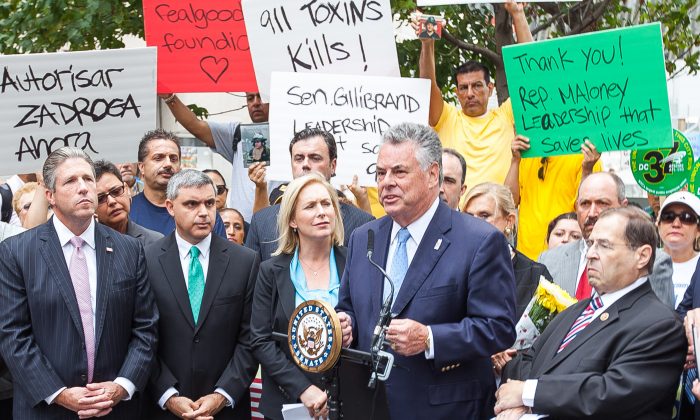 NEW YORK—On Sept. 11, 2001, Joe Zadroga could never have imagined what the terrorists were going to take away from him, nor that his own government would add insult to injury, or that he would still be fighting the aftermath of the tragedy 13 years later.

Zadroga could have actually felt proud—at least in part—as his son James, an NYPD detective, was one of the thousands of rescuers at the site of the World Trade Center towers immediately after they were struck by airplanes flown by terrorists. His son helped his city–his nation–begin the long road to recovery. His son was a hero.

Yet it didn’t take long before the hundreds of hours James Zadroga spent in the toxic rubble began to take its toll. A healthy man, just over 30, was suddenly short of breath. Five years later he died of a respiratory illness.

An autopsy found foreign material in his lungs and a New Jersey medical examiner concluded the officer died because of breathing harmful dust at Ground Zero.

The family then turned to the NYC medical examiner for a review, but the result was aggravating. Chief Medical Examiner Charles Hirsch said the detective died from prescription drug injections.

The family resisted the assessment. The father said the city wanted to conceal that people were getting ill because of working at the site.

Another examination by a state forensic pathologist finally verified that the ailment was caused by the dust. James Zadroga became the first of thousands of victims of the attacks’ aftermath, and that number is still rising.

Named the James Zadroga Act, a bill was signed by President Barack Obama in 2011 to pay for medical expenses related to post-9/11 illnesses not covered by individuals’ insurance. Compensation for victims was also reopened, so people could continue to collect money for economic and quality-of-life losses.

About 60,000 have registered, some $800 million has been paid out in medical bills, and $300 million in compensation has been awarded through the act. But it will expire in October 2016, with some parts expiring as early as October 2015.

Despite his strong build, Joe Zadroga teared up Monday explaining to reporters near Ground Zero about why the federal government should continue to help with medical bills for people like his son. “They got citizens on their shoulders,” he said. “Now it’s time for the government to carry these responders.”

A lineup of Congressmen and Congresswomen gathered with Mayor Bill de Blasio and some of the affected in front of the 7 World Trade Center to announce a push for re-authorization of the act for another 25 years.

“The bill will expire in 2016, but their illnesses are not going to expire,” said Congresswoman Carolyn Maloney.

“Where we forget the victims of 9/11, we have forgotten 9/11,” said New York Congressman Peter King.

Of the 60,000 people monitored for ailments, over 30,000 are sick because of working at the site—almost 3,000 with cancer, the legislators said.

King, a Republican, said the bill isn’t a partisan issue, but a moral issue and he will explain this to his colleagues.

But it was his party that filibustered the bill back in 2010 over cost and expiration date concerns.

The original bill asked for $7.4 billion and a 10-year duration. It had to be cut to $4.2 billion and 5 years to get 31 Republicans on board and ensure its passage. How the snarled up legislature will react to the proposed 25-year extension remains a question.

The difference is, King said, now there is already a system in place.