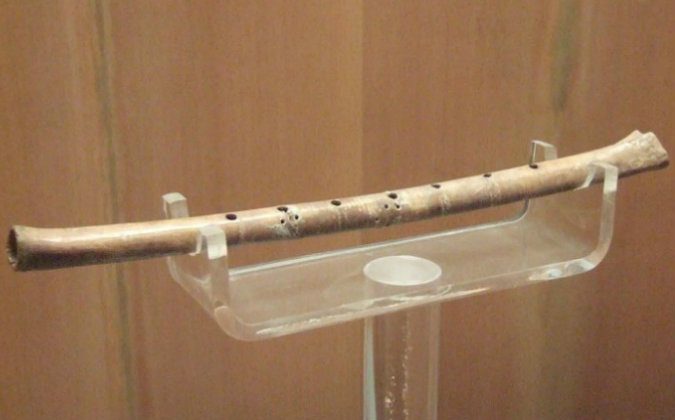 Researchers in China discovered six complete ancient flutes made of bone belonging to the Neolithic period carbon dated to about 9,000 years old. Fragments of many more flutes were found in the same area too. The flutes are complete playable flutes made of the bones of the red-crowned crane with five to eight holes. The area that they were discovered is Jiahu of the mid-Henan Province.

What is interesting is that the music played through the seven holes corresponds to a tonal scale extremely similar to the eight note scale used today. Although this sounds like a minor detail it is a very important discovery that is also quite amazing. The seven musical notes that we use today and the tone scale used have harmony that is distinct and is based on complex acoustic properties. Is it coincidence that whoever made those 9,000 years old flutes and generally people from all over the world (Africa, Asia, and Europe) were able to come up with scales reflecting all these acoustic properties just by simple chance?

Ancient flutes are not something new. In 2008 in a cave in Germany the ‘Hohle Fels Flute‘ was discovered made from a vulture’s wing bone with five holes and it dated back more than 40,000 years old. In the same cave the oldest figurine of Venus was found, dating back 35,000 to 40,000 years.

All those artifacts are extremely strange and make you wonder ‘how’ and ‘why’. Most people have in mind that ancient people were savages hunting and just living like animals. It is difficult to imagine the same people playing music in the exact same way that we do now. Unless of course what we know about them and their ‘primitive ways’ has been completely wrong – something that many of studies have begun to prove.

The area of the Central Yellow River Valley in mid-Henan Province is an archaeological treasure since only 5% of the area has been excavated and thousands of artifacts, houses, pottery and more have already been discovered.

You can listen to the music being played by this ancient 9,000-year-old instrument here.